Richard Wagner from 200 Years Ago 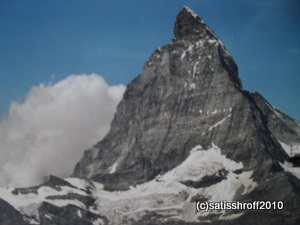 Richard Wagner was born 200 years ago on May 22 in Leipzig, and went to school there, as well as in Dresden, where he studied  literature and music. He became a choir-conductor in 1833 in Würzburg and changed to Bad Lauchstädt, Magdeberg, Königsberg and Riga.

He married an actress Minna Planer but it didn’t last long.  Since she had a lot of debt, he fled from Riga to Paris and later returned to Dresden, where he worked as the Hofkappellmeister. It was here that he studied the German epics of the Middle Ages, which became the literature of his famous operas.

Since Wagner had liberal ideas he was obliged to take part in the May revolt in Dresden in the year 1849. An arrest order was issued for him but he managed to flee to neutral Switzerland. In Zürich he wrote a lot of essays, one of them being ‘Opera and Drama’ and the anti-Semitic work ‘Das Judentum in der Musik.’

Richard Wagner’s hatred of the Jews is a big hinderance even today for the proper reception of his works. A good many people in Israel and elsewhere don’t want to be receptive to Wagner’s music due to his vehement antisemetism as you can see from his various texts, and most of all the above-mentioned one. It was Wagner’s pathetic Germanism and his anti-semitic stance that made him unanimously the official composer of National Socialism. Adolf Hitler was a well-seen guest during the Beyreuther Festspielen and his favourite Opera, which was based on a mythology from the Middle Ages in which Lohengrin fights in the Court of the Gods against Telramund for the dignity of Elsa, the throne-follower of Brabant, whom he takes as his wife. But when she, nevertheless, asks the forbidden question about his name, he is forced to leave her. Gottfried, who is Elsa’s brother, comes in his place.

However, there are Jewish musicians such as Daniel Barenboim who draw a sharp dividing line between ideology and work. There are others who think that the Weltenbrand (world-in-flames) featured in the opera ‘Ring des Nibelungen’ is nothing more than the elimination of Jewism from the world. Director Coppola took the Nibelung as the leitmotive of a US colonel who plays Wagner’s music in ‘Apocalypse Now’ as the helicopter crew fire rockets and create the Vietnamese jungle of fire in a bid to eliminate the Viet-Cong. A weltenbrand in the moviegoer’s memory with the help of napalm-bombs. The tongues of fire licking in the sky also devoured books by authors who were declared by the Nazis as being ‘entarted.’

Satin and silky clothes played an important role in Richard Wagner’s life for he needed to feel the texture of the sensual textile on his skin and the smell of perfume, and it became a substitute experience while writing texts and composing operas because the main theme was love, sensuality, betrayal and death.


In order to write and compose his operas he had to love other people’s wives as an on-going reality script. He loved to play with fire, love, sensuality in order to be creative. He also had to travel to places like Vienna, Venice, St. Petersberg, Moscow, Paris, Rome. He also thought that he belonged to another race, than the Jews, and Cosima also defended these ideas with him against the outside world, even though they had enough Hauskrieg of their own, for all was not harmony and love in their marriage.

In ‘Tannenhäuser’ which is Richard Wagner’s biggest romantic opera, in the first Act inside the Venusberg (Venus-hill) nymphs, lovers and female Bacchantines dance around  Tannenhäuser and his beloved Venus. He pulls Tannenhäuser back to the kingdom of humans along with his pain and says: ‘I must flee from this kingdom, O Queen, Goddess! Let me leave.’

Later Tannhäuser is torn between sensuality and pure love, that is, between Venus and Elizabeth and returns to the Venusberg. This magical, sensual Venusberg has inspired generations of stage and film directors to unleash their own fantasy and sensuality, thereby shocking every generation of opera-goers everywhere and especially Beyreuth, which has always been a trendsetter. As a result the opera-audience has great expectations: naked gracile females and muscular males, nymphs, bacchantines, amorettes and lovers clinging to each other’s bodies caused irritations and eyebrows to be raised behind the opera-glasses. A Wagner opera is a happening and the surprise depends upon the fantasy of the director-in-charge.

Wagner’s wife Cosima didn’t share his obsessions and remained cool, businesslike and not given to sentimental emotions. She had three children with Wagner. Wagner married Cosima in 1870. He already had three illegimate children Isolde, Eva and Sigfried from different affairs. Although she was 24 years younger than Richard Wagner, Cosima was the resolute figure in the family. After Wagner’s death in Venice in 1883 she became the unchallenged Lady of Beyreuth. Her diaries about the daily life of Richard Wagner were published in as late as 1976.

Richard Wagner wrote in1858 to his first wife Minna: ‘Dresden is the town where I am at home, and elsewhere I’m a stranger.’ It was in 1862 that Saxony’s Ministry of Justice granted him a return without charges.

It is interesting to note that besides Dresden, Zürich and Beyreuth, the Swiss town of Luzern with its quaint wooden bridge was an important Wagner town. Wagner loved the Vierwaldstättersee, the Lakes of the Four Cantons. Wagner, Cosima and their children lived for six years in a house in Tribschen, which is now, of course, a Wagner-museum. He completed his work ‘Meistersinger von Nürnberg’ here.

Wagner lived from 1849 till 1858 in Zürich where he’d fled to as a refugee. And these were his most creative years. In Zürich he completed a part of the ‘Ring des Nibelungen,’ the ‘Wesendonck-Songs’ and the ‘Züricher Kunstschriften.’

‘Who were inspired by Richard Wagner?’ you might ask. Poets and novelists from Verlaine and TS Eliot to Thomas Mann and Marcel Proust.

‘Where did Wagner get his inspiration?’ It was in the German operas that were developed by stalwarts like Mozart, Beethoven and Weber that inspired him. He developed his own concept of musical-drama in which poetry and music fuse together. Like a writer who finds his own voice, Wagner found his musical voice in his creations: Flying Dutchmann, Lohengrin and Tannhäuser. The midpoint of his new compositions was the idea of the leitmotive, which was connected to a protagonist, symbol or thought-process and which recurred in the work.

His opera-cycle ‘Der Ring des Nibelung’ is a complex system comprising: melody, harmony and contra-point. The entire work revolves around a simple accord or an introductory phrase. Wagner didn’t prefer the arie and recitation. The song became an endless melody.

The opera ‘Tristan and Isolde’ culminated in the masterly control over the orchestra, with his own Wagner-tuba creating a new sound. For this work he crossed the border of tonality and combined emotional effects and bound distant tones with each other.

If you happen to be in Bavaria do visit the opera-house which was built in 1876 for that’s where the yearly Wagner-Festspiele take place. It’s a big cultural happening for Wagner-lovers from all over the world, and the chic people of Munich. If you have the time and the inclination, I’d suggest attending the 4-day musical project ‘Der Ring des Nibelungen.’ If you don’t have the time at your disposal then ‘Tristan and Isolde’ might suffice for your thirst of Wagner’s song-and-music because it’s a musical drama about love and death. His music makes it clear from the beginning that love between the two can only end fatally.

Even the great-grandchildren of Richard Wagner are divided: Eva and Katharina make the news when they bring in critical deviations in the Wagner operas. There’s a rebellious Gottfried Wagner who has brought a timely book in which Richard Wagner is depicted as ‘a racist, women’s enemy and extravagant person.’ Be it as it way, do listen to his music and operas. A critic defined Wagner’s ‘Der Liebestod’ as a composed orgasm which has a narcotising effect. Even though his diction was poor, his music was heavenly. I’m indicating the mythological heaven. Yes, Tristan and Isolde promise love and passion to each other accompanied by intensive sensually-loaded music in Act Two. Alas Tristan dies in Isolde’s arms. After which she dies the ‘Liebestod,’ the Death of Love. Love reaches its zenith through Death. The most beautiful passage here..