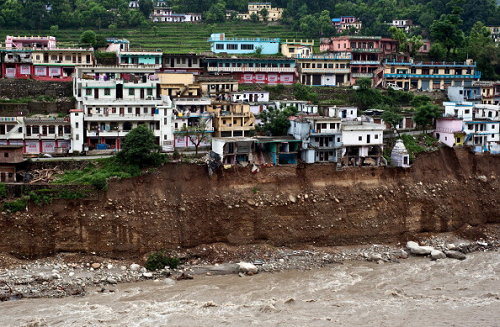 On June 16, 2013 following a cloudburst there was unexpected flooding causing unprecedented damage to men, animals and structures. It is not possible to pinpoint the cause of this havoc, but the planning of the dam constructions in such a terrain has not been very prudent, considering the Himalaya is a young mountain and forms collison between two plates, namely Indian plate and the Tibetan plate

There is now a raging debate whether Uttarakhand disaster is man made or natural. I should not say it is naturally man made or the other way. Whenever there is some development, specially in hilly terrains or in forest lands, it is done at the cost of nature. Wisdom lies there, if the planners can strike a judicious balance between the two so that the nature is not destroyed and at the same time the work is satisfactorily carried out.

The Himalaya is a very special case, and is very important to us in India. Besides the religious and mythological aspects that beset each heart, let us consider the scientific part. To study the geological aspects there is a full fledged organization ‘Institute of Himalayan Geology’, located in Dehradun. There are institutes to study the earthquakes, medicinal plants, the river systems, water resources, forestry, land use and several other aspects. There are modern tools and techniques like remote sensing, modeling, geodaetic and geological mapping, earthquake zoning etc among others.

It may be kept in mind that the Himalaya is relatively a younger mountain range compared to India’s Western Ghats, Eastern Ghants, the Vindhyas etc. The Himalaya is geologically an active zone; the Indian landmass, called Indian plate, is going down the Tibetan plateau, called Tibetan plate, causing several earthquakes from Kashmir to Burma border. While Indian plate is subducting, the northern plate is thrusted up giving rise to many deep-seated faults along which several rivers like the Indus, the Brahmaputra, the Ganga, the Yamuna and their tributaries flow. The presence of many rivers in Uttarakand shows the network of faults and how the land is dissected. It may further be noted that a mountain is not built by solid hard rocks, specially the Himalaya that consists of fractured rock masses and soil, very susceptible to erosion and landslide.

Because of great elevations and the presence of soft rocks coupled with isostatic adjustments the erosion is very high. Deforestations add further woes. Now it may be clear why man-made structures that do not take geology, soil conditions and plate movements into consideration shall cause devastation. The presence of Tehri dam, though hurried clarified that it saved Rishikesh and Hardwar, can be a cause of great worries, since it obstructs the smooth flow of water in the rivers.

Nature is complex. There are many factors that need to be looked into. The civil engineers and the dam experts may be right in their structural designs and at the same time possibly not fully considering their impact on the environment. The cloudburst is an unexpected event, but such conditions need to be included from the design point of view at the very outset.

The conservation of environment and human lives are, for sure, more important than building a city or generating more electricity. While the policy makers wish to have ‘breaking news’ and engineers want to show their expertise to construct dams at high elevations and under risky conditions, more care needs to be taken, specially for the Himalaya that controls India’s climate, prosperity, security and culture.