On Insect’s Nest and Other Poems

Aju Mukhopadhyay is a renowned bi-lingual poet and writer who has authored a dozen books in Bangla and almost equal number of volumes in English. Currently he lives in Pondicherry, a place that has been hallowed by the spiritual presence of one of the most illustrious sons of Bengal-Sri Aurobindo. 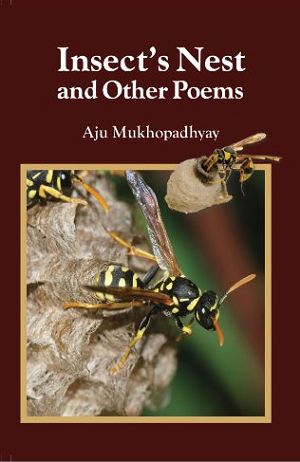 Mukhopadhyay’s latest book of verse entitled Insect’s Nest and Other Poems is neatly printed on good quality paper with an attractive cover page featuring wasps building their homes. The publisher’s honesty in bringing out the book is most prominently visible in the almost negligible number of typographical errors. M/S Prasoon Publication, Gurgaon, Haryana needs separate praise for maintaining their quality paperback printing. For in our country, we have been successful in ensuring excellent poems and poets while failing most often in setting up any common standard of professionalism in print and publication. Perhaps Mukhopadhyay is very much aware of this fact through his vast experience as a poet. And that is why in the small dedicatory epistle, he acknowledges many of his exemplary poetry-editors and fellow authors with whom he must have been sharing sweet memories.

I too have the privilege of being one of the humble poetry-editors of Mukhopdhyay as once I selected along with my colleagues some of his poems for our journal. This particular incident has ultimately given me this golden opportunity to come near him, to listen to his words more intimately and to be allowed by him to review his latest book of verse. As I open the book and look at the index, I find forty five numbers of poems with individual titles being put under three large groups with separate captions. The first group includes eleven poems and is called ‘With Nature Again’. The next group of twenty two is entitled, ‘Already with you, humans’. And the rest are put under, ‘Looking the other way’. Interestingly, this final host of poems contains those pieces which I once chose to publish in the inaugural issue of Impressions of Eternity. Going back to how I read these verses earlier, I find that these were described by me as poetic utterances on the themes of human existence, its evanescence, and its redemption from vagaries of life. As I now review Mukhopadhyay’s book by re-reading the old poems beside the new poems present there, is it not that I mentally revisit my own perception about Mukhopadhyay as a poet?

Looking closely at the captions of the three different groups already mentioned, I get an impression that perhaps Mukhopadhyay intends to re-examine here the ‘Natural World-Human Existence-Spiritual Essence’ relationships which have also been the chief concern in both the Upanishads and the poetry of Sri Aurobindo. What we call modern Indian English poetry after Nissim Ezekiel is in fact a kind of creative assay which stands in an oedipal relation with this particular tradition and abuses it with the modifiers now well known-romantic, nebulous, verbose, and transcendental. But as A.K. Ramanujan has described in his Indian Oedipus, it seems that Mukhopadhyay’s relation with this tradition is probably that of Rama’s relation to Dasaratha or Puru’s to Yayati. This is actually a reaffirmation of the merits of the tradition notwithstanding serious interrogations into the past.

I read the first poem of Mukhopadhyay’s book and find how the non-human world could evoke in human mind the sad knowledge of transience of the life-breadth:

Ain’t all the great construction
like insect’s nest
brittle and fragile
sure to go
today or tomorrow
measured by time?
Why bother about any mark made of lime?
(Insect’s Nest/9)

The poet is very close to Thomas Gray. All paths of glory lead us to the grave. Or in so successfully evoking the most tragic feeling of evanescence the poet also echoes Sankaracharya. When death knocks at one’s door there is nothing which can reverse the thing impending, no knowledge comes in help. Valmiki too saw the dying Krauncha and poetry welled forth from the adikavi’s heart. The insect in Mukhopadhyay’s poem is much more insignificant a creature but it is after all living being like us and shares in the common threat of death.

Mukhopadhyay crafts one haiku like poem. It is terse and highly suggestive like the verses of Ezra Pound. It connotes ‘the end’ of which we have heard much though there is no record of anyone’s direct experience of it. The poem is thus shaped as a series of questions:

Is it the shadow of a growing dark cloud
over the pond in a moonless night?
Is it the voiceless echo of a sound
flashed in the dark announcing the fight?
(What is Impending/15)

In the ancient Tamil poems of the Sangam age one may be astonished to see an organic relation between external nature and human society. The relation could be experienced through the proper understanding of the imagery of the Tamil bards for whom a “flowering kurinchi” was a young woman, or “red earth and pouring rain” were lovers busy in love-making. Natural world and human world stands here in metonymic relation, for by catching one properly the readers may catch the other. In Mukhopadhyay’s poems too the insects or the golden orioles are not simply ‘like’ human beings, they in fact form one part of the living world while the humans together form another. The eternal law of the universe applies alike to both nature and human beings. With this new knowledge, there is a melting down of the human-non human, man-nature, and existence-essence, body-soul-distinctions and hierarchies. What the Upanishads reiterated, Ramprasad said, or Aurobindo philosophized, Mukhopadhyay also writes:

Beyond all ceremonies,
cultivating the inner being
shedding all disharmonies,
we could become the life’s king.
(Cultivating the Human Being/27)

Modern Indian English poets despised most in Sri Aurobindo’s spiritual quest. They say the philosopher and mystic Aurobindo killed the poet Aurobindo. Especially Nissim Ezekiel called him “a very bad poet” who always wrote about soul in a highly Latinized English. Hence moving against Sri Aurobindo and his followers the New Poets wished to infuse their own poems with the “smell of the earth” and the “blood of reality”. But by reading any of those modernists the sensible readers would find that their chief tool of protest has been irony, which is not at all a weapon of the bold. Marx and Engels needed no ironic expression to call the workers of the world to unite. The modern Indian English poets no doubt talk about their country as a place full of problems, e.g. poverty, unemployment, communal disharmony, and corruption. But do they have that total commitment needed to change the world? These ironic versifiers lack in courage to state problems at its face. As a poet of the contemporary period it is really unique in the case of Mukhopadhyay that while writing about the essence he could also put forward very explicitly his earnest concerns about the miserable state of human existence. Like the poets of the Bhakti movement, reality for him is both immanent and transcendent. Like Kabir or Basavanna, he is capable of speaking about human problems in loud and clear voice:

Among the various hungers, many a need
hunger for food and drink
is the basic urge of life;
until this basic need is fulfilled
till for hunger and thirst humans sink
the greatness of life cannot survive.
It is futile to talk about peace
until the fire of hunger we extinguish
in every human being
if not in every living thing.
(Hunger and Thirst/28)

With equal force, he can write about structural violence, about the problems of the Adivasis, comment on terrorism, and debunk the ideologies of the fundamentalists. Mukhopadhyay could write on abstract ideas:

Aren’t we on earth
floating in a multiverse
in space infinite
with stars in oodles numbers?
Look within!
stars are blooming and dying
constantly.
(Stars in Space/60)

But he is equally efficient in rendering abstract things concrete:

Peace is like a sleeping pregnant cat
on top of the hay stacked in a barn.
Peace is like a child’s sucking sound
from the round breast of its mother
. . . .
Peace is faithful surrender to the divine
Peace is enchanting shower.
(What Peace is Like/42-43)

In this trouble ridden world he is there for the shower of peace. That enchanting shower comes after long drought and disorder or its worth could not be appreciated by us. Exhausted by hunger and thirst, shaken by terror and death, exploited by the vicious social systems we ask for grace. In Srivaishnavism, there is a description of two ways of grace: the cat’s way and the monkey’s way. In the cat’s way the human beings are like kittens that are all the time helped by the divine force or the mother cat without bothering even of the kitten’s call for help. In the monkey’s way the divine force leaps from branch to branch like the mother monkey and the human beings need to hold her strong so that they may not fall out of her grace. Mukhopadhyay’s poem echoes the age-old notion of falling into grace as he writes:

Rain of grace falls and falls
to soothe my ruffled feelings;
it corrects, it helps, it leads me
always to the right way.
When it rains in the forest of my being
where the tallest trees touch the sky
and the moon shines bright on the leaves
through the gnarled branches
lighting the dark parts of existence,
life becomes wholesome
peaceful and serene.
Removing the dryness and darkness of life
rain of grace falls and falls
perpetually to revive.
(Il Pleut/67-68)

How could the poet escape the impact of Rabindranath Tagore’s songs? Tagore provides necessary signs to Mukhopadhyay so that he may rearrange them in his own poems, in a new system of signification.

It is an experience to read Aju Mukhopadhyay in the context of the various traditions of Indian poetry. As already seen, he is a successor of the old school which the modernists sought to dispense with so that they could justify their own mode of poem writing. But Mukhopadhyay is true to the kindred points of heaven and home. He is writing about the body while writing about the soul and vice versa. He stands with essence while speaking for existence and vice versa. He is a lover of mankind who is empathetically related with nature and vice versa. He is in each and both. He is near perfect. How a kavi could become a rishi is something we may learn at his feet:

Am I listening to a mantra, or a bit of the Upanishad? Is it an example of which Sri Aurobindo termed the future poetry?