The Climate Refugees of Uttarakhand 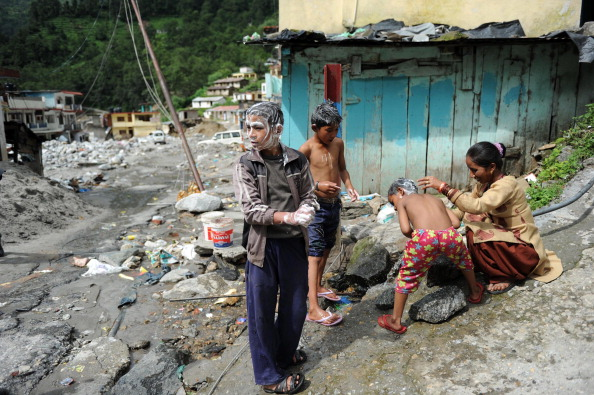 In India we have many kinds of refugees; for example, we have Bangladeshi refugees, refugees due to Kosi floods, Tibetan refugees, Kashmiri Hindu refugees etc. But for the first time a large chunk of population of a state has been so adversely affected by the climate that people have become refugees in their own state. Uma a teenage girl from Bhyunder, a small village of 99 families, enroute the Valley of Flowers, now in a relief camp, says her family has no option but to migrate and beg on the streets of a metro!

Like hers there are several shocking stories. Bhyunder, a non-descript village had suddenly prospered as it provided trekkers on way to Valley of Flowers a place to rest, have tea, hot pakauras or lunch. It was the number of tourists that had changed the economics of the village. The villagers were able to grow crops of potatoes to serve to the tourists on their small holdings, now everything is washed away and so are the hopes of the villagers!

The state government did their best to encourage tourism in Uttarakhand. The number of tourists rose from 110.11 crores in 2000 to 300.11 crores in 2011, says a newspaper report. It was anticipated that by 2017 this number would double. Alas, while doing this jugglery of figures the state forgot one most important factor that is, the NATURE. This June, it rained 375% more than previous years-a record in itself. Plus much of it rained from 10 to 20 June. The problem is that one cannot wish away rains and or earthquakes. Secondly, due to Greenhouse effect sudden rains and sudden droughts are going to be a routine. As of today, the type of rain which Uttarakhand experienced is once in 100 years, but in near future it is likely to occur in a ten year cycle say the climate experts.

The irony is that the survivors have become refugees in their own land, while scores have died unsung and unknown to their families. They were busy hauling pilgrims to Kedarnath on their mules, ponies, dandies etc. Their families have lost livelihood. Bhyunder is a ghost village now and the future for the residents is bleak because all their agricultural holding has been washed away in the rains.

One might have remained ignorant about the possible mishap of this scale in Uttarakhand, but it was in the offing and the nature had given adequate warnings in the form of heavy landslides in the preceding years. Even in routine the Himalayas are prone to disasters. The statistics of the UN say that the present disaster of Uttarakhand was just one of the 76 disasters that hit the Himalayan region killing 76000 people and affecting 178 million people every year. It further says that between 1990 and 2012 the Himalayas within the Indian territory were hit by 532 natural disaster. During the same period the Chinese territory was hit by 670 natural disasters.

Unfortunately these disasters are not controlled by the political boundaries. A heavy landslide on the Chinese side can block the international rivers like Satluj. Once the blockade is removed, the sudden release of waters can cause heavy damage on the downstream side. The memories of damage to the Nathpa-Jhakri power project on the Satluj River in Kinnaur district of Himachal Pradesh are still afresh.

However, in the instant case of Uttarakhand the nature was at its angriest moods and unfortunately, the tourists and the pilgrims had to confront it in their most jubilant moods. The losses were colossal.

The future of the mountain dwellers appears to be bleak, as per the climate experts. They expect frequent bouts of heavy rains. This would mean more floods. Naturally the rivers will have to carry more and more sediments. This will reduce the carrying capacity of the rivers and in turn cause problems for their main body in the plains. The streams are likely to be almost choked with sediments.

The whole pattern of climate change needs a relook in to our ways of living, location of safe sites for dwellings and also the methods of agriculture. In addition to climate problems, the atmospheric pollution, for which we are responsible, is likely to reduce the crop yield at least by 10 to 20%.

Since temperatures are on the rise, it is a positive sign for the vegetation. During the period when the dinosaurs were on the vain, around 65 million years ago, the vegetation was at its peak. Once again the vegetation is going to get luxuriant in the times to come. During the era of the Dinos we were not around. But now we can certainly take advantage of the nature and grow more trees. They will ultimately be our saviors.

Uttarakhand will have to develop extra cautiously. The technology imported from the plains for construction of houses and their locations too will be of no use. The government will have to engage geologists and other experts to relocate some 277 villages that have been ruined by the catastrophe. If immediate steps are not taken, more and more people will become refugees in their own land.