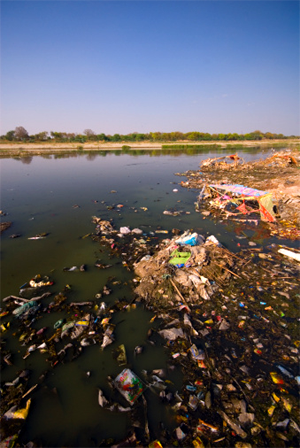 Traditionally Huang He or the Yellow River of China was known as the river of sorrow, due to its notoriety in causing floods every year. Similarly, following the bad reputation of causing vast floods, River Kosi, one of the largest tributary of Ganga in Bihar, became the second river in Asia to be called a River of sorrow. But here the rivers that are being discussed are rivers of sorrow not because of natural causes like the floods. They have become miserable rivers because of our misdeeds.

Sometimes, I feel that the present day rivers of the country, particularly of the plains of Ganga and Yamuna do not have water, instead they carry their own tears. We have polluted them to the best of our capacity to the extent that today, their water is untouchable.

A recent report of the Central Pollution Control Board (CPCB) says that water of around half of the rivers of the country is not fit for human consumption. Mind you, the CPCB is the country’s pollution watchdog. Their statement makes it official; otherwise all of us know how bad the condition of the rivers is! In the northern plains, at many places the stench from the river is such that one cannot stand even on the river bank. Ganga, a river most revered by the Hindus, is so polluted that at the cremation ground on the right bank of the River at Kanpur, one cannot even wash his feet, what to think of taking a dip!

After conducting a detailed survey and sampling of 445 rivers across the country, the CPCB realized the gravity of the situation. They found that out of 1275 river monitoring stations, the rivers in one fourth are such that one cannot even take a dip in the rivers and at those places even the aquatic life is not present. The very absence of the aquatic life from such spots is evidence enough that there is hardly any oxygen in the water there!

The decline of the quality of surface water, specially the rivers, has not been overnight. It had begun way back in the British times, when they (the British) started making drains across major towns on the river banks, to carry the town’s waste waters to the rivers. The saints say that the British knew that that the Indian culture is all about the rivers, thus if the rivers are badly polluted, the very cultural backbone of the country will be broken. May be they were right!

But alas, even after the departure of the British, we continued to foul the rivers and there is no respite even now. As per the CPCB estimate in the year 2011, daily about 38000 million liters of urban waste water including the industrial waste, reaches the rivers from towns with population more than 50000. This study was based on a continuous study from 1995 to 2011. It was found that in 1995 half the quantity of waste water used to reach the rivers.

Sad part is that merely one third the quantity of this waste water is treated before it reaches the rivers. This is mainly because we do not have sufficient numbers of the Sewage Treatment Plants (STPs). If we go by the projections of the volume of waste water that will reach the rivers by 2050, the figures are horrifying. It is estimated that by 2050, the urban waste water would cross 100,000 million liters per day (m.l.d.) mark and the rural 50,000 m.l.d. Imagine the gargantuan task that confronts the managers of the country. We are ill-equipped at present and if no concrete steps are taken the future of the surface water, is dark.

Ganga valley is the cradle of modern civilization in India. More than 40% of the country lives in Ganga Valley. Since times immemorial the Ganga and its tributaries have been enriching the plains by leaving layers of sand and silt during the floods. These floods, though a bane for the mankind, are actually responsible for enriching the soil of this valley. Naturally Ganga Valley became a haven for early agrarian communities; leading to present day densely populated Ganga plains.

Similarly, the ‘Khadar’ (an area adjacent to the river banks-often a few kilometers wide on both banks) is ideal for cultivating sugarcane. Thus a large number of sugar factories are present along the rivers. These factories, despite strict regulations do manage to dispose their sewage in the rivers. Industrial towns like Kanpur have been a big headache for the Ganga. It is but natural that the CPCB’s report says that water of Ganga, Yamuna and their 64 tributaries in the plains does not meet the water quality criteria.
Population is one of the major reasons for the decline in the quality of river waters. More population means more mouth to feed. Naturally there is a demand for more crops. To grow more crops, the farmers resort to use of chemical fertilizers.

A few years ago, Geological Survey of India had carried out a study of high incidence of fluoride toxicity in Barabanki district. It was found that the farmers of the district were disposing agriculture waste in the Gomti River. The root cause of sudden increase in fluoride in the tube-wells and river water was the agriculture waste. Unscientific disposal of garbage in the rivers has created a situation difficult to salvage.

Unscientific disposal of garbage results to pollution of groundwater aquifers as well. Groundwater is the source of drinking water for more than 60% population of the Ganga plains. Normally, people take it for granted that the groundwater being yielded by their tube-wells is clean and potable. Alas, the situation has changed now and a proper analysis of groundwater before consumption is a must.

Water borne diseases are galore in Ganga plains. As per a report of the WHO more than 60% morbidity in India is due to water borne infections. It is high time that the sanctity of the rivers is brought back and people start realizing that to survive we need rivers of water and not the rivers of sorrow.