– Art and Architecture of the Guptas

Who were the Guptas? Was the period of this dynasty really a symbol of an Indian classical age? What were its accomplishments in terms of art and architecture? How did it carry on the heritage of the Buddhist era in India?

The first question is easy to answer. Though historical records in ancient and medieval India are not easy to discern – the main question being linear time as evidenced in the Judaeo-Christian tradition and the concept of cyclical time as is usual for Indian historical records – yet there are enough archaeological and numismatic traces to construct a fairly accurate record of the age that was said to be of the Guptas.

While this period is justly famous for the flowering of what is called core Hindu culture, after the Vedic and Buddhist age, yet architectural temples had not as such coalesced into their final form as would be evidenced some 200 years hence, as well as with experiments with rock cut architecture and the free standing temples further south.

At its height, which extended from approximately the 4th century to the 6th century AD, the Gupta Empire included much of north India, with zones of influences extending further south down to modern day Chennai and Pondicherry. It was natural that such an uninterrupted age of relative peace and prosperity brought with it ancillary development in the sciences, astronomy, literature, the lively arts and what is today called Indian philosophy. Some of the greatest pre-medieval Indian poets and writers, among them being Kalidasa, lived and worked during the Gupta age. 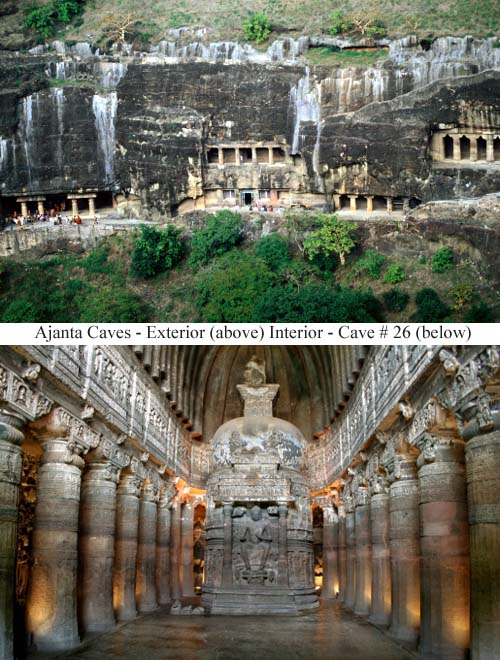 Perhaps the most durable contribution in terms of art and architecture during the Gupta period is the series of monasteries and caves at Ajanta and Ellora. Cut above the natural bed of a river through living rock, the Ajanta Caves are close to Aurangabad and were ‘discovered’ by a British officer in 1818. The caves were dug out through an iterative process roughly contemporaneous with the Gupta Empire, i.e. from the 2nd to the 6th century AD. There are a total of approximately 30 caves, with a substantial number being chaitya halls and viharas (discussed in an earlier piece). 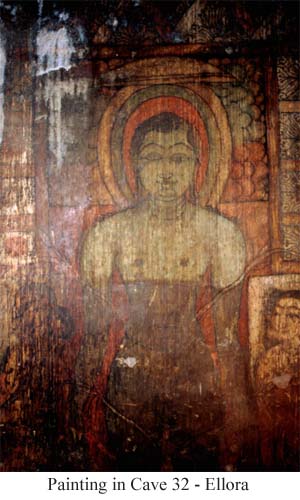 Famous for their paintings, the cave art depicts tales from the Jatakas in a range of styles and forms, though as time goes by an increasing lack of quality is shown ranging from inferior materials to dull, lifeless forms. The earliest caves date from the 1 st century BC, with a second phase beginning in the 5 th century AD, which is when the art of painting during the Gupta era really comes into its own.

Apart from its art, the Ajanta and Ellora caves are significant works of architecture, even though rock cut, in their own right. Most of the monasteries, which take the form of vihara interiors, are rectangular in shape and surrounded by monk’s cells. Later viharas also have place for a small stupa at the end, which doubles as a sanctuary containing a graven image of the Buddha. The viharas are complemented, as in caves 9, 10, 19 and 26 by chaitya halls with a central space leading to the culminating stupa. The use of timber forms as inspiration continues in both viharas and chaityas.

As has been mentioned, the Gupta Empire was responsible, apart from the continuing tradition of Buddhism, for the initial development of Hinduism. The architecture of Hinduism demanded a different approach to its form than earlier Buddhist architecture. For one, the temple or place of worship was said to be in direct communion with the gods, and so an open place away from the cloistered existence of monkish life was required. Secondly, great emphasis was placed on the square and its permutations as far as formal vocabulary was concerned. This lead to early temples, though being simple in their interior plan, to have a form that reflected both: openness to the air as well as being open to the four cardinal directions. In addition, there was a requirement for height, with the main objective being to provide to the worshiper a sense of power as well as ‘closeness’ to the heavens. A superb early example of this philosophic typology is the Vishnu temple at Deogarh, as well as the brick temple at Bhitargaon.

Constructed on a high pedestal of steps, the Vishnu temple suffers much from deterioration through age and exposure to the elements. However, there is enough of its form left to appreciate the new winds of change and the prelude to the architectural renaissance that would take place in the aftermath and late years of the Gupta Empire. With four entrances or possible doorways, and a space to perambulate around the structure, the Vishnu temple is among the earlier examples to contain within itself the feature of a pradakshina path, or circumferential passage, which embodies the symbolism and the ritualism of making one’s way across the cosmos. There is also evidence of a rudimentary shikhara, or spire, constructed of stone laid on top of one another. Structurally speaking, the Vishnu temple is rudimentary, but it does contain within its form powerful early Hindu symbolism. 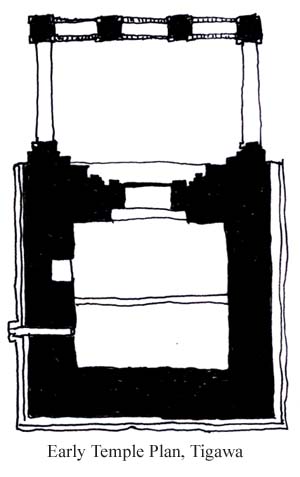 A miracle of survival, the brick temple at Bhitargaon is one of the oldest surviving terracotta/brick buildings from the late Gupta age. Here too a square plan provides the base for a brick spire or shikhara. A possibly new innovation in this temple is found at its entrance, with a vaulted arch being constructed out of brick to mark the entry.

To conclude, while the Gupta Empire was more – and justly so – known for its achievements other than architecture, yet it marks the break between the dominance of Buddhism in north India and the emergence of a full-fledged Hindu culture in the subcontinent. Much of the cultural foundation in arts, literature and science which would go on to become the pillars of the Hindu tradition was laid during this period. However, architecture too contributed – with the first temples and temple forms taking shape. The few examples that survive from this period testify to the legacy of the Gupta monarchs and the cultural phenomena of Hinduism that would dominate the subcontinent for a good few centuries to come.