Krishna in the Mahabharata, true to His name is one of the most enigmatic and magnetic personalities of the great epic. It is perhaps this enchanting mix of the divine and human in one Man that partly explains the attractive spell that He casts. In the Mahabharata, Krishna is not the mere flute playing charming lad who entrances the people of Vrindavana, He is the energetic dynamo ever striving to fulfill the purpose of his incarnation.

At the time of the Mahabharata, Indiawas in the grip of tyrants who had deviated from the ancient Dharma established by the legendary kings of the solar and lunar dynasties like Emperor Harishchandra , Shri Rama, Bharata, Hastin and Pururava. Even Hastinapura, the bastion and capital of the hallowed Chandravansh and leading state of Aryavarta, protected by the Great Bhishma himself, had fallen to abysmal depths under the vicious Kauravas led by Duryodhana and the machinations of King Shakuni of Gandhara. On the horizon of Bharatavarsha loomed the grim evil shadow of King Jarasandha of Magadha who had dreams of becoming an Emperor. He was well supported by Kans, Shishupal, Dantavaktra, Hansa, Dimvaka, Paundraka, Naraka, Salva and Duryodhana who were spreading the wings of adharmic hegemony in Bharata.

On this dark stage appeared the dark youth Krishna, who combined in himself a powerful intellect and passion for Dharma, unconquerable might and courage and a flaming personality which greatly influenced all those who came in contact with him. Aided by his elder brother Balarama, he first struck down his own demonic uncle Kans, the tyrant of Mathura and in a masterstroke of political sagacity, appointed the old and respected King Ugrasena again as the ruler. This altruistic action won him the unquestionable loyalty of the various Yadava tribes and united them under him. His genius and insight into politics and policy was to be Krishna’s greatest strength. This political precocity was based on a remarkable grasp of human nature, although firmly rooted in his vision of Dharma.

Krishna’s next monumental decision was that of abandoning Mathura and the establishment of a new powerful state in Dwaraka, an impenetrable fortress city on the west, by the sea. This saved the Yadavas from the scorching attacks of Jarasandha and allowed them breathing space and time to build up their military and economic strength. The proximity to the sea fuelled international trade and commerce and great ships laden with Dwaraka’s goods crossed the seas and brought in increasing prosperity. This unconventional and prosperous city-state attracted talented people from all over the country.

His alliance with his aunt Kunti’s sons, the talented but disinherited and hunted Pandavas formed the decisive power alliance of the Mahabharata against the Kaurava- Chedi-Magadha juggernaut. The Pandavas shared many of Krishna’s noble qualities and in Yudhishthira, Krishna found the “Dharmaraja”, the future Emperor who would restore Dharma, justice and compassionate rule in Bharata. In Bhima, the second Pandava, Krishna found immense might and a simmering wounded rage which if properly channeled and directed could raze armies and powerful warriors to dust. The Yadava genius used this powerful weapon called Bhima against the haughty Jarasandha, who like so many before and after him underestimated Bhima and finally paid the price by licking the dust in defeat , his body being torn asunder by the Pandava Tornado. Here he again repeated his political tour de force and appointed Jarasandha’s son Sahadeva as the King of Magadha, winning his friendship and creating a powerful Pandava ally close to Karna’s Anga. This friendship resulted in King Sahadeva marrying his sister to the Pandava, Sahadeva and Magadha’s armies fighting on the side of the Pandavas in Kurukshetra.

Krishna was certainly not averse to the employment of force where force was required. When Shishupala’s challenge and taunts became too much to bear, Krishna killed him in front of all the assembled Kshatriyas, against the backdrop of Yudhishthira’s grand Rajasuya sacrifice. This emphatic show of force underlined that the new Dharma-state of Krishna and the Pandavas was not toothless, that Danda was an essential part of their politics and that those who were in positions of power , should have the wisdom to use force where absolutely required.

This also puts Krishna in sharp contrast to Bhishma whose whole life was wasted by meaningless vows and an idiosyncratic, confused understanding of Dharma, frozen in time, characterized by passivity, inaction and wrong action while Hastinapura limped slowly towards Doom. Bhishma is the Epitome of Power unused and thus misused in the Mahabharata. No wonder that Chanakya, the great political thinker of Mauryan times, was greatly inspired by Krishna while composing the principles of his Niti Shastra. Another of Krishna’s key politico-military strategies was taking on one powerful enemy at a time. The sequential killing of Kans, Hansa, Dimvaka, Jarasandha, Paundraka, Shishupal , Shalva, Dantavaktra, Naraka and Ekalavya before the Kurukshetra war is no mere accident.

However it was in the third Pandava, Arjuna that Krishna found a Soul so similar to him that they eventually came to be known as manifestations of the inseparable twin souls Nara and Narayana. Arjuna, the greatest and most versatile warrior of Aryavarta, unconquerable with his great bow Gandiva in hand, noble and pure in thought, speech and conduct, combining the mind of a mighty warrior with the heart of a sensitive artist, who could as effortlessly play the strings of the Veena or produce terrifying war-music with the intimidating twang of the Gandiva. Arjuna, the home of so many virtues and in many ways the “Ideal Man”, fascinated Krishna as much as Krishna fascinated Arjuna and this mutual feeling blossomed into a legendary friendship culminating in the imagery of the “Two Krishnas on one chariot”, an inseparable warrior-pair striking terror into the hearts of enemies and devastating the Kaurava armies on the killing fields of Kurukshetra.

And it’s on this Dharmakshetra Kurukshetra that doubts about duty and life enveloped Arjuna, doubts which arose when he had to finally face an all-consuming and catastrophic Great War, a War which would consume not only his own beloved Chandravansh but the cream of Bharata’s Kshatriya race and which would have devastating effects for the whole country and world order.

These doubts were based on very real and heart wrenching realizations and not born out of mere weakness and sentimentalism. However Krishna rose and reminded him that the Time had come and he could not obstruct the inexorable flow of time and destiny. All he could do was to fulfill his own destiny as a great warrior on the side of Dharma, do his Duty and win glory. 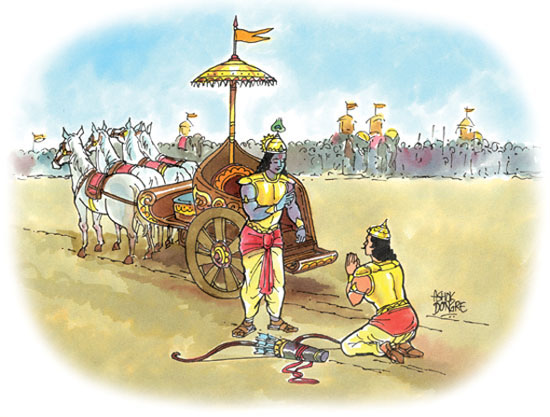 There is no motivational speech greater than the Gita and no speaker can approach the power of Lord Krishna. The following words will fire the soul and destroy the self-delusional weakness of any despairing man or woman.

“From where has this impurity crept into you,
O Arjuna, in the moment of crisis!
This weakness does not befit noble men (Aryans),
destroys fame and does not lead to the heavens”

“Do not be a eunuch O son of Pritha (Kunti),
this is not worthy of you,
Crush this petty weakness of heart and arise,
O scorcher of enemies!”

“Either attain the heavens, being slain in battle
or enjoy the earth, winning the War,
therefore arise O son of Kunti,
be determined to fight!”

Swami Vivekananda believed that these three verses contain in them the gist of the Glorious Gita and reverberate with the mighty spirit of Krishna.

And the dejected, devastated and confused Arjuna stands up at last with firm determination, his great bow clasped firmly in hand and roars,

“My delusion is destroyed,
I have regained my senses and confidence
by Your grace O Infallible One!”

The Gita added another dimension to the multidimensional colorful personality of Krishna. This was the role of the friend-philosopher-guide who brought back his beloved friend from the abyss of self-doubt and eventual destruction and put him back on the path of Duty. The Gita is called Krishna’s Song but it is also, like the Mahabharata of which it is an integral part of, Krishna’s Roar! This Roar echoes down centuries and should inspire the Youth of today’s India to shrug off lethargy and work hard to restore India to its ancient greatness.