Wonder how many times a friend has been your proxy in the classroom in your absence! We had a class of 75 students in graduation. Some of us used to bunk and ask a friend to say ‘Yes Sir’ when our name is called during the attendance. It worked till we were caught. A Dean introduced a system of numbered tokens to be collected at the entrance of the class and dropped in a box-it was later checked to verify the attendance. But it was easy- a friend would collect his and our tokens together…!

Well I am discussing here something totally different. We have an instrumental, scientific and climate record of plus 100 years. Beyond that we have some reliable historical records, but nothing beyond that. Like the tokens for the class attendance, geologists collect proxy evidences from glacial ice/tree rings/fossils etc. to find out how much was the precipitation in the past and gather clues about the past rains and their effects on the landforms, agriculture and society.

In the mountainous terrain cultivation is a challenge. The terraced fields are too small to produce large quantities of grains and over and above, the climate is hostile. Excess or lack of rains mars the agricultural produce. This issue is compounded as merely 10% of agricultural land in the hills is under irrigation, the rest is only rain fed. In other words, land holders of nearly 90% lands are at the mercy of rain Gods. A good rain brings cheers, an excess or no rain brings tears for them. Thus if the mood of the weather could be gauged (predicted), the farmers could be forewarned and their efforts could be saved. For example, this year’s unprecedented rains in Uttarakhand, apart from bringing disaster in terms of landslides and floods also ruined huge tracts of agricultural fields. The entire economy of the area has been jeopardised.

It is well known that the Nature never rests. The nature’s processes leave varieties of tell-tale marks, which help the geologists and paleo-climatologists to decipher the past climates and in turn predict the future climate. Trees as they grow develop annular rings. These rings are formed as a result of new growth of cells near the bark of the tree. One ring usually marks the passage of one year in a tree’s life. The width of the rings represents a rapid or slow growth of the tree, which, in turn indicates a wet or a dry condition respectively. A rainy season with heavy precipitation may lead to wider rings, while a narrow ring would indicate a dry climate. Trees of same area tend to have similar type of rings. Thus help in identifying similar climatic conditions in a region. These can be compared with other regions to ascertain about the variation in rainfall or drought from one area to another. 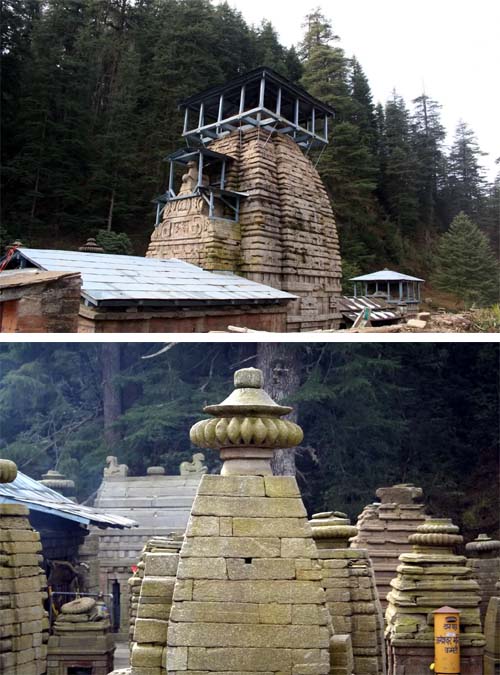 The advent of computers has helped such studies a lot as, it saves lot of time in statistical matching of the rings. The majestic conifers, particularly Cedars of Kumaon are considered ideal for the purpose of tree ring analysis and working out the past climates. It is believed that Cedars were originally planted near sacred groves and temples. For example, Jageshwar, once considered to be the centre of Lakulish Shaivism (Lakulish is 28th Avataar of Lord Shiva) is situated in a dense Cedar forest. These Cedars, the old guards of Jageshwar are perhaps one of the best to work out the climate of the period between 9th and 13th Century-that is the period in which the group of temples at Jageshwar were constructed. It is also believed that Lord Lakulish (Lord Shiva with a wooden stick) originated in Gujarat and travelled to Jageshwar. People say that Gujaratis settled in Jageshwar area which according to Skandpuran is amidst ‘Daruk van’ and has the eighth Jyotirling of Lord Shiva. Daruk means Cedar. This takes the Cedars of Jageshwar to mythological period.

Like Jageshwar, a similar site is Gangolihat-yet another place famous for ancient temples and Cedar forests.

As evident from the caption of this story, tree ring analysis and prediction is a proxy for other records that are not available in an area. Such records need to be crossed checked by comparison with available, authentic records nearby. In case of Jageshwar and Gangolihat fortunately, there is a weather station functioning at Mukteshwar in Nainital district, since 1897.

Using the data available from the tree rings of cedars at Jageshwar and Gangolihat, R.R. Yadav and K.G. Misra of the Birbal Sahni Institute of Paleobotaly, Lucknow and B.S. Kotlia and Neha Upreti of Department of Geology, Kumaon University (In Press: Yadav R.R. et.al., Premonsoon precipitation variability in Kumaon Himalaya, India…Quaternay International- 2013), tried to correlate the climate signals from the tree ring data from September of previous year to September of the current year. The research team found that the Cedars in Jageshwar area could be earlier that the early sixteenth century. The trees of Gangolihat area were dated as younger than the Jageshwar area-indicating that the plantation had first started in Jageshwar and then spread to other regions of Kumaon.

Turning the pages of the weather records of western Nepal, based on the tree ring analysis, the researchers found that there is a downwards trend in the winter rains since 1995. This is not a very encouraging sign, as a dry winter with less than normal precipitation could affect the agriculture of Kumaon hills and also weaken the water resources for the hills and also for the plains.

One has to watch out and refine the predictive skills for rainfall or droughts in the Himalayas. The climate change is certainly affecting the region and water resources are always vulnerable. The best alternative therefore for the region (particularly Kumaon and Garhwal) is to resort to water harvesting and storage. Apart from drinking water, lack of rains certainly affects the crops in 90% of Kumaon Himalayas, which is why such studies and measures are vital.