Science of Pranayam and Homeopathy 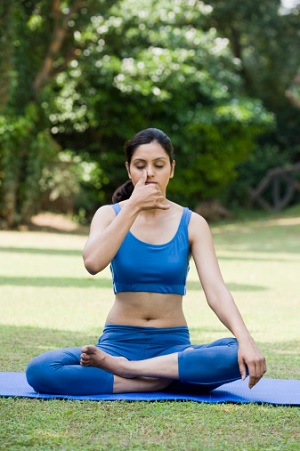 Pranayam means control of Pran or vital force. According to Patanjali it means controlled breathing which includes deep inhaling, exhaling and retention of breath [1]. Pranayam occupies central position in the Indian Yogic system and it is said that liberation of soul is achieved through proper pranayam and meditation.

Modern medical science has shown unequivocally that Pranayam helps in toning the mind and body. Tomes have therefore been written on its beneficial effects on blood pressure and general well being of body and mind [2].

However the exact mechanism of how Pranayam helps in toning the body and mind has still remained a mystery. Recent researches have shown that nanoparticles (particle size of 10-30 nanometers which are almost 10-20 times smaller than those emitted in cigarette smoke) [10], can directly reach the brain through nose breathing and bypass the blood-brain-barrier (BBB). This process may throw some light on how Pranayam affects the mind and body.

Medical researchers discovered for the first time in 1941 that small amounts of fine particles that were inhaled through nose could be lodged in the brain by breaching BBB [3]. However this field of research remained dormant till 1990s when scientists, alarmed by rising environmental pollution, visited the early research and started discovering the harmful affects of toxin invasion of brain through breathing.

Today rapidly growing research shows that a small part of the air we breathe through our nostrils goes directly to the brain via the olfactory lobe and the rest (major portion) goes to the lungs supplying the necessary oxygen to the blood. Thus the inhaling breath affects both the mind and the body directly. Moreover the air we breathe has direct impact on our brain.

Scientists have also found out that breathing through one nostril affects the part of the brain on that side [4], and thus the practice of inhaling through one nostril during Pranayam is to stimulate that side of the brain and not for cleaning the nostril as explained by experts in Pranayam. Similarly deep slow breathing allows enough time for the nanoparticles or Pran to pass through the BBB and into the brain.

This has alarming implications for modern living since the inhaled pollution from household and automobile smoke, dust and general industrial environment has the ability to directly go to the brain and affect the nervous system. Incidences of increased cancer, dementia, Alzheimer’s disease, etc., have been attributed partly to the toxin invasion of the brain caused by pollution. This could also be a possible reason why secondhand smoke is far more dangerous than smoking itself since the exhaled smoke particles go to the brain directly.

It has also been shown by the scientists that though the pollutants are most of the time flushed out of the lungs by the immune system, the toxic particles in the brain go on accumulating [5]. Nevertheless if Pranayam is practiced in clean and open-air environment daily then it can negate the problems of modern life. A possible mechanism is explained below.

It has also been known for quite some time now that antibiotics-resistant bacteria get neutralized with fresh air and plenty of sunlight [6]. Researchers are finding that the enclosed environment of hospitals and offices with air conditioning and artificial air breeds bacteria which create diseases in the people residing in these buildings. Exposing them to plenty of sunlight and fresh air has brought down the incidence of disease drastically. A possible mechanism for this is that UV radiation of sunlight interacts with nanoparticles in air and produces free radicals and these reactive free radicals when inhaled have tremendous therapeutic value.

Thus it is possible that the toxins in the brain can be detoxified by inhaling free radicals. Recently scientists have also found out that good deep sleep helps in flushing out the toxins from the brain [7]. Since deep sleep is like meditation hence detoxification through Pranayam, good sleep and meditation can be a basis of healthy brain.

In the mountains the proportion of UV rays in sunlight is higher than in the plains and with higher altitude and less pollution the creation of free radicals also increases. Thus mountain sojourn has always been recommended for improving health. Probably that could also be a reason why Rishis and Yogis went to mountains for meditation and practicing Yoga.

One of the most important part of breathing is smell. It is perhaps our most memory-evocating sense. The smell signals from the nose go directly to the limbic system - the seat of emotions. Thus smells evoke deep emotional responses and memories.

Studies have also shown that fragrance can change moods and influence judgment [8]. That could possibly be the reason why throughout the ages, humans have always had a love affair with flowers and their fragrance. Beautiful flowers are not only balm to our eyes but their fragrance is food for our soul. No wonder fragrance and perfume is 30-35 billion dollars strong industry today. Use of mood enhancing incense has been used in religious practices in almost all societies through immemorial times.

Thus the clean crisp mountain air with a whiff of pleasant smell from flowers literally evokes the abode of gods since Pranayam in such an environment provides the mechanism for detoxifying and cleaning the brain for better meditation and hence liberation. Even in our daily life, we can do Pranayam in open and clean air.

Scientists are also using Pranayam pathway for developing brain drug delivery systems through the nasal sprays so that it can breach the BBB and go directly to the brain. I believe that is how homeopathic medicines also work.

Generally homeopathic medicines are given in the form of small globules which a patient is supposed to suck. Through sucking of pills a small part of the medicine reaches the brain via the olfactory lobe. This helps the brain to trigger the mechanism by which body releases chemicals to fight the disease. That is why the best way to administer the homeopathic medicines is to spray the liquid directly on the tongue. This allows rapid transfer of the particle mist to the brain via the olfactory lobe. Also homeopathic medicines are supposed to be taken half an hour before or after food consumption so that the food smells do not interfere with the aroma of medicine.

Another interesting aspect of homeopathic medicines is that their potency increases with increasing dilution [9]. There are conflicting reports on why this happens. I feel that increased dilution of medicine allows the BBB to be breached with relative ease resulting in its enhanced effect in the brain.

Thus Pranayam acts like enhanced homeopathy where the free radicals from clean air help detoxify the brain and body for healthy living.