Tales from the Lake Sediments

Landslides are integral part of the Himalayas. In these columns you have read of many devastating landslides that blocked the rivers. In the recent history, the landslide on Birehi Ganga at Gohna is well recorded. On 1893 September an entire spur of the mountain fell across Birehi and blocked the river, leading to a huge lake, locally known as Gohna Tal. In August 1894 part of the 1000 feet high dam broke and the water released submerged quite a bit of area downstream till Haridwar. But the remaining blockade continued till 1971 and the lake remained there.

I must shar with the readers that a lake and a river has different types of sediments. While a river continues to flow over sand, the lake water remains placid over fine clays. A lake is a lake because it holds water still. This is possible because of the fine sediments, that is, clays do not allow water to percolate down. Another character of the clays is that they are plastic in nature, just like the clays you might have used for creating various shapes as a kid!

The plastic nature of the clays makes them change shapes according to pressure on them. A character which comes handy, while studying the clay sediments of a lake. Particularly when they occur as layered deposits of a paleo-lake - a lake that existed in the past.

Earthquakes and our earth have an age-old association. Since the collision of Indian Plate with the Tibetan plate, the former has been continuously pushing under the later. The constant stress thus generated leads to earthquakes. The instrumental records of the earthquake are barely a century old. Information prior to that is based on the historical records. However, for the earthquakes that must have occurred in the pre-history one has to depend upon geological evidences.

Spiti valley is no exception, when it comes to earthquakes. In 1976 while camping on the bank of Lingti River, one night our tent began to shake like a fig leaf while we were asleep. So violent was the shaking that we rushed out of the tent. Large, loose boulders were rolling down the hill slope. One could even decipher a rumbling inside the earth. Being sparsely populated, there were no casualties. Of course, a few mud houses did collapse. This was just to emphasize that like neighboring Kinnaur, Spiti is also earthquake prone.

Over and above what is significant that the records of past earthquakes meticulously preserved in the layers of soft rocks like plastic clay are now being deciphered. Once the jigsaw puzzle is completed such records will help in drawing development plans for the Himalayas in a better way.

The plastic clays of lake deposits are ideal preservers of past tectonic activities. Atargoo is a non-descript place at the confluence of Pin and Spiti rivers in the Spiti Valley, Himachal Pradesh. While looking for marine fossils in Spiti valley in 1976, I used to wonder at the broad valley of the river at this confluence. It is unusually wide valley here. Much later I realized that the U shaped, broad Spiti River Valley is much broader here, and becomes narrow at Atargoo. It was at this narrow neck the River was dammed, by the Spiti fault about 10000 years ago, claims a renowned geologist Dr O.N. Bhargava of Geological Survey of India. This dam must have produced a huge lake-today being referred as Atargoo paleo-lake.

The clay sequence exposed at Atargoo is 37 m thick claim Kotlia and his co-workers. The thickness of the sediments shows that the lake must have been more than 100 feet deep. To produce a lake of this depth one needs a massive landslide. Spiti, being an area of comparatively less rain fall, the only other reason for such a colossal landslide is an earthquake or a series of earthquakes.

Powerful earthquakes can create unbelievable structures. For example the 1819 earthquake of Kutch uplifted the ground by about six meters for a length of 80 km. For its enormity people called it a Bund made by the Allah. That is why the name, Allah Bund. 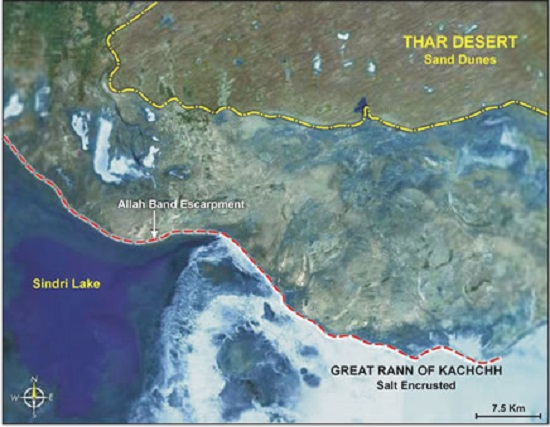 Much later, the seismologists realized that such structures are formed due to liquefaction of sand in the subsurface. Sand is nothing but silica (glass) and it has a property of melting when heated-that is how glass is given different shapes for our use.

Likewise some of the clays have thixotropic properties. They become fluid, when shaken or stirred by any reason and later revert to semisolid state when aloud to stand. Such clays in the event of earthquakes form what the seismologists now term as the seismites. The seismites horizon of Atargoo is bound by rocks which show no deformation. Kotilia and his co-workers claim that liquefaction phenomenon in Atargoo may be linked to active Kaurik-Chango Fault, or even there could be a possibility of several active faults in the area, which might have activated the Spiti fault as well!

Mind you all these evidences are circumstantial, therefore more detailed work is required to find out which events actually triggered the faults to become active. The earthquake event or events that triggered this activism took place in all probability during the past 10000 years.

A history of earthquakes on decadal, centennial and thousand year scale roughly shows that the past events have been more powerful and may be repeated after thousand years. The question remains when it will take place? The planners of the dams and other such large structures in the Himalayas need to read the history of the earthquakes more carefully and also read between the lines. Else the results of their labor could be disastrous.