The climate has become a major issue with the mankind. If you browse across the pages of the earth’s history, you come across several instances of scorching heat, incessant rains, extreme droughts and floods. But fortunately we were not there. Now with the threat of Global Climate change looming large and the climate going almost haywire everywhere, the climatologists are groping for clues about the past climates. Was it as cold as it is now, did it pour, as it does now and was it as dry, as it is now etc. are some of the questions that haunt our experts.

Bahadur Singh Kotlia, Jaishri Sanwal, and Lalit Mohan Joshi of Kumaun University, Nainital; Binita Phartiyal and Lalit Joshi of Birbal Sahni Institute of Paleobotany, Lucknow and Anjali Trivedi and Chhaya Sharma of Lucknow University, found in their research that there existed a lake some 21.5 ka (thousand years) ago. Of course the King and his protégé were nowhere around then. 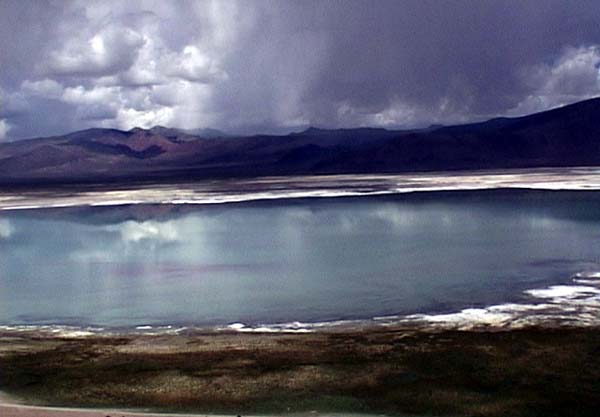 We all know that a lake is a water body surrounded by land on all sides. The Himalayas are not that stoic or stable as they appear to be. In the past ten thousand years there have been many upheavals, some of them may be due to powerful earthquakes. Many times these upheavals or movements caused faults that resulted in movement of one block of mountain. One such movement in Champawat district led to the creation of the lake some 21.5 thousand years ago.

Normally, when water flows in a river there is a constant dynamics, that leads to erosion of rocks and the river carries coarser sediments, depending upon its flow, type of rocks present in the area etc. But once water is impounded the dynamics come to a standstill. In this changed situation, influx of sand is minimal; instead clay begins to get deposited. The type of clay will also depend upon the rock types in the area. In case of Champawat lake, Bahadur and his co-researchers found a five meter thick sequence of mostly black and carbon rich mud left behind by the lake, after it had been drained out. Carbon rich material is supposed to be useful for dating the rocks. Thus the researchers trying to unveil the mysterious pages of the past climate use such material to find out the ages and with the help of other evidences, the climatic conditions. The information collected in bits and snatches is then collated and a picture of the past emerges.

In their research paper Bahadur and his co-workers state that the Phulara paleo lake (past lake) was formed 21500 years before present due to blocking of Girla Gad (a rivulet) by a fault. At the base of the fine sized lake sediments there are coarse gravel and sands mixed with them-indicating turmoil. They further contend that the period from 21500 to 20200 years before present in this region was a period of heavy rains, as seen by the presence of varieties of plants that grow in the lake bed, which produced a black carbon rich mud. Incidentally conifers, are much less in numbers, further confirming a wet phase. Pollens normally found in the plants of wetlands are found here.

Not only this area, but large part of Kumaon and even Tibet show evidences of rains between 21700 to 20000 years. Even far off Africa has yielded evidence for heavy rains around 21500 years before present. In Africa high levels of past lake also have organic debris.

As it happens, the climate never remains steady over a long period of time, as it is influenced by several factors. Based on the study of the sediments from Phulara Lake in Champawat, Bahadur and his co-researchers conclude that the area has been witness to the Last Glacial maxima, Older Dryas-a cold period between warmer phases around 14000 years before present and Younger Dryas-a period of cold climate and drought of some 1300 plus minus 70 years between 12800 and 11500 years Before present and Inter Tropical Convergence Zone also known as the Doldrums in the mariner’s language which causes the Indian Monsoon.

Thus a small thickness of lake sediments in a lake that existed in the past holds clues to several mysteries of the past climate. The erstwhile capital needs more exploration to unravel and fine tune the details of the past climates. The past is always a window of the future-may be the future climate, particularly heavy rains for Uttarakhand can be better predicted and forecast to avoid gruesome tragedies like that of June 2013!

From the Phulara lacustrine sequence, which is mainly composed of finely laminated black and carbonaceous mud, a minor magnetic reversal (20.5 – 19.7 ka BP) is considered as one of the recurrences of the Mono Lake excursion. Although based on the estimation of ages for certain intervals, the results show that the LGM, OD, YD, Holocene warming, 8.2 ka cooling phase and 4.2 ka event were felt in the Kumaun Himalaya. Variation in sensitivity of sites and proxies, reliability of dating techniques and most importantly the coarser sampling intervals with very low resolution data in some parts of the Himalaya may account for the paucity of records of some of these events, especially those with a very short duration. However, the post-glacial events recorded in the Phulara profile are observed throughout Asia and can be correlated with global events. There may be slight variation in commencement and duration of the events, and this can be attributed to the latitude location, response time, temporal resolution and also non-climate factors (e.g., tectonics) which may alter the evolution of the lake system.