Beware of the Himalayan Lakes

Lakes are a center of attraction in any mountainous terrain. The Himalayas being the youngest and highest mountains in the world have a number of lakes that exist today and still a larger number of lakes existed in the past, confirmed by the geological evidences. Many of the lakes are formed due to damming of a stream and they are or were vacated once the dam breached. 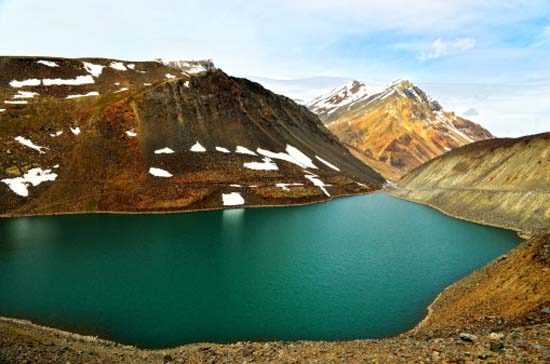 There are two glaring examples, in support of this statement. In 1893 a mountain spur fell over the Birehi Ganga, a tributary of the River Alaknanda in Garhwal. This landslide in the month of September dammed the river and a giant lake was formed. Known as Gohna Lake-this was to be a unique lake in the world-with a life as short as 77 years. Despite poor communication, the British got the wind of it and sent a team of T.H. Holland, a geologist in Geological Survey of India and Lt. Col. Pulford and Lt. Crookshank to study the blockade. Holland made precise mathematical calculations and postulated that the dam would burst in the night between 25th and 26th August 1894. Had it been in the present era, the government and the media would have pooh-poohed the forecast. But the British government took it seriously and gave them a free hand to suggest and implement safety measures. In no time a telegraph line was laid from Gohna to Haridwar and an Assistant Engineer posted at Gohna with strict instructions to holler in case he suspected a breach any time in the dam. In the meanwhile the entire habitation of vulnerable area was removed to safety.

The dam breached, albeit partially on the postulated date. It is a matter of praise and surprise at the working of British administration, that none but a family of five perished in the flash floods caused by the breach. These five perished because they broke the cordon and went back to their house in Srinagar to collect some belongings.

The remnant of Gohna Lake thereafter, became a paradise for the anglers. The British placed boats in the lake, which were a favorite of the adventurous army officers and trekkers in the days of the yore. It may be borne in mind that Birehi valley was densely forested. But the British wanted those trees to make sleepers for their railways in England. Thus there was massive hacking of trees. The trees spared by the British were contracted to the private parties by the pot-Independence forest management of India. The mountain slopes that were held tight by the trees thus became bereft of any control. During monsoon these barren slopes were eroded fast and filled up the lake.

About 20 km downstream of Gohna was a village Belakuchi on road to Badrinath. The village was about 100 feet above the road and the River Alaknanda flowed about 100 feet below the road. On the roadside a market had prospered just beyond the bridge on the Alaknanda. Birehi and Alaknanda confluence was slightly upstream of the bridge. Since the road beyond was narrow, a one way traffic system was in vogue. All the buses and vehicles used to stop at Belakuchi, till the traffic from the opposite side passed. Thus every two hours Belakuchi acted as a gate for journey to or from Badrinath. Since all the buses had to stop a market had sprung at the places. There were a number of tea and pakauri shops. The villagers were prospering because of the ‘gate’.

Then it happened, in 1970. On the ill-fated day, there were nearly 140 buses carrying pilgrims and locals to and from Badrinath. There was a road block between the bridge and Belakuchi Bazar. Hence the entire traffic from both the sides was piled up at Belakuchi. The Bazar was agog with activity. Litres of tea were brewing for the tired pilgrims. Some locals saw the waters of Alaknanda turn brownish red and also noticed that the river was roaring abnormally that day. But it was attributed to heavy rainfall upstream.

People were unaware what was happening in the upstream. The leftover dam at Gohna succumbed to the pressure generated by the accumulated eroded material and the heavy rain. The dam burst and suddenly water gushed out with a mighty roar. By afternoon Alaknanda began to rise menacingly. Once the water began lashing the shops, people became panicky and everyone ran up the hill. They halted at Belakuchi village to look back. Water was still rising. Then they saw the Belakuchi bridge being washed away like matchsticks. To their horror the road, the buses and the shops everything vanished in no time.

People thought they were safe in the village. But they were not. Water was still rising menacingly. There were shouts advising people to run to the top of the ridge. Those who could, they did. Old and infirm and those who couldn’t climb met a watery grave at Belakuchi.

Forty three years is too long a period in human memory. In between there were many mishaps, nature took its revenge from the plundering human society. But they were all conveniently forgotten. In a country of poor like ours, money is more important than the lives. The Uttarakhand Government and the residents thought that the more footfalls of pilgrims and tourists in the region would earn them more revenue to ‘develop’. Hence Kedarnath became a township.

I need not repeat, what happened at Kedarnath. It is understood that Chorabari Tal or Gandhi Sarovar, a lake that was formed due to damming of the stream by glacial moraine some 6000 years ago, could not be contained by the fragile dam. Later studies have revealed that there was a heavy snowfall in the higher reaches of Kedarnath from 28th May onwards. Satellite pictures prove it well. Heavy snow combined with heavy downpour becomes a deadly combination. The nature had given enough warnings but the authorities remained indifferent either due to ignorance or they did not want to panic people. The warnings were in the form of several landslides in the region. In a distance of 20 km along Mandakini from Kedarnath more than 192 landslides had occurred in a span of three days from 15th June 2013.

It may be noted here that normally Kedarnath is swampy like a water world. Special engineering techniques are used for construction in such terrain. Alas the robust looking, RCC structures proved puny for the nature!

How many died and what was the extent of the loss, frankly speaking is a matter of conjecture and wild guess only. The government obviously quotes a lower figure to avoid a bad name and those who suffer always give bloated figures. But now it is history, so no point discussing the numbers. What is important is to understand that had the government controlled and managed the influx of the pilgrims, the number of dead could have been reduced. In case of Gohna blockade, due to alertness of the British government only five people died in August 1894.

It is not that such lakes are a recent phenomenon. In the geological past too such lakes were formed and at some or stage left behind a trail of destruction. Fortunately those days human beings were not around. Bahadur Singh Kotlia and Lalit Mohan Joshi of Kumaon University, Nainital, in a paper published in Zeitschrift fur Geomorphologie Vol. 57, 3(2013) have described on such lake formed near the lower reaches of the Milam Glacier in Munsiyari Tehsil of Pithoragarh district, Uttarakhand.

Around 23000 years ago due to a sudden movement within the Trans Himadri Fault the path of the melt waters from the glacier was blocked. Consequently a lake was formed. Bahadur and his co-worker trekked to the spot and carried out intensive surveys. They found 25.6 metres thick clay and sand deposit, typical of a lake deposit. This lake breached around 11000 years ago says Bahadur due to a further movement in the Fault. He further says that a number of lakes were either formed or disappeared around 21000 years before present in the Himalayas. This lake Burfu near Milam Glacier could be identified by the pile of sediments it left and the events could be dated as a host of fossil pollen and spores were recovered from the sediments.

Academics apart, a significant feature of the find is the thickness of the pile of lake sediments. It is possible that the lake when formed was around 50 metres in depth. Later when the lake broke through the dam water level in Gori River must have risen high! Fortunately, there were no human habitations in its passage. As the stories of many such lakes are coming out, it is time that the Uttarakhand government takes a stock of all such areas where habitation is dense close to a lake and takes adequate precautions for the safety of the inhabitants.