Deoriatal is nowadays a very popular destination in Garhwal Himalayas.

Deoriatal in Rudraprayag district of Uttarakhand in the Kedarnath Musk Deer Sanctuary at an altitude of 2387 meters is one of the beauty-spots of Garhwal Himalayas. I have been there thrice – the first visit in 1995 and the last in 2008 – and thus, I have been witness to the transformation that this place and its surroundings have undergone.

How does it like when wild beauty is tamed or domesticated?

‘Tal’ means lake (or a large water body), and ‘Deoria’ arguably comes from “Deor” tree. Another supposed origin of the word is “Deva” – God.

The legend goes that the Devas bathed in this lake. Some believe that this lake is the "Indra Sarovar" of Puranik fame. It is also believed to be the site of the Yudhishthira-Yaksha Samvada of Mahabharata.

Owing to its mythical background, Garhwalis believe that the place has magical charms. I heard from locals that strange sounds can be heard at night if one passes the night there – a fact that trekkers who spend the night there in tents may or may not agree with.

The place offers a 300° panorama – and standing before the Lake one can see Mountains like Chaukhamba, Nilkantha, Bandarpunch, Yellow Tooth, Kedar Range, Kalanag, etc.

The main attraction is the close view of mighty Chaukhamba peak and the snow-capped mountain ranges almost as far as the eye stretches from east to west, the distant valleys, and the lush green Bugiyal of Deoriatal amidst dense forest of deodar and rhododrendon.

The most spectacular view is the upside reflection of Chaukhamba and the ranges in Deoriatal.

For bird lovers, another rewarding experience is a stroll round the lake and a trek into the forest.

Write ups on Deoriatal often describe the Lake as “emerald lake” and the Lake water as “crystal clear water.” Perhaps it was so once upon a time. Locals told me that once people would drink the Lake water – a feat, it is not wise to attempt now because it might turn out to be a tadpole health-drink.

In all my three visits, I found the Lake as described from a distance, but the myth vanished once I stepped closer. It is full of tadpoles and dirt – though, the present forest department is trying to keep the place free of pollution.

This is however, a minor fact, because no trekker would go there to drink water. The reflection of Chaukhamba is breathtaking – however, without that reflection, that is, in a cloudy weather, the Lake is as dumb as any other pond. The surrounding forest is then all that is left for exploration.

In 1995 there was no hotel in Sari village. The branch road to Sari from the main road (Bhukh Hartal Road) was then ‘Kacca’ – and one had to trek almost 2 km from the main road to the village, or from Mastura village to Sari village. There was no hotel in the village, and night accommodation had to be negotiated with village people.

We were four – my cousin brother Abhijit, my brother Ujjal, and friend Arnab. We trekked all the way to the village from the main road junction after a truck dropped us there. We got the chance-truck from Chopta, the beauty-spot of Garhwal, and the door to Tunganath, one of the Five Kedars.

Reaching Sari after a nice trek along a shady path in the light of setting sun, we approached the post office. The post master had a shop, so he was available even then.

On our request, the cordial post master provided us with a room that was beneath the post office – and rather hanging. The room was actually a sort of godown with various dumped storages, and giant spiders sprawling on the wall. Yet, with all the spirit of adventure we enjoyed the stay.

The trek to Deoriatal had all its adventure. The forest was denser; the path was strewn with boulders and dust. We had to carry water because no water was available enroute.

In 2002 the Himalayan luck did not favour me, though I got her favour in other parts of that tour. When we reached Deoriatal early morning, the sky was overcast with clouds, and Chaukhamba and the ranges were completely hidden.

In 2008, I along with my friends Partha and Arjuna went to Bagini-Nandikund trek, and when we had some spare time after that successful trek, we decided to go to Tunganath and Deoriatal for enjoying the pension of a jubilant mood.

Now, there were many hotels in Sari village. The wild beauty has been replaced by semi-urban beauty.

We stayed in the house of one Mr. Negi in a room that he gives in rent to guests.

Mr. Negi is a trained mountaineer and nowadays guide trekkers.

Next morning, when the sky was still dark, we started for Deoriatal. The path was now well constructed. There were lesser trees. It was more the atmosphere of tour than trek.

When we reached Deoriatal after a 2 km trek, the sky was just lightening up and Chaukhamba was yet to rise from sleep.

What saddened me is the lack of aesthetic sense and even environmental consciousness among the people who are authorized to look after Deoriatal.

A concrete circular seat has been built on a high point of the Bugiyal. Perhaps the authorities thought that tourists would enjoy the view of mountain ranges sitting on concrete. What a sorry thought! They don’t realize that a touch of artificial concrete spoils the charm of wild beauty – and that true nature lovers enjoy the beauty of the wild sitting on the green grass of the Bugiyal.

Another eye sore is the ‘Chotti’ allowed to be constructed on the other side of the lake – as it spoils the very view of the reflection. (See picture- below).

Aren’t the authorities’ idiots as not to know what attracts trekkers to Deoriatal? 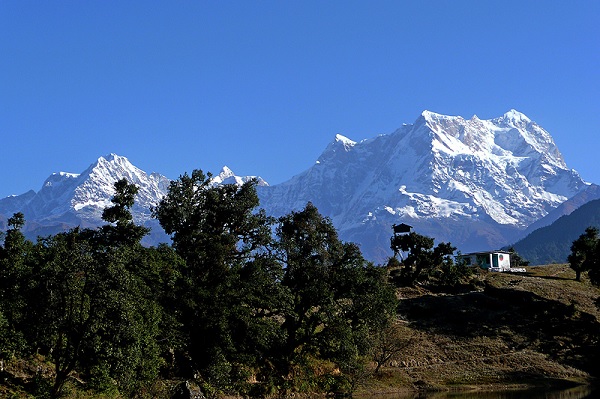 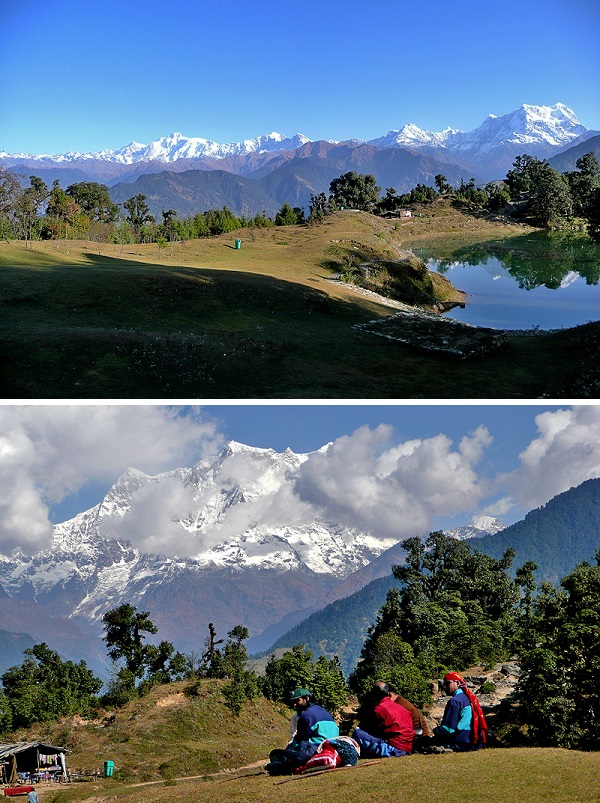 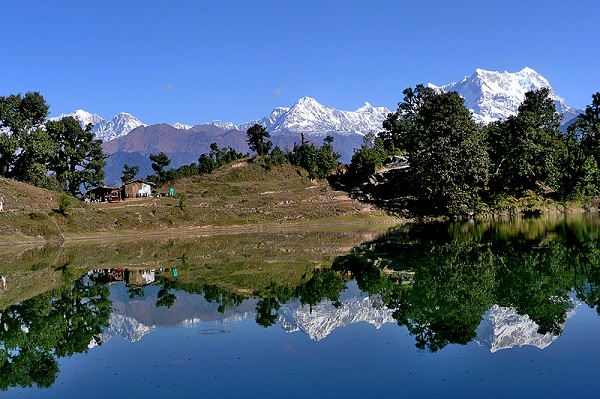 &nbspDeoriatal in 2008 (Note the eyesore ‘chati’ and the idiotic litterbin)

Nowadays there are many hotels in Sari. I would suggest, search for a local people willing to have a paying guest.
There is camping facility at Deoriatal. Instead of staying at Sari, you may go straight to Deoriatal and spend the night there. With mobile phone everywhere, it would not be a problem to be informed beforehand whether camp would be available there.

It depends on how much lavish you want to be.
Normally, it would not be more than Rs. 500/- per head per day.