Remember the gruesome tragedy of last June! For all the pilgrims it was an anger of the God and the perished during their pilgrimage to Kedarnath. Had we been a little alert and paid attention to the reports of the geologists and paid heed to the weatherman, the situation would not have been so ugly. But in our greed we threw caution to the winds and overpopulated the precarious and fragile valley.

The result of the disaster is known to everyone. But it is still a matter of conjecture, how many exactly perished, because no one knows actually how many pilgrims/tourists/locals were there on the fatal day!

Likewise there are many places in the country about which warnings of natural hazards are frequently issued, but we prefer to remain blissfully ignorant. Lucknow, the capital of Uttar Pradesh in India for that matter, is an upcoming metro facing the threats of floods and ground subsidence both. 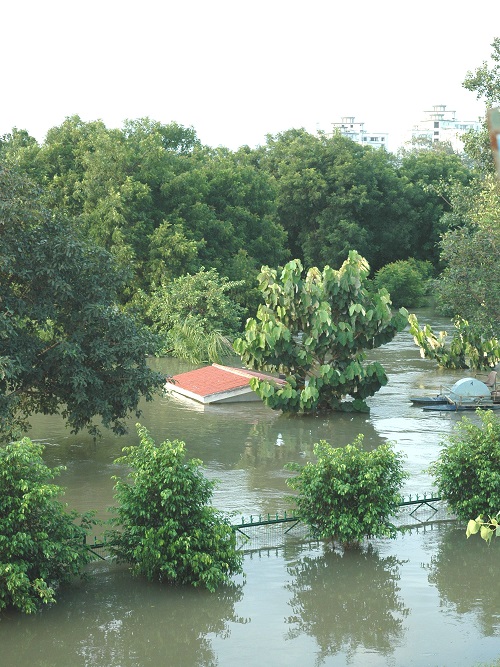 It has been a global tradition since times immemorial that habitats come up on the banks of water bodies like rivers, lakes and of course the sea coasts. Lucknow too when it was declared as the seat of Mughal power in the late 16th century, they moved from Faizabad to Lucknow. Nawabs decided to settle on the highest terrace of the Gomti River. They were neither environment engineers, nor geologists, but common sense told them that this was the place safest from floods.

Gradually, their numbers swell and they needed to spread more. Hence they came down to the next terrace and maintained that level for developing their houses and bazars for years to come. In the meanwhile, the British control on the Nawabs had increased and they loved the banks of Gomti. It perhaps reminded them of their Thames. Claude Martin, the builder had built a house for himself on the banks of Gomti-Chattarmanjil, later rechristened as Kothi Farhat Baksh by the Nawab.

The need for land suddenly increased many times soon after the Independence. And many Taluqdars of Awadh built their huge palatial bungalows on the right bank of Gomti River, almost touching the bank. From here started the practice of occupying the valley of the River with presumption that the Gomti will continue to flow by command of the people.

What they forgot and even now continue to forget that this river has on an average two types of floods. The first type is on a decadal scale and almost every ten years it floods. The other is on a centennial scale and every hundred years there are massive floods. The floods of 1971 were a repeat of the floods of 1870. The entire population on the river banks was literally ‘mauled’ by the river.

The engineers, on the orders of the Government hurriedly build a bund all along on both banks of the river. Presuming that the River will be tamed! The River Gomti has a peculiar character; it is usually a calm and quiet river, with a sluggish flow. But during the monsoon the discharge increases by 100%. More discharge means it brings more sediment in its wake. Under normal circumstances a river spreads the alluvium brought during the monsoon on its flood plain. This has been happening since the river came in to being. Alas, within the precincts of the town the river has been denied this opportunity. It has a limit and beyond that, it cannot carry its load and the river moves on, leaving the extra load on the river bed.

The river bed keeps rising and the heights of the bunds have to be increased every few years. How long this can continue is any body’s guess. Secondly, the river in its full might considers these bunds as puny and it just finds a weak spot to create havoc.

Prof I.B. Singh, a renowned expert on the river alluvium, particularly Ganges Alluvium says things are not as quiet, under the surface as they appear on the surface. During the past 10000 years this region has experienced neo-tectonic movement leading to several lineaments or weak planes in the subsurface. The River Gomti has occupied many such lineaments and that is why it takes such sharp turns all along. A river flowing south-westwards, suddenly takes a sharp northerly bend and after flowing for sometimes in north-west, decides to follow the south-west course. All along the left bank of the Gomti is higher than the right bank, says Prof Singh, which proves his contention of lineaments underneath.

Now imagine a table, which has a crack on the top. Load it with books, beyond a limit, it would give way, first along the crack. Likewise, the cracks occupied by the Gomti are over loaded with sediments-rest I need not elaborate.

A river has its own hydraulic gradient and as the river ages, the hydraulics mature. However, this is possible only as long as the human interference is not there. Apart from the bunds, we have built several bridges across Gomti and a few more are expected to come up. These bridges do hinder the hydraulics of the river, forcing it to off load the sediments more frequently.

Gomti has been surviving on a give and take of water from the aquifers. It is not a snow fed river. But its connection with ground water is pretty intricate. There are sectors in Lucknow where Gomti takes water from the aquifers. In these sectors due to dense population and lack of control, the number of tube-wells is high. Consequently, the sand which holds water in its pores is getting dry. The column of sand in the subsurface maintains a particular shape, as it is held in place by a film of water. Once that water is removed, the chances of the sand column sinking suddenly become very high. Imagine if it happens in a densely populated, newly developed urban cluster like Gomti Nagar of Lucknow!

Therefore, the need of the hour is that while developing a metro like Lucknow, all ground realities should be studied and evaluated, then only clearance given for construction activity.

Alas, this happens in theory only. The urbanization is controlled by agencies for which the land is money. Hence they do not care if the land floods or sinks-they care for their money only.

The agencies that developed Kedarnath too cared for money only and the outcome is terrible. We waited there for the disaster to happen. At several other places, including the example I gave of Lucknow, a disaster will be too eager to happen!