Will ‘Great Dying’ be Repeated?

All eyes are towards Berlin, where the Intergovernmental panel on climate change is meeting from 7th to 11th April, 2014. There are apparently two groups amongst the scientists one believing that all this hullaballoo about the climate change is humbug and it has nothing to with human intervention. Whereas the other is confident that it is the doing of 1851 industrial revolution, which has augmented the greenhouse gases (GHGs) in the atmosphere to an extent that the climate change has set it. There are fence sitters like me, who believe that climate change is inevitable, but yes we have accelerated its pace, by pumping the atmosphere with GHGs, overpopulating the planet to an extent that food shortages in the future may become order of the day, mismanaging the water resources to an extent that in future drinking water may cost more than petrol. 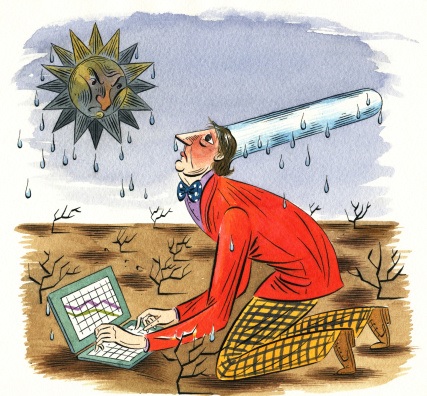 One thing is clear, the Nature is silently, doing its job and keeps sending us reminders and warnings, but we remain blissfully aloof and ignorant. Mind you this is not the first time in the history of the Earth that the nature has started to become haywire. It has happened at least five if not seven times in the past too, but fortunately we were not evolved then. However, life on the Earth was in full swing otherwise. The wrath of the Nature is such that it doesn’t kill in thousands or millions, when it goes on a killing spree, it completely annihilates live forms.

While trying to develop a geological history of a small portion of the sequence of rocks in Spiti in 1976, I had stumbled upon a startling evidence of the nature’s wrath. The sequence of rocks were exploring layer by layer is termed as the Permo-Triassic Boundary. It is known to the geologists, that 252 million years ago at the end of the Permian Era of the Earth’s history there was a mass extinction of life. Thus, while minutely examining a cross section of the rocks of Permian, I noticed that certain marine fossils were gradually shortening in size, till they became a miniscule near the topmost layer. I wondered what must have happened to these prolific marine organisms termed brachiopods! A plausible explanation that came to my mind at that time was that they were probably starved and over a period of time their growth became stunted. But, alas after a particular layer of rock they just vanished. It was frightening thought, but it was a reality-they had vanished.

The latest report released by the IPCC for their forthcoming meet coming Monday, is again frightening. The species of brachiopods that vanished at that time were a part of the 90% of the marine organisms that could not withstand the climate change and perished along with about 70% of the land dwelling organisms. That is why, the event at the boundary of the Permian and Triassic eras is often known as the Great Dying.

The explanation given by the scientists for the great dying is that it must have started with an environmental change, later multiple bolide impacts, increased volcanisms and sudden release of methane gas by methane producing microbes. Fortunately, factories, cars, polluted rivers, polluted food, pesticides; insecticides etc. along with insect like mass of humanity were not there to face the brunt.

There was a time on this earth, when the seas were abundant with Trilobites, a marine group of relatives of modern insects. Such was the wrath of the Nature that by the end of the Permian chapter of the Earth’s history just vanished. Mind you they had ruled the oceans for 270 million years-compared to them the human ancestry is insignificant. But yes, the trilobites did not the cunning brains to construct giant behemoths on eco-fragile grounds like Kedarnath. The climate change due to natural reasons was such that they could get neither oxygen to breathe, nor food to eat. Mass deaths were inevitable.

That was the past. By the time these words are being typed our Earth has witnessed five major extinctions. Of course some claim that there were seven. It is not the number of extinction that matters now. It is important to understand the intricacies of the present crisis and its fall out on us-especially a nation on the brink of development.

Climate change can affect agricultural production, inter-state tensions might be raised over natural resources-particularly water and there can always be a drop in GDP. We should be ready to face more Phailin like cyclones and rising sea levels. As a geologist I know that in the past 55 million years the sea level has fluctuated by 100 meter-but I reiterate we were not there then. Now we have some of the best developed industrial hubs along the western coast.

It may be added here that the coastal populations of Gujarat and Tamilnadu have faced the brunt of the rising or falling sea levels in the past 15000 years. The ruins of exquisitely beautiful temples, sea ports bear testimony to the nature’s ire. Similarly, the ruins of Indus Valley Civilization bear ample testimony to natures anger-how cruel it can be-to have compelled the race of intelligent human being either perish or settle elsewhere.

Sea coasts getting submerged means mass exodus. Our neighbor Bangladesh is predicted to be in the gravest danger of submergence. We have faced exodus from Bangladesh in the past. But this time it could be enormous to gobble up our own economy and existence! The hinterland of our country is already stressed. There is acute shortage of land and water. Our leaders and policy makers are showing more interest in concretizing the agricultural lands by allowing colonization. Concrete doesn’t bear fruits, vegetables or crops. It only lowers the food production.

Small countries like Nepal, Ethiopia and Bangladesh have braced themselves to face the challenge of the nature. It was news to know that Bangladesh has spent $10million to adapt to climatic extremes.

Our country has faced human extremism and even now facing it in some or other form. But now a new brand of terrorist is evolving-that the Nature’s Terror. None of the political party contesting the elections seems to be aware of it. All have promised us heaven on this land-provided the land remains intact!

The Great Dying took millions of years to happen. But in our country, if steps are not taken now millions may die.

It is time that the governments begin to give a serious thought to land, air and water before the things slip out of hands.