Himalayas, a Potential Source of Sustenance 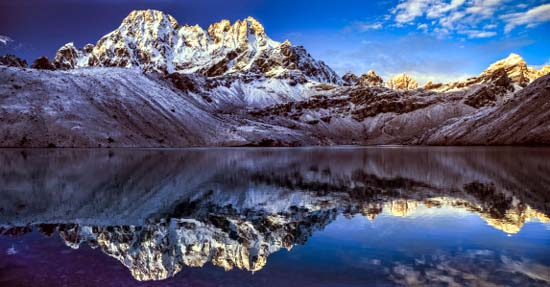 The Himalayas, world’s youngest and highest mountain chain runs from west-northwest to east-southeast, in an arc 2400 km long. The snow clad mountain ranges, with running perennial rivers, huge lakes and dense forests are a potential source of survival for approximately 1.8 billion people of eight countries. People of not only the mountains, but those living in the plains below also survive on the resources provided by the Himalayas.

The beauty of the nature is such, that it provides all the resources free of cost. But alas, we have recklessly pillaged the Himalayas. We always tried to take from the nature and never pay back in return. Consequently, the Himalayan eco-system today is endangered. We have seen the gruesome tragedy of Kedarnath in June 2013. All due to our greed, we built roads by recklessly tearing through the mountain slopes, making them vulnerable for landslides; we constructed hotels, dharamshalas, and innumerable houses in the fragile terrain of Kedarnath. We threw all norms of safety to winds and occupied every square inch of the marshy land, that is Kedarnath. It must be remembered that a marshy land requires special skills for any construction, but no specialists were ever consulted there. It was thought that buildings on RCC pillars on this land will be safe. But they were the first to perish!

One of the richest resources that the Himalayas are endowed with is the forests. An area of 207937 square kilometres is covered by the forests. A study carried out by Chandra Prakash Kuniyal of Herbal Research and Development Institute, Chamoli, Uttarakhand says that the value of forests in terms of carbon sequestration is estimated to be Rs. 943 billion/year. This figure could have been multiple times higher, but during the British regime and also in the post- Independence the area of forest cover has been reduced due to indiscriminate hacking and also for urbanisation, road construction and laying of high power transmission lines.

Himalayas are not as sturdy as they appear. Due to tremendous stress underneath due to the constantly pushing Indian Plate, the region is prone to earthquakes. Since water erosion is maximum in the Himalayas the mountain slopes are prone to landslides, often block the rivers with the debris. The lakes thus formed, have burst many times causing flash floods and great misery in downstream. The forests too are prone to forest fires, which affect the entire biodiversity of the area engulfed by the fire.

These days everybody wants road connectivity. Road construction is a major headache for the human settlements, as the construction activity disturbs the slopes and results in landslides. During monsoon, the lack of proper drainage also leads to landslides and the connectivity is paralysed. On the other hand, as long as the roads are through the movement of heavy traffic causes tremors like micro-earthquakes. These tremors are bad for the health of the mountain slopes. But roads are essential for development. The answer lies in properly engineered roads that can last longer and bear the brunt of the traffic. In this direction the Kalka-Shimla rail-road laid by the British is commendable. This rail link has been operational since November 1903 and till date it has never been disturbed by a major landslide. The secret lies in the exhaustive drainage network laid by the engineers of the yore. If similar care is taken in road construction the roads will become an asset.

The Himalayas are a potent source of water for the plains below, but the Himalayan habitats are combating against water scarcity. The reason is that the natural sources like springs have been clogged due to indiscriminate civil construction and lack of proper planning before allowing the cities to expand. For example, Almora, a historical town in Uttarakhand had 120 flowing springs, all round the ridge on which the town is located. Alas, the value of those springs was never understood by the local government agencies. While approving the maps of houses to be constructed, the government agencies never bothered as to where the muck will be disposed of. Thus, the paths of most of the springs were clogged. In case path of the near subsurface flow of water is obstructed, water soon finds its own outlet and changes location. For example, at Almora the springs on the eastern face of the hill now drain on road towards Chitai Temple.

While taking up projects to provide drinking water to urban areas of the hills, the future requirement was perhaps based on incorrect estimates! Therefore, detailed studies are required to be carried out about the available water resources and population and how the future shortfalls would be covered. Most of the schemes in Uttarakhand are apparently based on adhoc estimates.

Pilgrimage areas need to be regulated-so that more than a fixed number of pilgrims are not allowed to visit the shrine. At many places it has been successfully regulated, like the Amarnath Yatra or Vaishno Devi Yatra. Unfortunately there has been no such system for Kedarnath and Badrinath or for that matter Hem Kund Saheb or Gangotri.

The urban centres of the Himalayas need a well thought of plan for solid waste disposal. At many places even today, the faecal matter is just dumped down the slopes. This is hazardous and it can have widespread consequences.

Most of the urban centres are running short of space. As a result the development authorities shut their eyes when someone constructs a house dangerously close to the slopes or astride a nala on RCC pillars. These nalas carry all the lose material of the mountain slope during monsoon. They are so powerful that any obstruction on their path can be wiped out within seconds. Thus safety norms in construction of houses must never be overlooked.

If the resources of the Himalayas are properly tapped and the areas developed in harmony with nature, the region could emerge as one of the most powerful economies of the world. However, for that kind of development the eight nations will have to come together to draw plans. Due to geopolitical reasons, this kind of planning may not be feasible. But at least India could draw and implement better plans to use and conserve the Himalayan resources and set an example for other Himalayan countries to imbibe.