The Myth of Uttam-Suchitra Mystique: A Re-Vision 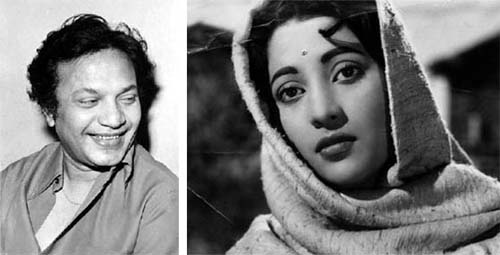 The fifties and sixties of the past century constitute la belle époque of Bengali romantic film presided over by the legendary matinee idol pair of Suchitra Sen (aka Roma Dasgupta, 1931-2014) and Uttam Kumar (aka Arunkumar Chattopadhyay, 1926-80).  The predominance and popularity of this dynamic duo owed as much to their unquestionable good looks and histrionic talent as to the role model they provided via their portrayal of ideal Indian (especially Bengali) man and woman: a sexually innocent virgin male, upright, patriarchal, and excessively idealistic and a nurturing, compassionate, tolerant mother figure, whose femininity finds its fulfillment in being wife, mother, or mentor to a heroic young man.  In other words, Sen popularized the quintessential Hindu womanhood by portraying female character predicated on pugnacious morals, sacrifice, and abnegation, while Chattopadhyay highlighted the image of an ascetic Adonis — disciplined, moral, but potentially an erotic alpha male like Lord Shiva of mythology.

Suchitra Sen has a rightful claim to the Hollywood director Billy Wilder’s (1906-2002) tribute to the late Audrey Hepburn (1929-93), the pretty prodigy of Roman Holiday (1953), that “God kissed on her cheek and there she was.” Interestingly enough, the film Sade Chuattor of 1953 also launched Sen’s triumphant career for the subsequent decades.  Suchitra undoubtedly was the heartthrob of millions of cinegoers in the halcyon days of her professional life.  Consequently, as is usual in India, especially in Bengal, she has been the subject of a mammoth mythopoesis in scores of biographies — most powerfully in Suchitrar Katha (1992), by the journalist Gopalkrishna Ray, that has added to the idealized, even surreal, image of  this femina perennis from Pabna, Eastern Bengal (now Bangladesh).  Shoma Chatterji’s elegant but extravagantly crafted story of her life adds another jewel on the crown that Ms Sen wears, even posthumously, along with the syrupy and silly encomia for her “ethereal,” “incandescent” beauty, regal personality, compassionate heart, and above all, her mystifying spirituality. Underneath the plethora of platitude and panegyric, the real Roma lies hidden — much like a heavily veiled child bride of rural Bengal.

Suchitra Sen’s debut in the Calcutta filmdom must be assessed against the socio-cultural milieu of post-independent India.  The explosion of immigants and refugees from the then East Pakistan, the so-called homeless or bastuharas, had impacted the society of the metropolitan bhadraalok, while despite some superficial honeymooning with westernization the middle-class morality of Bengal still clang adamantly to the repressive norms of traditional patriarchy.  Consequently, the ideal of womanhood continued to be predicated on patriarchal prescription for restraint, sacrifice, and abnegation on the part of a woman.  Thanks to her directors such as Agradut (Bibhuti Laha et al.), Ajoy Kar, or Nirmal Dey, to name a few, the template of Suchitra’s ideal middle-class woman image was constructed by the movie that brought her to limelight, Agnipariksa (1954).  This film was based on a typical crypto misogynist story that privileged the husband as the one who, like Ram of the Ramayan, tested his long lost wife in the crucible of multiple tribulations. Thus was launched the film persona of Suchitra Sen and it would be duplicated, mutatis mutandis, in subsequent films.  Even while enacting the role of Santvana in Ekti Raat (1956), an innocent flirt and a former associate of the hero Sushobhan, forced by the exigencies of circumstances to spend a night in a village inn together, she freely subjects him to quasi-amorous antics but remonstrates at Sushovan’s suggestion to share the only bed in the room by proclaiming proudly and loudly that she could never commit such a transgression of the morals of “eta odesh noi, eta Bangla desh.”  It is noteworthy that in almost all her movies Suchitra has preferred the role of a sexually inhibited sanctimonious female.

Uttam Kumar’s appeal in his prime years had to do with the image of an ideal bhadralok of urban Bengal of his days.  In all his films, as a hero he projected — no doubt this was not his making but of the story and script writers and directors — the archetypal male who combined an ascetic indifference to female lure with a childlike dependence on the heroine (in most cases, especially in the 1950s and 1960s, it was Suchitra Sen).  Uttam’s romantic appeal in Agnipariksa (1954), Shapmochan (1955), Sagarika (1956), Pathe Hoho Deri (1957), Harano Sur (1957), Rajlaksmi O Shrikanta (1958), Chawoa Paowa (1959), Saptapadi (1961), Bipasha (1962), Grihadaha (1967), Har Mana Har (1971), Nabarag (1971), Alo Amar Alo (1972), and Priya Bandhabi (1975) provides a stereotyped portrayal of a puritanical virgin male (with the exception of Alo Amar Alo), attractive but sexually inhibited, in other words, a harmless Bengali Hindu Adam. Such a character needs to be cared for, nursed into health during illness, and slowly but submissively brought into his lover’s attention.  Suchitra Sen, with her profoundly moving expression, flawless beauty, and unparalleled magnificent smile contributed to the magic mix of a romantic pair that rocked postcolonial Bengal in particular and India in general.

In the Suchitra-Uttam repertoire the leitmotif of interaction between the hero and the heroine is what I call “romance on a teapot,” tea functioning as the erotic fluid made sweeter by the generous offers emanating from the latter:  “would you like little more sugar?” or “is the sugar adequate?” Another oft-repeated drama with diegesis is shown through their encounter in the hero’s bedroom trespassed by the heroine at dead of night and the former’s righteous rage or shock at her “untoward” and untimely presence.  It is probably Pramathesh Barua’s (1903-51) Debdas (1936) that first included a shot in the film describing the effeminate Calcutta educated Bengali babu’s pathetic virility anxiety when his childhood companion Parbati came to his room at night to surrender herself to the man she had fallen in love with.  His response to her overture was that of an embarrassed and impotent male; he struck her forehead with a fishing rod drawing blood, thus symbolically wedding her by marking her with sindur.