The Sun Behind The Sun 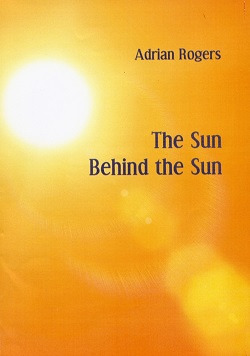 This latest volume of poetry by Adrian Rogers is in one word - brilliant. Indeed like the title suggests, it will shine its way into your heart and illuminate your mind. This book restores my faith in the importance, necessity and importance of quality poetry, even in this age of digital determinism with its fast-fix-texting-socialisation and instant answers.

This book without doubt confirms Rogers' as a master poet. Highly skilled in the use of metaphor; potent colourful imagery; iteration; and subtle, partially hidden meaning; all infused with a delightful sprinkling of magic. One of Rogers' especially effective poetic devices is his construction and use of compound adjectives and compound verbs, these add power and impact to the quite often ordinary day-to-day events he writes about. As an example; like thread-thin incense smoke, and leaf-stripped shadow trees (p. 25)

The book runs to seventy pages and is divided into twelve sections, each of four or five poems, then ends with an Epilogue - the title poem. The back-cover note suggests that after you read the last poem, and decode it, you will have an answer? This little inbuilt mystery highlights a theme running through this collection which is not immediately obvious - one of deep arcane secrets, referencing such occult matters as Tarot card meanings, mystical symbols and spiritual insights. Rogers' includes these words and phrases in a most understated way - The Void; Cosmic Egg; The Wheel; Prince and Beggar; The Hermit; and Agni appear innocuously in poems such as Encounter – A Street Dream (p. 37) The second stanza: [Hint: The Wheel, and Prince and Beggar refer to the Buddhist Wheel of Dhamma]

Careful reading will repay the reader with glistening jewels of wisdom and a deeper feeling for the importance of arcane knowledge. Even the seemingly arbitrary division of the book into twelve sections aroused my suspicion – twelve is a significant number in most occult and spiritual traditions. The last few lines of Sonic Track In Time (p. 23)

This somewhat covert theme is dominated by four other more obvious themes running through the book – journeys; the nature of time; the four seasons and the question of what is real and what is illusory? Rogers is an astute observer of nature, I especially enjoy his poems concerning the sea and that strangely enigmatic tidal zone between the fluid, ethereal ocean and the solid fixed material earth. A few lines from: What Was and Is... (p. 24)

The mystery and profound influence of time is never far from Rogers' mind, he wrestles with this perplexing phenomenon in many of his poems such as in Time Stopped (p.43) The first verse:

The Sun Behind The Sun is far more than a pleasing collection of nature and personal observation poems, and far more enigmatic than one poem in the Epilogue. I suggest at least half the poems need careful reading to yield their full meanings. The ancient Alchemists, to which Rogers occasionally refers, wrote their texts in the form of allegorical stories to hide the secrets of their knowledge. Rogers hasn't deliberately written his poems in this way?, but nevertheless many of his beautifully crafted poems contain such secrets.

I have one minor, though not trivial criticism of this publication, and that is the lack of information about Adrian Rogers! There is no Introduction which the book would have benefited from immensely, but more importantly, there is no biography, photo nor information about this poet at all. Readers like to know a little about the poet, their background and previous publications (heavens, they may even want to read and buy copies?) The book is only available from the publisher's website, not through any major online booksellers - people cannot buy the book if they do not know it exists! In the poem, The Shell (p. 67) which is about a sea shell found on the beach, it's inhabitant long since gone, Rogers ponders the nature of destiny, the last verse:

Sun squinting
I wonder what happened to its owner
will our destinies
go similarly unrecorded?

This rhetorical question is of immense importance to poets and artists in this culturally challenged country, Australia! The overall treatment and acceptance of poets in Australia is nothing less than disgusting, one or two accidentally fall in the spotlight, the rest are persona non grata. Poets of the calibre of Adrian Rogers should be acknowledged as living Australian treasures and honoured accordingly, as they are in many other cultures. The majority of our publishers our generally only interested in sensational, best seller rubbish and are doing nothing to help this situation at all.

This book is one that all lovers of good poetry should add to their libraries, it will become dog-eared from the pleasure of constant reading and re-reading.