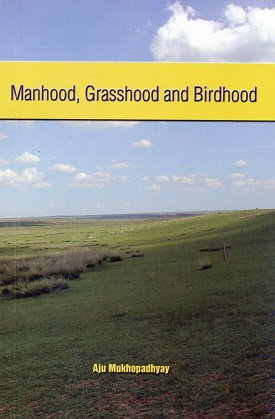 Aju Mukhopadhyay is an astute observer of the way those in power and control (bankers, developers and politicians) influence the natural world, generally to its detriment. He is also a very keen observer of nature herself together with the numerous creatures she supports including tiny insects, plants, giant animals and of course human beings. This is reflected in the rather unusual title Manhood, Grasshood and Birdhood.

Mukhopadhyay's poems use simple language and form to make absolutely clear the message he wishes to convey. Many of the poems in the first section Manhood and Grasshood are fairly long prose style poems, occasionally with rhyming endings, this contrasts considerably with the much shorter, often only three line poems in the second section - Birdhood. These poems have a Japanese feel and style, though, perhaps arguably, they are technically not Haiku, varying as they do in length and syllable arrangement. The book is nicely produced and printed, runs to eighty eight pages and the Birdhood section is illustrated with numerous black & white images of the various birds which are the subject matter of these poems.

Many of Aju's poems have a spiritual and philosophical underpinning, questioning motives and our actions on the environment and each other.

In An Attitude to Life (p. 32) the following excerpt presents a deep philosophical observation.

Man's life is not
like the birds and animals;
it has extra sense and conscience
pride and prejudice
surpassing everything in subtle sense;

Many poems have wonderful imagery and use of metaphor, for example in The Past (p. 33)

dust flows and gathers like time
coming in or passing out;
time is a dusty affair.

Many of Aju's poems are concerned with the big issues of environmental and life destruction such as the nuclear bombing of Hiroshima and Nagasaki, and then the nuclear disasters of Chernobyl and Fukushima. He sees “nuclear” as an evil force (p. 23), with no match in previous history. These poems are in quite stark contrast with some of his shorter poems such as Mili. (p. 38) This wonderful, gentle poem comments on the timeless and inevitable transition from innocent childhood to adulthood. I found this poem very moving and the line, “forgetting her lollipop days” captures perfectly the passage from the carefree innocence of childhood to the responsibilities of adult life. Here's the bitter-sweet poem in its entirety.

School bag tied to her back
looking in front she walks;
no more whimpering
to get into her mother's lap
no more carried in a push cart
no more sucking her thumb, she walks alert
leaving all who reared
freeing herself from those
who so long for her cared
forgetting her lollipop days
she walks apace
with her bright eyed juvenile friends;
she walks, dreamy eyes, towards the future
like all her known and unknown predecessors.

Again in The Fallen House (p. 42) Aju comments on growing up - here he uses the emotive affect of colour with wonderful imagery to help the reader visualise the beautiful home he grew up in, which at the end of the poem has become a deserted run-down place with no heart and “dismal walls gray and dull”. Here's the first verse:

I was in my prime youth when I left the house
flooded by different hues in different rooms-
satin blue of the sky and pinkish love-rose blooms
bright yellow of the sun in the stairs
youth-wild green in the balcony;
'twas a grand affair
when every wall, each nook and corner smiled
each space exuded a sense of revelry.

Aju like most serious poets contemplates the big questions and ponders the nature of existence. A friend once remarked “great poets are seers not only concerned with their personal petty concerns” Aju's poetry certainly fulfils this criterion, especially in his perception of time. In the poem Invisible Companion (p. 48) he struggles with nature of time using white lotuses as a motif, a few lines:

In the next section Dwelling In Nature we find lovingly crafted poems celebrating the magnificence of Spring; the journey from night to day; the greed of mindless humans stealing turtle eggs and killing the turtles for food; and the destruction of native habitat. In Spring of Life (p. 52), Aju celebrates the joy all people feel with the emergence of Spring and new birth:

spring draws close to heart
all living things on earth
for rebirth;
spring is great
creative laughter
of Nature;

The last poem in this section The Grasshood (p. 63) celebrates the humble, but incredibly resilient nature of grass. Grass is a very much misunderstood plant with a huge variety including wheat and bamboo, as such it feeds everything from mice to men to elephants, “but happy grass never dies/living humbly with the head high.”

The final section of the book Birdhood: Bird's' Lifestyles has its own index, black & white illustrations, and concentrates exclusively on the activities and the lives of birds. Aju is an astute observer of these wonderful creatures and expresses these observations in very brief, precise three to five line poems. These poems are like little spiritual insights, similar to those of traditional Haiku, one can imagine the poet having brief moments of Satori in his field excursions from these poems. Demoiselle Cranes (p. 85)

This volume of poetry will make an important addition to the libraries of all lovers of fine verse, and for those who need some reassurance that the natural world with all its inhabitants needs careful and immediate nurturing.

The final poem Red-wattled Lapwing (Sleep) (p.88) in this unique collection of insightful and thought provoking poems is simply a treasure. Much has been written about what a poet's job is, perhaps this poem helps us understand one important aspect of that job, “to save the sky from falling.”

on its back, legs upward
sleeps at night red-wattled lapwing
to save the sky from falling;
to support, guard sibling.

‘Manhood, Grasshood and Birdhood’ is available, outside India, by contacting the publisher by email and requesting price including postage to Australia.
prakashbookdepot@gmail.com