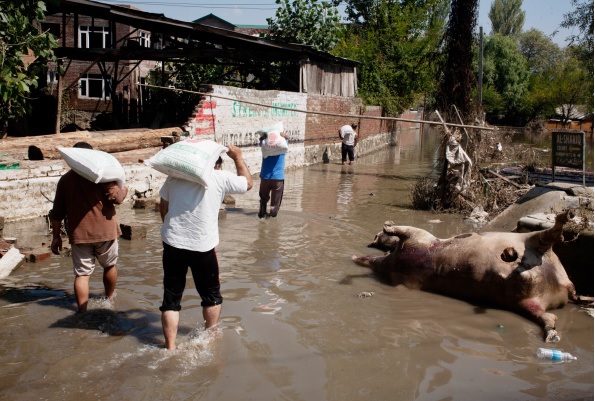 Kashmiri flood victims carrying food sacks walk on a submerged road in a cow carcass on September 18, 2014 in Srinagar, the summer capital of Indian administered Kashmir, India. Nearly 100,000 people are still marooned in the areas of the Kashmir Valley submerged in flood waters. The floods in the Himalayan region of Kashmir were believed to be the worst in decades with over 200 dead. Health experts are worried the stagnant waters and floating carcasses of livestock could create conditions for serious outbreaks of disease.

These days media is rife about the recent tragedy that struck Kashmir. Last year in June we were reading about Uttarakhand, especially about Kedarnath, where unaccountable number of people perished. Likewise in 2008 and 2007 it was the Kosi River that had created havoc in Bihar. In 2005 Satluj came like a monster on the Nathpa-Jhakri Power House, in the Kinnaur district of Himachal Pradesh and hit the population settled on the banks. The list is almost endless.

It is not that damaging and destroying flash floods or regular floods have started to occur, now, after we learnt of the Global Climate Change. They have been occurring since ages. There are historical, scientific records to prove this. In 1893 a spur of mountain fell over Birahi Ganga in Garhwal, blocked the river and a dam was created. Later, in 1894 part of the dam burst and a column of water about 140 feet high rushed through Chamoli. By the time it reached Haridwar, the column had lost much water and it was only 11 feet. If you try to read between the lines, you will find that the word ‘only’ has been inserted especially to emphasize the magnitude of water, vis-à-vis present situation.

Imagine, if the nature decides to repeat the history, what the scenario would be like! Since 1893, lot of water has flown under the bridge at Chamoli and the population has swelled multiple times. Likewise, all along the Alaknanda the scenario is same. In 1894 only a family of five perished at Srinagar, that too despite the Government’s strict warning, they went back to their house to collect some more belongings and perished, because the River decided to engulf the township at that very moment.

But now the number of people settled on the banks of Himalayan rivers, whether Jhelum, Satluj or Alaknanda is tremendous. The rampant denudation of the mountains by our destructive way of construction has made them more vulnerable to heavy landslides and flash floods. Perhaps we are either not concerned or we always presume ‘flood waters cannot reach my house and even it reaches, I will move to the third floor.’ 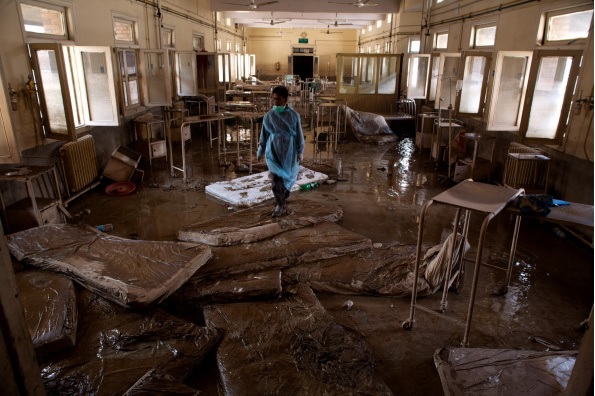 A Kashmiri volunteer walks in the silt covered ward of Shri Maharaja Hari Singh Hospital after the flood waters receded from the area on September 20, 2014 in Srinagar. Locals and doctors had managed to evacuated hundreds non-local medical students and patients when the floods hit the hospital.

This is what happened in Kashmir recently. A friend disclosed that 16 years ago he left India to take a job in Dubai. At that time he moved his extra furniture to the third floor attic of his house in Rajbagh, Srinagar. That furniture lay there, intact, awaiting the owners to return. Last year the friend’s wife came and took out the furniture crates and located them in a ground floor room to be taken to Lucknow in 2014 – as they were to finally shift to this place. They did shift in the first week of September, but by then Jhelum and all tributaries had changed their minds.

Surprisingly, in February 2014 (12th to be precise), through an article published in a net magazine Greater Kashmir, the writer Firdaus Tak had forewarned of the possibility of a massive flood hitting the valley. This warning was based on the information obtained from government sources, which said a water discharge of 150000 cusecs, if floods hit Srinagar. The authorities were anticipating a flood that would submerge Srinagar-Jammu road and even the road to the airport. Yet no steps were taken to forewarn the people.

In Kedarnath last year, the Indian Meteorology Department had forewarned about heavy to very heavy rains, but their warnings were pooh-poohed by all those who matter in the government. The topmost bureaucrat of Uttarakhand was on record in Zee News Uttarakhand, saying that ‘IMD issues such warnings at least three times a day; if these warnings are taken a note of the state would be paralyzed!’ Well yes, the state did get paralyzed badly and severely and the state is still smarting from the injuries of the disaster.

The errors on part of the state were several, but the greatest was unchecked and unregulated movement of pilgrims-which increased the number of deaths. The second mistake was unchecked and rampant construction at Kedarnath, the fragile eco-system of the place is not strong enough the bear the load of so many buildings. Moreover I’ve said elsewhere, Kedarnath is a water-world-it is a kind of marsh. You can’t construct buildings there with ordinary designs-you need specialists to do that. These buildings became impediments for the free flow of water and thereafter what happened is now history.

The story of Kashmir is no different. Before going in to that, it is important to know in brief about the flat valley of Kashmir. Ever thought, why it is such a flat valley in the Himalayas? Ever seen a lake? The water surface of the lake is flat and placid. The shores are sometimes marshy. Now imagine this lake desiccates all of a sudden. The outcome will be a flat bed of the lake. Not much of science is involved in understanding this-just common sense. It i8s also common sense that the country-side slopes towards the lake, that is why it contains water!

There is another fact about Srinagar, which many people do not know. In 1935, while searching for fossils on the slopes of Pir Panjal Range, around Srinagar, Prof. Birbal Sahni a renowned paleo-botanist discovered the fossils of Trapa (Water Chestnut). Mind you this fruit grows only in lakes. It was discovered almost near the top of the mountain range. Thus, he concluded that there was a huge lake in the past, which was almost full till the brim. Much later, due to tectonic activity an opening developed near Baramula and the lake began draining through there. The gap is still there and Jhelum flows out through that.

Now with this background, it is clear that the valley itself was a huge lake. Once water was drained out, there were remnants of the lake and marshlands. Jhelum carved its course through the lake bed. Naturally, it had hardly any slope. Thus, during lean periods if you watch Jhelum you hardly notice any flow.

This year’s floods in Srinagar were nothing new. Since 1902 there are records of many such floods. But then there was not such hue and cry? Well it was there, but only to the extent of getting a dredger from Central Government and also a 42 km long canal was constructed after 1902 floods from Padshai Bag to Wullar to divert excess water in Jhelum. Mind you after 1902 floods, the valley remained cut off from the rest of the world for two years, as it remained marooned.

We are incorrigible people and never seem to take lesson from history! There was total apathy of the government in allowing or permitting colonies to come up in the marshes filled with urban waste. Even the canal vanished in the process. The government, as in other parts of the country, religiously jacketed Jhelum. The bunds are still there, but of use?

There is a saying in Tamil, which translates as, ‘an old cat when she sleeps, she thinks that the whole world is sleeping.’ Thus, the government took those bunds as ample measure of flood control and went in to hibernation as far as granting permission for a construction spree in areas close to river. There is a general thumb rule (though it is nowhere followed anywhere in India) that there should be no construction activity in the ‘Flood pathway’. The flood pathway is the area flooded by a river up to a depth of one foot in past 100 years. What to thi8nk of 100 years, even records of past ten years are not checked.

In plains this thumb rule is flouted with impunity. But in plains, if there is a warning in advance, people can flee to safer areas. In the Himalayas, due to terrain considerations such escape is almost impossible. Remember those who tried to flee in Kedarnath last year, by climbing the surrounding mountains, just vanished. Their bodies may be found some day, preserved in ice by some mountaineer!

Fortunately in Srinagar, the death toll has not been that high, but still even if a single person dies, the blame goes to state only.

We must remember that we are in the thick of global Climate change-a phenomenon which had started some 18000 years. It is an unstoppable process. Apart from us, many natural agencies are also active in enhancing the impact of the process. The worst impact is sudden floods and sudden droughts. We are witnessing the two every year, yet we are behaving like the sleeping cat. The governments of the Himalayan states and the people have to wake up, unless both of them are in doing a ‘Harakiri’!