Alcohol: To Drink or Not to Drink

Out of the aliphatic alcohols only ethanol or ethyl alcohol is consumed by human beings. Alcoholic beverages have been used by man since the dawn of history. The oldest alcoholic drinks were prepared naturally by yeast fermentation of starch, sugar, potatoes, or sugarcane. These beverages had a relatively low alcohol content, as a higher alcohol concentration itself checked further yeast fermentation. Beers contain 3 to 6% alcohol, and table wines about 12 to 15% alcohol by weight. 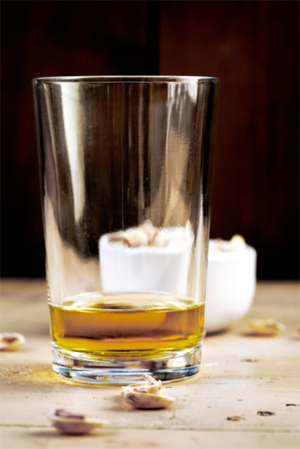 When the Arabs introduced the technique of distillation in Europe in the Middle Ages, the alchemists believed that alcohol was the long-sought 'elixir of life'. Alcohol was thus held to be a remedy for all diseases, and the term "whisky" stood for "water of life". The process of distillation increases the alcohol content greatly, and in most countries the law has set limits on the alcohol content which is sold in the market. Roughly, one bottle of beer, 45 ml of whisky or gin, and 120 ml of table wine contain the  same amount of alcohol.

Lets consider In brief, the effects of alcohol on the human system. On ingestion alcohol is rapidly absorbed into the blood stream from the stomach and the intestines. The rate of absorption can be delayed by the presence of food or milk in the stomach. On an empty  stomach, most of the ingested alcohol is absorbed within 30 to 60 minutes. It is transported to almost all parts of the body, but the effects are most pronounced on the brain. The effect on the central nervous system (CNS) is directly dependent on the blood levels of alcohol. Very  low blood levels usually produce mild sedation, relaxation, or tranquility. Slightly higher levels, in some people may produce behavioral changes like talkativeness, aggressiveness, and excessive activity, suggesting a stimulation of the brain. But this is actually due to the  depression of the higher brain centers which normally inhibit or restrain such behavior.

At still higher levels, greater depression of the brain occurs producing unsteadiness, confusion, disorientation, coma and death. Thus alcohol is always, and in all doses, a depressant of the  CNS. One's personality has a great deal to do with one's behavior under the influence  of alcohol. Some drinkers become talkative, others quiet; some become more friendly, others abusive or even violent. The kind of crowd that a person is drinking with, and the atmosphere of a party also influence his behavior --- making the 'set' and 'setting' a deciding factor.  Drinking parties are usually held in the late evenings. The next morning the drinker suffers a "hangover" (residual CNS depression), which is an unpleasant after-effect of an overindulgence, marked by a headache, fatigue, confusion, anxiety, and vomiting. No satisfactory treatment is available for this malady.

Now why do people drink? People drink for a variety of social and cultural reasons. For some the use of alcohol is a prerequisite for activities like family get-togethers, gala dinners, or an evening with friends. Some drink to forget themselves, and share their worries. While others drink to display their status and develop social relationships, or just to get drunk.  The basic cause for the drinking habit is complex and unclear. Contemporary views implicate biological, psychological, hereditary, and sociological abnormalities, with no single factor supplying a satisfactory answer.

The individual's chronic abuse of alcohol has far reaching ramifications. It produces a progressive deterioration of his physical and mental health. The pattern of alcohol intake ranges from its occasional use to relieve emotional stress to periodic "spree" drinking at which a large amount of alcohol is consumed. In extreme cases the alcoholic loses control over his intake, or has lost the ability to abstain from alcohol even for a day, as a miserable "withdrawal syndrome" occurs on doing so. Thus, alcohol produces tolerance, psychological and/or physical dependence, and the individual slips into alcoholism, which becomes the cause for crimes, road accidents, and other socio-economic problems. Alcoholism leads to financial disasters, destroys the family unit resulting in a broken home.

Alcoholism leads to many medical complication like gastritis and ulcers, liver damage, liver failure, and heart diseases. Damage to the nervous system leads to delirium tremens, dry beriberi, Wernicke's syndrome and Korsakoff's psychosis. Ignoring technical jargon, what actually happens is that the brain cells are damaged leading to a decrease in intellectual abilities. The skeletal muscles are weakened, and even walking may become difficult. The heart muscle is damaged, leading to heart failure. There is superimposed malnutrition in alcoholics leading to further complications. Consuming ethyl alcohol contaminated with methyl alcohol is far more dangerous, and in addition may lead to blindness. Thus, as a result of alcoholism, the brain, the liver, the skeletal muscle, and the heart are damaged, and the person becomes a physical and mental wreck. He becomes a burden on his family, leading to complex sociological problems. Management of alcoholism is extremely difficult, and involves prolonged medical treatment, psychotherapy, education and enforcement of restraint by law. All of these can be effectively avoided if one abstains from drinking, So why drink?