Death: A Reality of Life 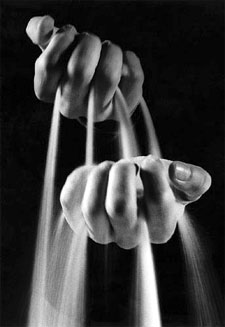 'The most difficult in the world is to appreciate what we have ' until we lose it.'

If you were going to die soon and had one phone call you could make, whom would you call and what would you say? And why are you waiting? This is not any joke but a hard-hitting reality to acknowledge and accept by each one of us. We all need to accept the fact that we are all living life but moving toward its final destination ' death itself. That is why it becomes essential to accept each minute as an unrepeatable miracle!

Can man be rightfully called a thesaurus on the basis that he has acquired immense knowledge and intelligence? Is he a really a treasury of knowledge and if that is the case, then has he been able to understand and resolve the mystery and philosophy surrounding life and death? Each day passes away with people dying at different places in different ways. And we wait our turns, with questions on our minds ' 'When?' 'Where?' 'How?' If man is able to answer these questions ' he may then be rightly credited with resolving the toughest mystery on earth.

Life has got many scholars and thinkers to ponder upon and fondle with. It has many takers and lovers, but death, like defeat, is an orphan. It has simply no takers- at least no voluntary ones. We are so engrossed in our mundane lives that few of us bother to think over the fact of death and life after death. Thus, the subject of death ought to be scrutinized, more so because there is no greater reality than death itself. A debate can easily be initiated on whether death is the last, final awakening or rather the ultimate slumber; whether it is an integral part of life or a separate entity that is exclusion to life. Someone has remarked:

'Life is eternal;
and love is immortal;
and death is only a horizon;
and a horizon is nothing save the limit of our sight.'

According to this thought, life continues beyond death. And death is just like an illusion, limiting our vision in life. It can be treated like any limitation to be overcome or overlooked. Apparently, death and life cannot co-exist. Death exists only when life ceases. As a doctor, it is easy to accept death as a natural part of life...for others, there is nothing natural about it! Death can be painless for one and painful for another. It can be so sudden for some while expected for someone else. A curse for one, a blessing for another. A tragedy for one, a relief for another!

Islam regards death as the separation of the soul from the body when the body perishes. The Holy Qur'an provides clear explanation of this fact and its implications.

'Every soul shall have a taste of death and on the Day of Judgment he will be paid full recompense. Only those who are saved from Hell Fire will have attained the true object of this life' (Sura 3rd; 185).

Qur'an states that God will raise the dead up and they will be turned unto him. No soul can die except when it has been planned by God. When the angels take the souls of the unbelievers, they smite their faces and their backs, telling them to taste the penalty of the blazing fire because of their worldly deeds, for God is never unjust' (8th Sura; 50-51).

Talking about the ungodly and transgressors, it is mentioned (14th Sura; 17) that death will come to them from all quarters, yet they will not die. The door of escape by annihilation is also closed to such a lot!

The one who goes to his Lord as a sinner, at Judgment, for him is Hell wherein he shall neither die nor live (Sura 20th; 74).

Qur'an presents a terrible picture of those wrongdoers and transgressors. Those who do good and follow the path as prescribed by Islam, for them is good in this world and better in the hereafter. 'God rewards the righteous whose souls the angels take in a state of purity, blessing them with eternal bliss and peace' (Sura 16th; 31-32).

When someone dies, it seems unbelievable that the existence of that being has vanished. Someone, who is a child, spouse, or a parent to someone, does not exist any longer. He just won't be where he used to be; his presence is replaced by his absence. He won't be there to talk, act, eat, and sleep. His time in this world is over and he is gone for good. A person dies alone, leaving others to survive him, mourn him, remember him, praise, or curse him. And when all this is over, the impact is washed off, as if there never was any!

Life goes on as if death never existed. But people keep on dying everywhere around us. People die in mysterious, strange and sudden ways. Is it just a trend or an indication? This apparently simple trend is not to be taken so casually. It can be an indication of near-approaching doomsday or rather the Judgment Day. Does God want to awaken our minds and souls with such deaths? Is God giving us a warning, a signal that we ought not to take death for granted? It can come to us anytime, anyhow and anyplace. It gives no consideration to age or circumstances; no second chance, no turning back.

Ideally, we ought not to be afraid of death as it takes us back to our creator. But we still are; the reason being that we are never prepared to meet death due to unfinished 'business' in this life. Because we keep on postponing our resolutions of repentance and worshipping God in the way we are directed to for older age. Because we know subconsciously that we are not in a position to justify our deeds and lifestyle in this life. Because we know we have nothing to profess for the time spent in this world. Because we are ashamed of our transgression and wrongdoing. Because we have no answers, no accountability for our lives, which have been spent in ignorance, negligence, and carelessness. We keep on coveting the perishable and probationary materialistic things in life at the cost of a pious, sincere life to be spent in worshipping the Creator for his mercy, blessings, and favors.

However, we can still save our future from eternal ruin. Let not the deaths of our dear ones be in vain, rather it can be an awakening for us all. We need to ponder over the options left with us-either to enjoy this worldly life and ignore death and its implications till it comes or to prepare for it mentally as well as spiritually. These are the two choices. Two paths to take. One is easy. And its only reward is that it is easy. The other demands faith, belief, courage and perseverance.

'Life is Fragile;
handle with prayer.'