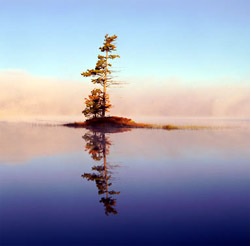 Basking in reflected glory is a natural phenomenon. Our own moon is the best example of this. It produces no light and has no energy, but shines at night brilliantly reflecting the light from Sun. Yet we consider Moon as great and some even consider it as divine. Then we have the wild animals like lion, tiger and elephants. Little do they realise how insignificant are they in these days of AK-47 and missiles. If some of them are managing to be alive today, it is only due to the conservation laws enacted by a few sane human beings. Yet they too bask in the reflected glory of their predecessors who ruled the jungle during the days of bows and arrows. The case of most celebrities among us today is similar to this. Only a miniscule percentage genuinely deserves the status they attain in society. Most of them shine due to greatness of some illustrious grandparents, some due to lack of competition, some due to thick skin and a majority in the reflected glory of their 'right' connections.

A vast majority of celebrities in conservative societies fall back on the glory of their predecessors for survival. Family names become very important for such people. There might have been only one outstanding personality in a particular family for generations and he or she would have earned a name by hard work and dedication. And when the real celebrity is gone, the reflected glory will stay on for generations. If the original celebrity was a literary giant, some of his Lilliputian progeny tend to earn their living by appending the original family name to remind the readers. We have several such writers and poets in India. The current progeny in the family may not even know the language well, yet his or her works will sell in the name of the family. Similar is the case in politics, business and almost all other walks of life. What needs to be decided on the basis of relative merit among competing players gets decided on the basis of merit of relatives. Real Merit is often the casualty in this war of relative merit against relatives' merit.


Consequences of worthless progeny coming to power in the reflected glory of erstwhile meritorious rulers can be far more disastrous. While we can always avoid a work of literature or arts, the efficiency of our rulers have a direct impact on our own lives. The South Asian phenomenon of 'Family Democracy' (also called 'monocracy' - http://www.pseudodictionary.com/monocracy) is an example of this. So many wives, sons and daughters are getting elected democratically in the reflected glory of genuine talent that once existed in the family. The fact that they are getting elected by the people makes the situation all the more worrisome. The so-called best form of government is getting hijacked by the worst traits of mediocrity and that too by legitimate means of elections. As in outer space, Moons shine in reflected glory and the real Suns burn their energy out with no appreciation or acceptance.

Identification and recognition of genuine glory becomes imperative in this scenario. The two sure signs of genuine glory are contentment and stability. People of genuine glory are like pots filled to the brim. They do not spill so easily. It is very difficult to see such people in exited state and almost impossible to hear anything great about themselves from their own mouth. The work they do and the way they do says everything about them. A great talent does not need any publicity. The bees of fame will always find their way to the nectar of talent in these glorious flowers. In rare cases the recognition process occurs posthumously. But their late glory is second to none, like in the case of Srinivasan Ramanujan, and their fame multiplies more than others as time goes by. Name and fame of those with real glory survive centuries in comparison to the couple of years of fame for the paratroopers into reflected glory. No memorial and no ceremonies can ensure remembrance for the undeserving in the minds of ordinary people.

Another remarkable finding in the case of all great men is the age they attain greatness. Barring a handful of prodigies, all the men with genuine talent have blossomed into fame in the later half of their lives. It is quite akin to the natural process of birth, struggle, maturity and finally ripening into full stature. We can always find this in the case of fruits. Those which have ripened without maturing will be good for nothing. The same holds good for humans. Many of our celebrities, especially in politics, are fruits that have ripened without maturing. Political leaders who disown their mentors in public, writers who denigrate their predecessors for publicity and actors who forget their less successful colleagues are good examples of this bad phenomenon. Those who bask in the reflected glory of others can never even aspire for fame if they exhibit traits of ingratitude and treachery.

All great glorious beings lead active lives during their lifetimes but their contributions always transcend the times. Be it social reforms, literary works, inventions or developmental works, the transcendental nature of their contribution is a common feature. When Mahatma Gandhi led us to throw out the illegal occupiers from our mother land, he not only liberated the Indians but the whole of mankind under colonial rulers for all time to come. It is yet another characteristic of genuine glory that it transcends time and place. Glorious are those with genuine talent who live and die for others. And undeserving are those who serve only themselves in the reflected glory of others.