Today's Development: A Curse in Future!

Rise in global population and rapid development for a comfortable living in a society has resulted in a tremendous pressure on the environment. Environment is a term, which requires to be understood carefully. It is not only the forests or the toxic effluents, which make the environment. On the other hand this term includes everything around us. The Air we breathe; the land we dwell upon, the water we consume or even the subsurface bounties we mine are all part and parcel of this term environment.

The dictionary meaning of the term Environment is 'something that surrounds'. Our existence depends upon the environment and much of the quality of the environment depends upon our actions. If the environment degrades, life is in peril. Unfortunately development and environment never go hand in hand. This is more so in a developing country like ours. Construct a road, in a mountain to link places, it generates landslides. Start mining for fossil fuel like coal or any other mineral, it causes land degradation. Construct a dam and precious farmland and population is submerged.

A question comes to mind that under such circumstances what should be done! After all a nation has to develop, the pressures generated by the rising population have to be eased out.

The environmentalists suggest a term 'develop in harmony with nature'. Strictly a utopian concept, but there is dire need to understand what happens when we start a development activity in good sense without understanding the terrain of the intended development and remaining blissfully ignorant about the future repercussions.

A dam built today ushers all the happiness because it provides the much needed power and water for drinking. In the downstream areas where the stream flow is now 'regulated' things begin to change. The river shrinks in volume leaving vast sand banks on the mercy of the forces of the nature.

Through the following narrative we shall see how a well engineered structure meant for a noble cause could lead to a disaster in long term. It also makes an interesting reading to learn how such mistakes due to ignorance are converted by the vile in to stories of myths or miracles.

Prior to the development of scientific thought, the human thought process revolved around myths and miracles. Despite spread of education and strides in the scientific world, plenty of myths, superstitions and beliefs in miracles do rounds in our country. Often the media is flooded with reports of 'trees shedding tears', statues of deities drinking milk etc. Somehow the scientists in general have stayed away from exploring and exploding most of such controversial issues. 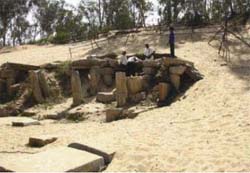 A small historical town Thalakaadu in Mysore lies deserted today because of a four centuries old curse. It was sheer curiosity that motivated K.N. Ganeshaiah of the School of Ecology and Conservation, University of Agricultural Sciences, GKVK, Bangalore to probe the curse on Thalakaadu.

During 12th to 13th century Thalakaadu was a flourishing city, bustling with activity. Towards the end of early 15th century it came under the Vijayanagara rule. The Vijayanagara rule lasted till the end of 16th century. About a dozen temples, spread over an area of about four square kilometer reflecting the rich art and culture that emanated once upon a time are from the area. 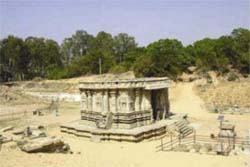 Alas the temple town of Thalakaadu is now a deserted remnant of past glory. It was abandoned for a strange reason, the curse. Alamelamma or Rangamma, wife of erstwhile Governor of Vijayanagara rule, despite being extremely pious was charged with theft of temple jewels. It is believed that the jewels belonged to her, hence instead of parting she escaped with jewels to Thalakaadu some 40 km from Srirangapattana. As the pursuers came on her, she uttered three curses before jumping in to Cauvery River. She said, 'Let Thalakaadu become a land of sand, let the river at Malaangi turn in to a whirlpool and let there be no sires to the Mysore kings.'

Human psyche is strange, people still believe in these curses and take them as true! As evident the second curse about the whirlpool at Malaangi is a feature that was already present as the lady had jumped in to the existing whirlpool. The remaining two need some explaining.

The old town of Thalakaadu gets swept by sand frequently. It seems that in the past 400 years accumulation of sand has been so much that it has to be specially removed from some temples where periodic ceremonies are held. Some of the older temples (ca.1200) are under more than 20 m sand cover. It is an acknowledged fact that since ca. 1600 the problem of a rightful heir to Mysore state has been continuing.

Are these two real curses or there is a scientific explanation for them? Ganeshaiah has tried to collect evidences and tried to explain them scientifically in Current Science (Vol. 93, No.11, Dec. 07).

Ganeshaiah has at the onset stated that 'the three syndromes of the curse were already visible during that period and the curse has been intelligently moulded by someone with vested interest'.

After a thorough probe, Ganeshaiah has postulated three possible reasons for excess sand being blown to Thalakaadu. Locally near Thalakkadu he says is an active fault, which has made the river take several sharp turns. It is because of the fault Thalakaadu is surrounded on three sides by the river. It is a known fact that a river deposits its load on the concave side and scours the opposite bank. Thus in all likelyhood the river in spate carries lots of sand which gets deposited at Thalakaadu, being on the concave side. Malaangi, the village on the opposite bank, being situated on the convex side has to face the ire of the stream and the area has been constantly scoured since ages. The river erosion is such that the village temple has been completely ruined with its remains strewn all over the area says Ganeshaiah. One of the reasons for excess making headway to the village could be due to constant deposition by the river. However, the river there is thousands of years old, whereas the sand built up has been there since past four centuries only.

One of the explanations has been given by S.V. Srikantia an eminent earth scientist of Geological Survey Of India. He alongwith T.R. Anantharamu had examined the sand dunes (mounds of sand) and published their findings in the Journal of Geological Society of India (1997). A river as it flows carries its load in the form of sand. The size of the grains depends upon the velocity of the river, gradient etc. Total volume of water in the river varies from season to season. This results in river dumping sand where the stream promotes deposition of material. Such linear sand deposits are termed as point bars or sand bars.

On the left bank of Cauvery is one such sand bar, which is the main source of sand for Thalakaadu. Some 400 years ago a weir was built upstream of Thalakaadu to divert water from Cauvery to Madhavamantri canal. As a result water level was lowered in the point bar deposit near Thalakkadu and exposed the sand to winds blowing from southwest to northeast towards old Thalakaadu town. The settlements in the town acted as barriers for the sand carrying winds, which resulted in deposition of sand dunes. D.V. Devraj (1996) and his co-workers had worked out that sand particles are moved at a rate of about 7-10 feet per year (Directorate of Archeology and Museums in Karnataka (Vol. I). Ganeshaiah adds to this observation that the sand grains become finer as one approaches the settlement. The coarser sand which accumulates on the river bank every year is lifted by the construction agencies. The finer particles keep moving towards the town.

Local sinking of the town is another geological factor contributing to larger quantities of sand blowing into Thalakaadu. The present situation of the drainage pipes of the past is far below the level of the river bed. It is logical that a drainage pipe has to be at a higher level then only it would function normally. Since the river flows through an active fault zone, such sinking cannot be ruled out. This has resulted into a wider expanse of sand bank and has created more sand deposit to be blown towards Thalakaadu.

The Archaeological Survey Of India's findings suggest that the sand movement started some 400 years ago. Thus Ganeshaiah concludes that someone at that time was intelligent enough to sense that due to natural reasons the ecological disaster had been initiated and he spread the canard of the curse. Local belief got stronger as more and more sand blew in and vacation of habitation became imminent.

Ganeshaiah has also exploded the myth about the rightful heir to the Mysore kingdom. He says that a few years prior to the curse a rightful heir was born, but died a premature death. Such situations have happened three times in the past he says. Due to non-availability of a rightful heir, the royal family resorted to adoptions from genetically close links, leading to inbreeding which perhaps led to the problem! 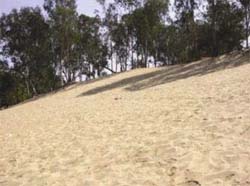 M. Vishweshwaraya, a renowned engineer of the past had understood the problem of sand movement and erected 'wind breaks' by planting eucalyptus trees. Recently it has been noticed that further movement of sand has been halted due to the barrier of these trees.

The anecut constructed by Madhva Murari a minister for Vijayanagara regime in 1336 just upstream of Thalakaadu was meant to provide water in all good faith. In fact it is an engineering marvel. But what the well meaning Minister could not foresee was the impact of such a structure in the times to come. With the advancement in science and technology, it is possible to forecast the impact of contemporary development works. However, a political will has to be there to use the scientific studies for a development in harmony with nature.

Rampant 'development' will result in to many more towns buried under sand in the times to come.