Engulfed by the Sea

Water front has always fascinated the mankind. That is why the coastal regions of India have seen maximum growth and development. Earlier when land transport was not developed sea-faring and reaching places via the rivers on a boat was a common practice.

The coastal habitation is exposed to various geohazards like salinity in drinking water, cyclones, tsunamis, tidal waves and of course of late flooding as well. Yet another hazard that has affected our shores in the past is change in shoreline. Such changes in the shoreline are a common feature all along the coasts anywhere in the world. These could be due to seal level fluctuations, erosion, sedimentations and earth movements. Well, natural processes are in the hands of the Nature only. The problem comes when the pressure of the swelling population starts stressing the coasts. The coastal zone regulations are ignored by the settlers and the authorities both. The nature suddenly decides to change the shoreline and submerge the land all of a sudden. Habitations are lost and lives perish.

This has been happening since ages. A changing coastline affects the human settlements on the shore. Everywhere in the world, especially in territories where evidences of older civilizations are found, coastal zones often have submerged habitations. Marine archeology has therefore developed in to a specialized branch of studying such townships or other structures.

During the past 13000 years the sea level has risen from -100 m to +50 m. Such changes in the sea level have caused vast areas of the shores to be engulfed by the sea. Therefore the advantage of marine archeological and marine geological studies is that one gets exact configuration of the past shorelines. The submerged habitations speak volumes of the human folly of the past and also are a warning for the present day occupiers of the 'seafront' apartments and villas and resorts against the anger of the sea.

It is interesting to know that the history of the Baltic Sea is recorded through late Pleistocene and Holocene chapters from the prehistoric sites discovered from the sea bed. Similar studies in Sweden show that around 8000 years ago, the sea level was much lower as confirmed by the presence of Mesolithic site now in the sea bed. Similarly southern California coastline has shifted from 2 to 6 km in the history as evidenced from the remains of buried habitations in the sea.

The annals of the Indian history and archeology are full of reports of ancient settlements along the coast which are now submerged. The Mahabharata mentions about the city of Dwarka in the Gulf of Cambay and 'Manimekhalai, an ancient Tamil text has record of the submergence of Poomphuar on the east coast on Tamilnadu. Relicts of ancient settlements and temples have been exposed by the marine archeologists at Dwarka and similarly at Poomphuar off the west and the east coast. Similarly Mahabalipuram is yet another locality in Tamilnadu where several temple complexes now lie in the depths of the sea.

Recently A.S. Gaur and Sundaresh of the National Institute of Oceanography, Goa found archeological remains of a temple complex during a low tide off Pindara on the northwestern coast of Saurashtra and established changes in the coastline during the recent past. The ancient temple site of Pindara juxtaposes northern Saurashtra coast in the Gulf of Kachchh. Marshland Okha Rann is west of Pindara says Gaur.

The ancient site of Pindara temple complex is well sheltered from open sea-waves. The Hindu Epic, Mahabharatha mentions Pindara as Pindarka. Till as late as 8th century the site Pinda-tarakkshetra and was an attraction for the pilgrims. It is believed that this was part of an ancient city Devpuri, which was much older than Dwarka and was a favorite haunt of Hindu sages like Durvasa and Agastya. 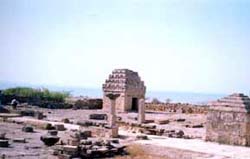 The Archeological Survey of India (ASI) has dated the oldest antiquity of Pindara belonging to Early Paleolithic (Middle Pleistocene chapter) of the earth's history, say approximately a million year old! Well to find stone-age relicts indicating a million year old human presence shows that this area on the shore of the Arabian Sea was being thronged by the ancestors. The find of Red Polished ware and Amphora from the locality give credence to early historical settlement and also a possible sea-faring community that had overseas interaction with the Mediterranean Sea. 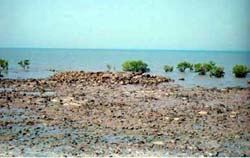 Between 7th to 10 centuries Pindara had become an important temple town with a huge temple on the coast.

As of today, on the shore stands a huge temple complex, which is a protected monument, reports Gaur. These temples date back to 7th to 10th century AD. They face east and have a square sanctum sanctorum. Amongst these the most famous is the Sun Temple located about 100 m from the high water line. 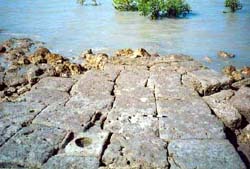 What is amazing about the place is that about 300 m offshore relicts of another huge temple were found by Gaur and his colleague. Of this temple only the flooring made of limestone blocks is visible. The vertical walls have been obliterated due to nature's ire or may be the dressed limestone blocks have been carried away! This is a Siva temple as confirmed by the presence of a 'Yoni'. Architecturally this relict corresponds with the existing temple on the shore.

The presence of a temple at a place now under the sea is perplexing. Though in simple words there was land where it is now sea. But what perplexes the geologists is that this is not in conformity with what has been deduced from the geological formations. As per that the highest water marks (strand lines) have been found +20 m and +6 m to +10 m dating back to Pleistocene and Holocene Epochs respectively. The presence of remains of three small port towns of Harappan period at Amra, Lakhabawel and Vasai gives further support to the geological observation that the sea level was higher.

Now this leads to the controversy. If the sea level was higher, then how the temple came in to being at the site exposed recently?

Coastal temple complexes of 6th to 8th century AD at Mahabalipuram and of 11th to 13th century AD near Poomphuar and Tranquebar on the east coast have been submerged. An archeological site close to Pindara at Bet Dwarka has shown a lower sea level some 2000 years ago. It means this coast has been unstable in the last two millennia. The sea level was lower between 2000 and 1000 years in Gujarat coast.

The fluctuating sea level could have been either due to Gujarat being seismically active. Though a precise reason has not yet been established, it is also being argued that the submergence could have been due to tsunamis that visited the west coast 1000 years ago.

It is time that the entire coast of the country is systematically studied by geologists, marine archeologists and oceanographers jointly to work out the sea level fluctuations of the past couple of thousand years. It is certain that as the climate warms up sea levels are bound to rise. Demarcation of past coastlines will certainly give some clues for the future rise of the sea levels. In the process many more temple and cultural complexes might be unearthed, which will also certainly enhance the heritage value of the Indian coasts.