I am sometimes disposed to think that there indeed are a few things in which our generation enjoys greater advantages than our ancestors – that is the facility of travel. We are indeed today having the inestimable advantage of being able to travel so rapidly and with so less fatigue, visit countries which were much less accessible to our ancestors. It is indeed a blessing to enjoy the sights, sounds and smells of another country, enjoy the peace of the mountains and rivers, the lakes, the sites of castles and the cathedrals, to understand their history and their cultures…

Sneha (my wife) and I had the good fortune to visit the magical city of Rome among other interesting places in Europe. It is a city that reeks of history. To us, a visit to each monument and every sight was a revelation.

Our first place of visit for the day was the Vatican. We just could not wait for the magical sights to unravel before us. As we began the drive to Vatican, we were quickly introduced to our guide who was to conduct us through the magnificent sites of Rome.

The Vatican and St. Peter’s Basilica was truly a stunning experience. As we arrived at the St. Peter’s square, we were welcome by a “spiritual embrace” symbolized by the two symmetrical colonnades of Bernini.  We were amazed at the size of the giant order of columns were build over 400 years ago stretching across the end of the square and greeted by the two apostles St. Paul and St. Peter. The beauty and the grandeur of the basilica, the concept, the history and religion attached to it was simply an overwhelming experience. It was an out of the world experience, where we felt the unseen presence of the Omnipresent.

Moving around the basilica we saw the Baptistery, the Chapel of the Virgin, the Clementine Chapel with the alter of St. Gregory, the altar of the Sacred Heart, the chapel of Madona, the alter of St. Peter etc. The basilica contains a large number of tombs of Popes and other notable people, many of which are outstanding artworks. The most significant of the sculptures was the statue of St. Mary of pieta, which was a marvelous piece of art by Michelangelo. It is a statue of Mother Mary holding the dying Christ on her lap. The serene face of Mary is really haunting. It signifies the belief that Mary knew that although Christ was dying, he was moving to eternal immortality!

Only when Sneha (my wife) drew near to the monument did it dawn on me she strangely appeared dwarfed by the scale of each painting or sculpture. Truly an overwhelming experience!!

After the enchanting visit to the Vatican we drove down to central Rome to begin unravel the other mysteries!! The city envelops you like no other and keeps enticing you with its care free and languid countenance, much more than most other destinations

It was a great experience to walk past each of those buildings built in while limestone, each excelling in grandeur and each iconic in its own way. The winding ways brought us to the famous Trevi fountain.

Millions of tourists and visitors come by this historic fountain, magnificent in its structure and eminence. People just stand by and look and feel the almost ethereal quality of this location. Millions too have through the ages made their wishes by the over shoulder throw of coins into its waters. It is believed that if we do so, we will soon have an opportunity to come back to Rome. Where and how this came about and why, is an eternal mystery. Sneha and I did that diligently, hoping we could back there once more in life…. We still hope for this belief to come through!

From the fountain of Trevi, we walked to the imposing white marble monument called Vittoriano II. It was build by King Victor Emmanuel to commemorate his victory over the papal army in 1861 where Italy was united and proclaimed Kingdom. The monument is dedicated to the soldiers who sacrificed their lives for the victory. The monument is still guarded by the Italian ceremonial guards.  The monument was designed by Giuseppe Sacconi. Construction of the monument began in 1885 and was inaugurated in 1911 to commemorate 50 years of unified Italy. The site on the Northern slope of the Capitaloline was cleared to make way for the monument but it is regretable that several relics, monuments and churches of the medieval Roman Empire was destroyed. 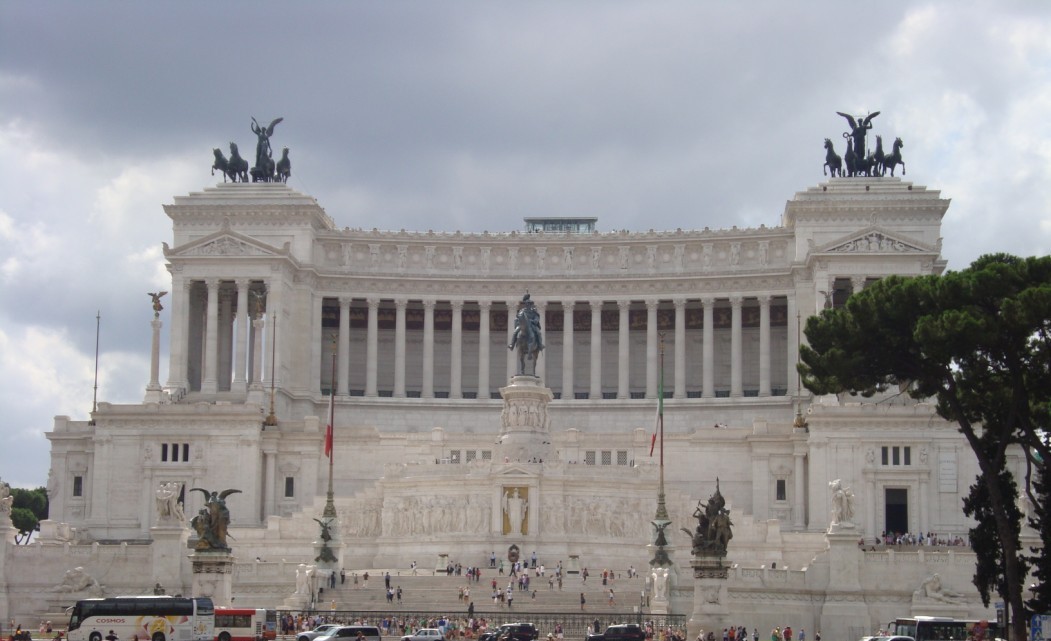 On the way towards the symbol of Roman Empire the infamous Coloseum, we got to see several ruins and relics of the Roman Empire. Though they were ruins, the huge pillars and the architecture spoke volumes about the grandeur and opulence of the times. We were particularly impressed by the Statue of Julius Cesar.

The Coloseum originally known as the Flavian Amphitheater is probably the most impressive building of the Roman Empire. Though the monument has fallen into ruins, but even today it is an imposing and beautiful site.

The elliptical building imposing in its height of 48 meters and could accommodate 55,000 people, was used by the Emperors to entertain the public with fights between animals and gladiators and also among gladiators. The gladiators were usually prisoners of war. While the structure was imposing it spoke of the untold suffering and cruelty that existed in that era. Honestly, it was not a warm feeling to be there. 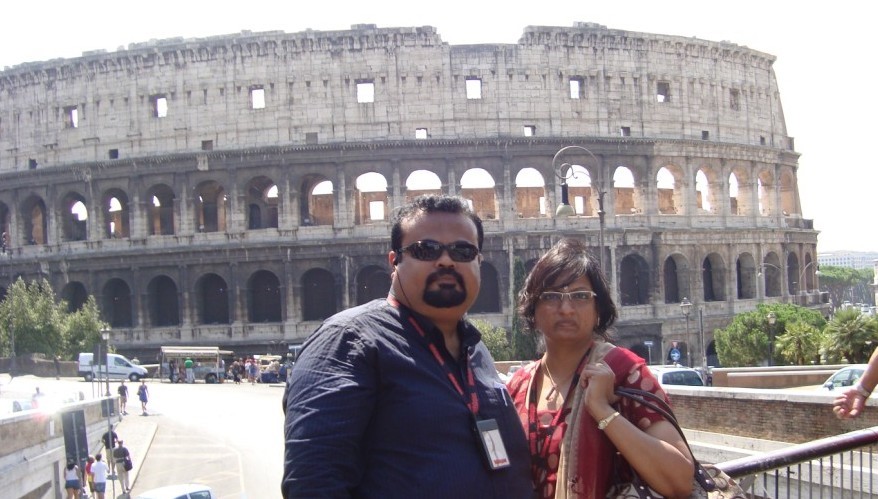 That ended our tryst with this historic and yet bustling metropolis the Capital city of the Modern Italy. It was a truly a visual, spiritual, emotional and intellectual treat – a memorable experience!!