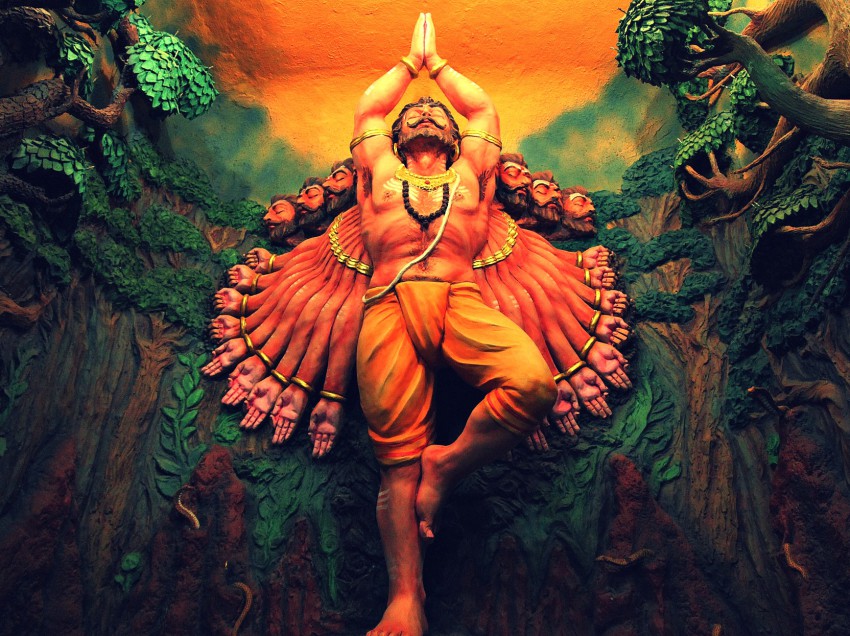 Ravana the King of Lanka observed that Vindhyan and Satpura ranges were uninhabited and besought Mahadeo to populate them. Mahadeo dispatched his messenger, the crow Kageshwar to find for him an ant hill made of red earth and the crow discovered such an anthill between the Saoligarh and Bhanwargarh ranges of Betul.

Mahadeo went to the place and taking of handful of red earth made images in the form of a man and woman but immediately two fiery horses were sent by Indra rose from earth and trampled images to dust. For two days Mahadeo persisted in his attempts but as often as the images were made they were destroyed in similar manner. But at length God created an image of dog and infused life in it which kept the horses of Indra at bay. Mahadeo then again made two images of a man and woman and giving them human life called them Mula and Mulai with the surname of Pothre and these two became ancestors of Korku tribe. Time went on and Mula and Mulai had childrens and being dissatisfied with their condition as compared with that of their neighbours, besought Mahadeo to visit them once again. When he appeared Mula asked him to give grains to eat such as he had heard elsewhere on earth. Mahadeo sent for Kageshwar again to look for grain and he found it stored in house of an outcast man named Japre who lived at some distance within hills.

Japre on hearing what was required besought the honor of visit from God himself. Mahadeo went and Japra offered him 12 khandis of grain, 12 goats and 12 buckets of water. Mahadeo was pleased with the offering and unwilling to reject it was in dilemma of considering to eat the food offered by an outcast man. So Parvati created the giant Bhimsen and bade him to eat up the food of Mahadeo.

When Bhimsen finished the offering it occurred to him that he was defiled by taking food of outcast man and in revenge he destroyed Japre’s house. Japre then complained to Mahadeo of this sorry requital and prayed to have his house restored. Bhimsen was ordered to do this who agreed to comply on a condition that Mula should pay him same honour and worship accorded to Ravana.

Thus Bhimsen came to be identified as local deity placed on sort of Ravana, the opponent of Rama, but for Korku tribe he was the originator of their race and while Hindu heroes Ram and his brother Lakshman are worshipped and Ravana is an object of dislike, it’s the same Ravana who becomes an object of admiration for the Aborigines. Even today the Gonds holds Ravana, the villain of Ramayana in high esteem as their Chief and is never portrayed as demon or Rakshasa.