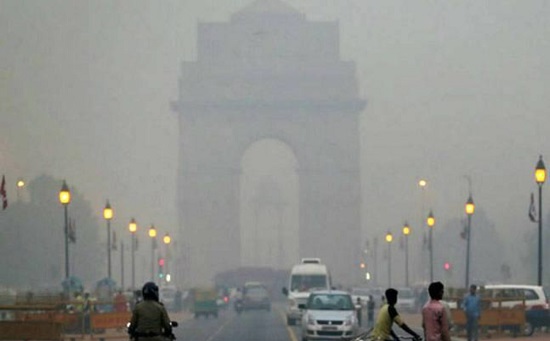 In the last one month there has been a tremendous deterioration in air quality of Delhi. Old timers who have lived in Delhi all their life have commented that never in their living memory have they seen such a bad quality of air.

The major reason seems to be vehicular pollution together with the burning of agricultural residues on farms in nearby states. The problem has been exacerbated by the arrival of dust- laden air from Middle East and Afghanistan which created a temperature inversion (the cold air is on the top while hot air is near the ground). This did not allow the smog and dust to disperse into higher atmosphere thereby creating death chamber like conditions on the ground.

The dust storms and other atmospheric phenomena have existed for millions of years but the manmade conditions of stubble burning and vehicular pollution are recent phenomena and hence the choking conditions.

There are enough existing solutions to alleviate the air pollution. However there is a need to have political and administrative will to implement them. This article will try to show how it can be done.

India produces anywhere from 600-800 million tons of agricultural residues per year. After harvesting of crops whatever is left behind are residues. As the farmer wants his land to be ready for the next crop he has to dispose off these residues. The fastest way to do this is to burn them in the fields leading to air pollution that we see all over the country.

In early 1990s an NGO called Nimbkar Agricultural Research Institute (NARI) in Western Maharashtra had pioneered the concept of using these residues for power generation and thus reducing air pollution. Their work showed that every Taluka had enough agricultural residues to meet all the electricity demands of that Taluka. This work led to a national policy on Taluka energy self-sufficiency in 1996 which was managed by MNRE.

Thus 600-800 million tons/year of agricultural residues can theoretically produce about 80,000 MW of electricity. Besides producing power the selling of residues to power plants can provide extra income to the farmers. Presently farmers do not make any money from the residues. For country as a whole this extra income for farmers can amount to about Rs. 3 lakh crores and can create substantial wealth in rural areas.

In 1995 NARI also developed the world’s first loose biomass gasifier running on agricultural residues like sugarcane trash, wheat straw and those from other crops. The gas from 500 kW (thermal) gasifier was shown to be useful for producing excellent heat for community kitchens. The gasification process produces syngas (mixture of carbon monoxide and hydrogen) which could be used for producing methanol – a useful liquid fuel for transportation.

Similarly pyrolysis (one step before gasification) of agricultural residues could easily produce pyrolysis oil which is a medium calorific value (CV) fuel with CV of 17 MJ/Kg or nearly 1/3rd that of diesel. This oil can be used as a cooking fuel in suitably designed cookstoves. Thus both gasification and pyrolysis oil production can supply clean energy for cooking.

All these technologies show that agricultural residues could easily be converted into useful products (electricity and liquid fuels) and in the process reduce air pollution.

For planting crops holes are drilled into the soil in which seed can be planted and then covered up. This is done by specially designed planters. This way the soil surface remains undisturbed along with the residues from the previous crop. For weed control suitable weedicides or natural control methods such as multicropping or use of allelopathic species as cover crops can be utilized.

NTA not only improves the soil but the soil erosion is reduced drastically. Since the stubble is not burned, NTA is also one of the best mechanism to reduce air pollution.

NNo till agriculture is practiced extensively in western countries with total area of about 160 million ha planted every year. Most of it is in Latin America, North America and Australia/New Zealand. Around 11% of worlds total cropland is under NTA. Farmers are finding no-till very remunerative since the area is increasing at the rate of 10 million ha per year. In India only in last 6-7 years NTA has caught up and it is being practiced mostly in North India with estimates of about 1.5 million ha under it. The reasons for such low level penetration are non-availability of economically priced planters, not enough publicity regarding advantages of no-till and non-availability of low cost weedicides.

AAnother method to reduce production of agricultural residues is to have perennial crops. It is like growing wheat, rice and oilseed crops on trees! Year after year the fruit (grains and oilseeds) can be harvested while the root structure (stubble) keeps on re-sprouting. This drastically reduces the energy in growing and harvesting crops and hence increases the remuneration to farmers. This is not science fiction or far-fetched idea. Very extensive work is being done in U.S. on perennial crops and there are good indications that in near future perennial wheat, sorghum and oilseed crops like Sunflower, Canola etc. can be developed.

In India there is a need to set up a national technology mission for perennial crops so that extensive R&D can be done on them.

One of the major causes of air pollution in cities is vehicular traffic. With increase in diesel vehicles in India this pollution has increased manifold. No matter how good the engine is, the stop-start and traffic jam conditions on Indian roads makes it run very inefficiently and hence produces increased pollution.

OOne of the best solutions for city air pollution is to have mobility based on electric vehicles. Electric cars and buses are becoming very common in Western countries. In fact all major car companies of the world have electric cars in pipeline. Electric vehicles not only reduce air pollution but also noise pollution since they are extremely silent. For inner cities noise pollution is also a major consideration in vehicular use.

For a fair weather country like India electric motorcycles are a sensible solution.

NARI in early 2000 was the first Institute in the world to develop electric rickshaws. Because of the lack of vision of powers-to-be this innovation did not become popular. Now 17 years later there are lakhs of electric rickshaws all over the country with Chinese motors, batteries and controllers. We lost time and opportunity to develop electric vehicle ecosystem in the country.

TTremendous achievements in battery technologies, motors and controllers have made electric vehicles comparable in range and power to fossil fueled vehicles. In India we need to introduce electric vehicles specially electric motor cycles in a big way.

There is no single solution to reduce air pollution in Indian cities but all those outlined in this article can help to alleviate it. What is really needed is the political will to identify innovative solutions in India and implement them.