The Greenhouse Effect & the Global Warming

Our planet Earth is facing a serious problem called Global Warming; the Earth's surface temperature is getting warmer and warmer, which is changing the Earth's climate everywhere with devastating affects on weather patterns across globe. It has a range of potential ecological, physical and health impacts, including extreme weather events (such as floods, droughts, storms, and heatwaves); melting of the ice caps causing sea-level rise; altered crop growth; and disrupted water systems and others. The climate change that we are witnessing is one of the greatest challenge facing humanity today. This may also put out many species at high risk of extinction, threatening the collapse of marine food chain and ecosystem. Shortage of food and water may trigger massive movements of people leading to migration, conflict and famine. Scientists generally agree that unless we address this problem now the situation will get worse and eventually will threaten the very life on earth. Scientist also generally agree that one major contributor to this global warming is the higher concentration of the greenhouse gas carbon dioxide CO2 in the atmosphere. 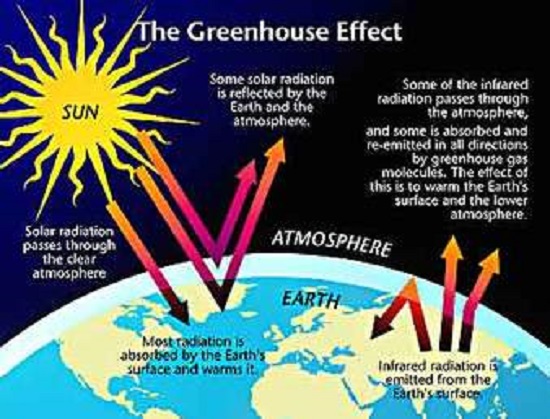 The Greenhouse effect works by preventing absorbed heat from leaving the earth through radiative transfer. Normally, the Earth receives energy from the Sun in the form of ultraviolet, visible, and near-infrared radiation. About 26% of the incoming solar energy is reflected back to space by the atmosphere while about 19% is absorbed by the atmosphere. Most of the remaining 55% energy is absorbed by the surface of the Earth and some are radiated back. Because the Earth's surface is colder than the Sun, it radiates back infrared light at wavelengths that are much longer than the wavelengths that were received. The atmosphere in turn radiates back some of this energy downwards depending on the strength of the greenhouse gases. This leads to a higher equilibrium temperature of the Earth surface than if the atmosphere were absent.

We can think of the atmosphere as a heat-trapping grid surrounding the Earth. Water vapor, Carbon dioxide and other GHG are the solid bars of the grid while non-greenhouse1 gases (nitrogen and oxygen) are the open spaces between the grid bars. When infrared energy hits an open space of the grid, it escapes into outer space and dissipates; but when it hits a solid bar, the bar heats up and reradiates some portion of the energy back toward the Earth, raising its overall temperature. The more GHG molecules there are in the atmosphere, the more wide are the bars of the grid, shrinking the open spaces and making it harder for infrared energy to escape into space. The tighter the grid, the more energy it absorbs, and the hotter the Earth gets.

We need to note that CO2 is not the biggest contributor of the GHG. Water vapor in the form of clouds is the greatest contributor with (32-76%). of these GHG. However, while we humans don't have any control on the natural process of formation of the water vapors (clouds) which are formed based of the surface temperature of the oceans, we humans have control in formation of the next biggest contributor of the GHG, the CO2 which contribute as much as (9-26%) of the GHG. Carbon dioxides also essential for life - animals exhale it, plants absorb and sequester it. There is a natural carbon cycle in the Earth's atmosphere. Carbon is absorbed from the atmosphere when photosynthesizing organisms such as plants, algae, and some kinds of bacteria pull it out of the air and combine it with water to form carbohydrates. It is returned to the atmosphere as CO2 when humans and other animals breathe it out, or when plants die and decompose. For the past thousands of years, this balance of intake and emission has kept the amount of carbon dioxide CO2 in the atmosphere constant. But in modern times, by burning an ever-increasing amount of fossil fuels, we are putting our finger on the scale, tipping the balance toward more CO2 emission. When we mine fossil fuels and burn them for energy, we are taking out carbon that would have normally taken millions and millions of years to reenter the atmosphere and putting it back there all at once. As a result, the amount of carbon dioxide in the atmosphere has been increasing steadily.

The average global temperature and concentrations of carbon dioxide in the atmosphere have fluctuated on a cycle of hundreds of thousands of years as the Earth's position relative to the sun has varied. As a result, the Earth has witnessed various ice ages in the remote past. However, for thousands of years now, emissions of GHGs to the atmosphere have been balanced out by GHGs that are naturally absorbed. As a result, GHG concentrations and Earth's temperature have been fairly stable. This stability has allowed human civilization to develop within a consistent climate.

It has been observed that the concentration of CO2 increase has been occurring mostly during the last 250 years. This concentration has increased from 280 ppm in 1750 to 406 ppm in early 2017. In 1960, the amount of CO2 concentration was 320 ppm. CO2 emissions from fossil fuel use have increased from 2.16 billion tons per year in 1900, to over 34.8 billion tons per year in 2012. As a result, Earth is now 1.3°F warmer than it was in 1900. The year 1750 coincides with the beginning of the Industrial Revolution which was the transition to new manufacturing processes in the period This transition included going from hand production methods to machines, new chemical manufacturing and iron production processes, the increasing use of steam power, the development of machine tools and the rise of the factory system. It is estimated that human activities since the beginning of the Industrial Revolution have produced about 40% increase in the atmospheric concentration of carbon dioxide CO2. Overall, the GHG levels are higher now than in the last 650,000 years.This energy-driven consumption of fossil fuels has led to a rapid increase in CO2 emissions, disrupting the global carbon cycle and leading to a planetary warming impact.

At a global level we see that early industrialization was dominated by the use of solid fuel. Coal-fired power at an industrial-scale was the first to emerge in Europe and North America during the 1700s. It wasn’t until the late 1800s that we begin to see a growth in emissions from oil and gas production. Another century passed before emissions from flaring and cement production began. In the present day, solid and liquid fuel dominate, although contributions from gas production are also notable. Cement and flaring at the global level remain comparably small. In the United States, oil and natural gas supply 66 percent of the energy Americans use today, Even in 2016 while total world energy came from 80% fossil fuels, 10% biofuels, 5% nuclear and 5% renewable (hydro, wind, solar, geothermal), only 18% of that total world energy was in the form of electricity. Most of the other 82% was used for heat and transportation.

Emissions from a number of growing economies have been increasing rapidly over the last few decades. In 2014, a number of low to middle income nations are now within the top global emitters. In fact, China is now the largest emitter, followed by (in order) the US, EU-28, India, Russia, Indonesia, Brazil, Japan, Canada and Mexico. Note that a number of nations that are already top emitters are likely to continue to increase emissions as they undergo development. In 2015 China contributed about 10.6 million kilo tonnes while USA is the second highest contributor (about 5.1 million kilo tonnes). However when these figures are converted to per capita basis, USA is the major contributor with 16.1 per capita tonnes above China with 7.7 per capita tonnes. There has been important discussions and debates on the Global warming and the Greenhouse affect among the various nations of the world. One good news is that, after much debates and discussions, the world has witnessed the historic Paris Climate Agreement that was prepared within the United Nations Framework Convention on Climate Change (UNFCCC) dealing with GHG emissions mitigation, adaptation and finance in December 2015. It was negotiated by representatives of 196 parties of the UNFCCC in Paris and adopted by consensus. As of November 2017, 195 UNFCCC members have signed the agreement, and 174 have become party to it. The Agreement aims to respond to the global climate change threat by keeping a global temperature rise this century well below 2 degrees Celsius above pre-industrial levels and to pursue efforts to limit the temperature increase even further to 1.5 degrees Celsius. In 2016, USA President Barack Obama put the agreement in right perspective when he said, "Evenif wemeet every target ...wewill only gettopart of where we need togo." He also said that "this agreement willhelpdelay oravoid someof theworst consequences of climate change. It will help other nations ratchet down their emissions over time, and set bolder targets astechnology advances,all undera strong systemoftransparency thatallows eachnationtoevaluatethe progress ofall other nations." However, the debate is not over yet.

Based on the recommendations, the Intergovernmental Panel on Climate Change calls for a dramatic shift from fossil fuels, aiming to influence world leaders to take concrete steps. To keep warming below 2°C, according to the new IPCC report, the world will have to cut GHG emissions between 40 and 70 percent by 2050 - and then keep cutting until they're essentially zero by 2100. Coal and natural gas would need to be phased out for electricity use, unless technologies are developed to capture and store the carbon dioxide they emit.

IIt may be noted that at present new technology has been evolved called 'Carbon Capturing and Storage' which has been engineered to capture CO2 from the exhaust gases before these are released to the atmosphere and to store these it in the reservoir permanently. This new technology has the potential of giving a new life to the coal-fired power plants at additional costs. In fact this new technology may be combined with Enhanced Oil Recovery with the CO2 thus captured in some depleted oil fields. At present, this is exactly is being done in USA and Canada with success. There are also more than 20 Carbon Capturing facilities in different parts of the world which are in operation. In coming years, this new technology will get more momentum especially when coal-fired power plants are built nearby depleted oilfields. Thus new technologies will play a important roles in our solution to the problem of Global Warming in the coming years.