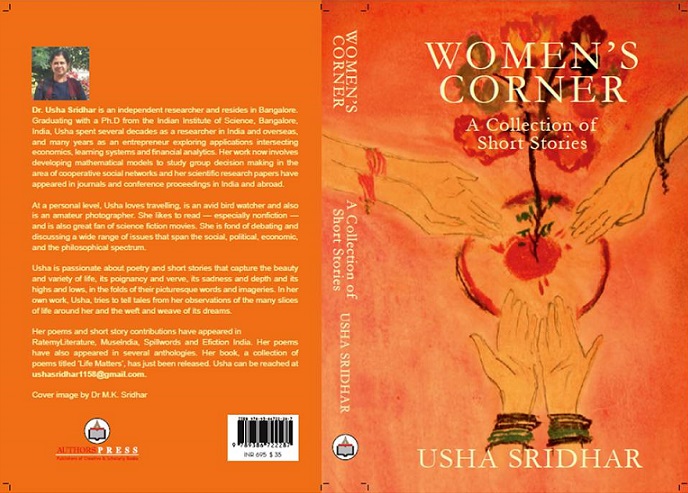 Dr.Usha Sridhar by profession is an independent researcher, an entrepreneur now involved in developing mathematical models to study group decision making in co-operative social networks and a poet and story teller by passion. The book under review is a collection of eight stories, all women-centric subjects as the title aptly suggests.

Feminism in Indian English stories is not a new-fangled concept. Many writers have delved into the literary circuit projecting the social inequality, created a reader-base and made a niche for themselves. Usha says being a woman herself, it would be easier for her to focus on the lives of women and the readers would find this amply convincing once they finish reading these stories.

After a health set-back she quit her mainstream career to follow her heart’s call to become a writer. At a time when more than ever before women’s issues are discussed from all corners, it is heartening that Usha digs deep into the subject and has come out with various issues in their life, how they conduct themselves to come out successful and establish their identity. She says it all with exemplary zeal. The notable aspect in all these stories is that one can see positive vibes emanating through the protagonists’ attitudes towards life and all of them end up tasting success in their lives.

In herown words, “I have endeavoured to capture a few snapshots of how women think, perceive, behave and act in different situations. I’m painfully aware that this is a limited picture – but this book is just a beginning! “ So let’s hope that many such endeavours can be expected from this writer.

Usha’s voice as a feminist, if I can call her such, can be heard loud in her verse, which she has included in her preface to the book:

To be a woman I am indeed proud
over the years, my true identity I have found.
I know I have a long way to go
but I have begun my journey of discovery to grow.
I am now up to any task assigned to me
completing it well I can surely guarantee.
I am in no competition with my male counterparts
I too wish to rise up in my life chart;
so I will revolt against any biased rulings
that goes against my spirit and my being.
So please, don’t be the jury
and curb my voice and liberty;
I will not take it lying down anymore.
My dignity in full, I plan to restore
so that my victory I can ensure.
In return, to you, I wish to assure
I will in situations behave mature
I will act without fear and always be fair
I will discharge my duties, responsibilities with care.

Women by nature are able to undertake multi-tasking as home-makers and professionals and they do this quite naturally and effortlessly. The stories in this collection are varied in themes, situations and the characters chosen are from various stratum of society. The author has taken care in character sketch and has avoided repetitive subjects and she deserves to be lauded for this.

The first story ‘A Rare Retake’ is about Rama, an ambitious career woman, who places her professional life above her personal life for most part of her life, in the course of which she faces lot of problems in both the phases, and at the end when she wanted to make amends, it was too late, but with patience and perseverance she could achieve it with the support of her sympathetic parents. But her son was the silent sufferer as a child who did not get parent’s love and care and made to suffer psychological trauma and societal apathy, which he could not even disclose to his grand-parents, who were caring to the core and everything for him.

The second story ‘Spring In Life’ tells that age is just a number and is not a hurdle for change. Here in this story, Jaya, a home-maker all through her life, discovers what she is capable of and proves her worth in her sixties after her husband’s demise, to the surprise of her sons In spite of being single, she converts her house to paying guest accommodation to working girls and she literally turns into a motherly figure for all those girls. While being independent and is on her own, she helps the deserving girls in all ways possible, enjoying a self-worth. Those in similar situations can take inspiration from the life of this home-maker turned entrepreneur.

In ‘Reverse Swing’, Maya the central character affected by Alzheimers in her old age is being abandoned by her children. She as a mother does everything possible to bring up her children, but the children fail to take care of her when she needs help the most. Of late, we come across these types of ungrateful attitudes towards elders in many families, irrespective of financial standing, educational standards or societal status. Many elderly people suffer silently within the confines of their houses. This is a grave issue which needs to be addressed urgently. Here Usha has rightly dealt with the ugly side of deteriorating family values.

Four women meet during a train journey and exchange views and become good friends. Kavitha, an Economics Professor; Shoba alias Ammani, a columnist and novelist, who fought hard against challenges in life and once settled writes under the pen name Samiksha; Indira from a middle class conservative family, who had high ambitions, but unfortunately had to fight at every stage even to pursue higher studies; Rekha, born female who later realizes that she is a transgender on account of which she faces so much of struggles in spite of which she emerges successful, sets up her own dance troupe and gives performances. This is the background of the story ‘A Train Sojourn’ that gives the readers the trials and tribulations of these women and the positive vibes each one of them spreads. A journey otherwise could have been boring and dull turns into a fulfilling experience to these women, and at the same time they realize that life is an open book of lessons.

The fifth one ‘A Mother’s Remorse’ is the story of Prema, who in spite of having two children of her own, takes to her fold another one, Geetha. It so happens that Geetha outshines her own kids which the mother in her is unable to take in good spirit and she tries to repeal Geetha’s dreams. Paradoxically life has its own ways and lessons and Prema is full of regrets and repentance, but too late as it was only after she loses everything dear to her, she learns a lesson the hard way. The story gives a message to the mothers who are over-possessive, as a result of which they become selfish and narrow-minded.

‘A Somber Silence’, the sixth in this collection depicts the life of a couple happy and contented, but unexpectedly tragedy strikes one of them in their old age. The good thing was that Sashi the surviving partner gets the full support of friends and relatives. This is a heart-warming tale.

The seventh story “A Collective Resolve’ tells the tale of forward thinking youth, a few women bent upon changing the age old customs and practices rigorously followed by the rural population without asking, not even thinking why and what for. With consistent efforts and sincere approach, they are able to see results and improve the life situations and social status of the villagers, upon which they get their due share of support, encouragement and appreciation from the local men folk. These men go the extra mile to spread words of appreciation to these progressive thinking women and their acts far and wide enacting plays in various parts of the country. Deepa, Rahul, Shyam, Smitha and others, as also the people in Nandipura in this story become familiar to the readers after reading this story. A collective resolve can lead to the desired benefits to the entire society is the message being imparted here.

The last story in this collection is ‘A Rainbow Reunion’. This story is unique - telling the experiences of six women who meet after several years and recollect their nostalgic past, precisely their school days. They decide to meet for three days in a resort away from the hustle and bustle of city life and there unfurl the cascading memories of their good old days. Readers can enjoy some lighter moments here and one is sure to hunt their own chest of memories, relate to them and sink into those cozy corners at least momentarily.

Personally I should thank Usha for giving me an opportunity to review this book, wherein she has also acknowledged my encouraging comments on her short stories.