On Dalit as Deva, a la Black is Beautiful 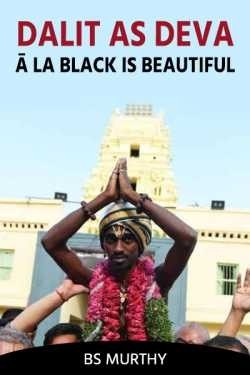 It was in 1932 that Gandhi took up the cudgels for India’s dalits, for long ostracized as untouchables, and as if to make them feel like devas, he rechristened these hapless souls as harijans, children of god. Whereas British Raj’s 1935 India Act clubbed these untouchables under a schedule for political purposes, the sovereign democratic republic of India, under the aegis of Ambedkar, not only adopted them through its 1950 constitution as schedule castes, SCs in popular parlance, but also obligated the state to engage itself in a ‘positive discrimination’ of them for their social emancipation and moral upliftment. Not only that, stringent laws were put in place to deter their traditional oppressors from indulging in insinuations against their caste base to belittle their state-induced social advancement. But before we proceed to prepare a report card on dalit empowerment; we may digress to observe the state of the once-enslaved African Negroes, lately metamorphosed into African Americans, on the white U.S. soil.

Though slavery was abolished in America way back in 1865, the undying discrimination against its ‘free’ Negroes remained such that even Jesse Owens, who having symbolized the U.S. sporting power in the Berlin Olympics of 1938, had to keep holding the bias end of its racial stick. Though the innate physical strength of Negro biology continued to yield sporting returns in their scores of Olympic medals that buttressed the American athletic glory, their racial plight remained the same that was till Martin Luther King Jr. came up with that historic ‘I Have a Dream’ speech in 1963, as a consequence of which, the ‘Black is Beautiful’ movement, meant to fight for equal rights for African Americans and a positive perception about them, took wings. And it was the ensuing self-belief of the African Americans that slowly but steadily produced Black Stars in every human endeavor to name, the acme being ‘colored’ Barack Obama’s ascendancy to the U.S. presidency. Well, all this without any constitutional provisions for positive discrimination towards them, which proves that sense of self-belief is the elixir of upliftment, and what is more, their former oppressors, who pride themselves in self-actualization, have begun to take this newfound Black Confidence in their stride, maybe with a pinch of salt.

But what about the state of the dalit lot in India; no denying the reservation regimen had ensured their preferential presence as patronized SCs in legislative portals, administrative corridors, educational institutions etc. with no let or hindrance. Besides, what with the dynamics of democracy enabling them to acquire a crucial political clout, discarding Gandhi’s harijan sobriquet, perceived as patronizing, they assumed the assertive dalit identity, yet opting to remain as downtrodden in the constitutional scheme of things. Nonetheless, as the upper-caste prejudices persisted, their atrocities against these continued, more so in its hinterland, though on a reduced scale, and as if on the rebound, the latter for their part tended to falsely implicate the former under the stringent Schedule Castes and Schedule Tribes (Prevention of Atrocities) Act 1989 that mandates the arrest of the alleged offenders forthwith. Given its unabated abuse over the years, mainly by the SCs, only recently the Supreme Court of India sought to place a filter on the provision of immediate arrest by precluding it with a preliminary investigation into the allegation. But as the activist ‘dalit’ hell broke loose thereafter, in order to placate this critical voter base, politicians, of all hues and cries, came together in the parliament to restore the unfair old order. While this recent happenstance pictures the coming of age of the dalit political clout, the fruits of positive discrimination in the form of their social emancipation and moral upliftment are far from being ripened, but why?

And the upper castes, for their part, seeing their untouchables becoming the spoiled children of a patronizing state, to whose exchequer, by and large, they toil to contribute, have come to resent the latter’s socio-political rise in the very arena that was their wont to dominate all along. While this new savarna grievance helped buttress the old upper castes’ hostility towards the downtrodden of yore, the latter, who needed an enabling environment for pursuing their rightful quest to uplift themselves, had to contend with this unintended, yet understandable, consequence of the state’s positive discrimination. Thus, as the manner of dalit empowerment pushed India into a vortex of social unease, albeit of a varied kind, to its impediment, a course correction to approach the set goalpost is imperative, which is the objective of this piece.

Though the dalit tag affords political clout to its desperate classes as a whole, it had failed to buttress the self-worth of its disparate caste groups for in the Indian cultural calculus, caste is intrinsic to the social-worth of its members. Thus, it is imperative to cast a sense of caste-worth in the dalit fold in the ‘Black is Beautiful’ mould for the collective moral upliftment of its member castes. But self-belief being the by-product of the zeal to strive and not a corollary of plucking low-hanging fruits, the system of reservations has effectually given a go-by to the zeal to excel, a vital ingredient of personality development. It is thus, the doles of the state inadvertently, but effectually, came to harm the dalit cause in the long run, and what’s worse, even the genuine dalit achievements entail a diminished stature for they come under the shadows set by low performance bars, thereby precluding their due social recognition at large. The way out, while yet retaining their quotas is for the dalits to volunteer to get their reservation bar raised to touch the prevailing positions.

“What's in a name? That which we call a rose
By any other name would smell as sweet,”
said Shakespeare but what he left unsaid was
‘And alike it makes any other name as rosy.’

Likewise, had the lexicologists named the Lord in the skies as Sod and an annoying guy on planet earth as God, the former name would’ve acquired divine connotations and the latter, a taboo word. Thus, it may be appreciated that a name is ‘worth neutral’ in its essence but becomes exalted or gets diminished depending on the object it’s associated with, which, in turn, is the subject of our subjective attributions. And the same applies to the caste names that came to represent the ascending steps of the Hindu social ladder for the demeaned Mala indeed sounds better than the exulted Brahmin, the denigrated Madiga is easy on the ear than the extolled Maratha, the dismissed Chamar is more sonorous than the domineering Choudhary et al. Hence, for an Indian variant of Black is Beautiful movement, it is essential for the members of the depressed castes to begin taking pride in their respective castes and suffix their caste name to their social name with the same sense of pride as Yadavs, Reddys etc resort to. Indeed, as Manda Krishna Madiga of Madiga Reservation Porata Samithi , so to say, has given the lead in this direction, the other castes in the dalit fold should follow suit wearing their caste worth on their sleeves.

And come to think of it, had Gandhi anointed Ambedkar the dalit as the first prime minister of independent India that is the modern version of the ancient Bharat, its current story would have been a vastly different tale to tell. But possibly, the crusader against untouchability was content playing patron to his harijans and thus could not conceive the idea of Ambedkar of their ilk occupying the new nation’s exalted chair, and what’s worse, true to his autocratic character, he placed the woolly Nehru in it though his entire party wanted the pragmatic Patel to grace it. And the rest is an unsavory history for Nehru turned Bharat into a Blunderland, and the dalits for their part, had reduced Ambedkar, arguably the most robust intellectual of our times, into their sectarian icon, thereby diminishing his true nationalist stature.

Maybe, this is an opportune dalit moment for God, who could have felt slighted at their discarding Gandhi’s harijan tag but realizing at long last that they were justified in doing so, in the spirit of let bygones be bygones, had ushered in Narendra Modi to embark upon changing India’s outlook towards itself, to achieve which, he may cease his vanchit, shoshit, peedit rhetoric and instead exhort Malas, Madigas, Chamars et al to feel good about themselves. So, now it’s for the dalits to become devas, and strangely though, they can draw inspiration from the very Brahmins whom they perceive as the source of their socio-economic plight, for the so-called dwijas, the twice born, owing to their single-minded focus on acquiring knowledge above all else, could affirm ‘Brahmano mama devata’, Brahmins are Angels. So, could Dalits be Devas of a New India.