A Rhizome You All Know 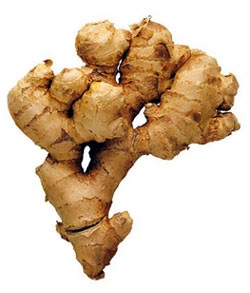 Did you know that the common ginger, often referred to as a “root” is not really a root at all? It is actually a “rhizome”, which means, a stem that grows underground and bears both roots and shoots. Zingiber officinale is the scientific name for ginger. The English word ‘ginger’, the French ‘gingembre’ and the Italian ‘zenzero’ - all owe their origin to the Latin word “Zingiber’. The Latin word, in its turn goes back to the Prakrit word “singabera” and the Sanskrit word “shringavera” which means, “shaped like a deer’s antler”.

Ginger is native to southern Asia. India and China are among the largest producers in the world. But now ginger is also cultivated in most tropical and subtropical countries worldwide. People have used it for centuries in cooking and as a medicine. In fact, it is believed to be one of the oldest spices used by man. You might be surprised to know that people have written about ginger in early Greek and Roman literature. It is also mentioned in Sanskrit and Chinese texts. There is an ancient Sanskrit saying about ginger, “Adrakam sarva kandanaam”, which means, “Every good quality is found in the ginger”.

Raw ginger has a refreshing smell and a pungent taste that many people like very much. This pungency is caused by a resin which contains a special kind of hydroxyaryl compound. People discovered the medicinal properties of ginger from very early times. They used it as an herbal remedy to treat a variety of problems. The ancient Greeks ate ginger wrapped in bread to prevent nausea after a lavish feast. Chinese sailors chewed ginger to prevent sea-sickness. People the world over have used it for treating heartburn, vomiting, stomach cramps, loss of appetite and as a digestive aid. Ginger is also excellent for treating cold, cough and respiratory problems. It is even used to relieve toothache.

Recent research tells us that ginger is also an anti-oxidant. It is used as a stimulant, a digestive and a cardio-tonic. In fact, ginger is nearly as versatile as garlic in its health benefits. Like garlic, ginger too is believed to lower blood cholesterol.

Ginger is extensively used as an ingredient in Asian cooking. Those of you who enjoy Indian food might know that ginger forms the basis of the North Indian curry paste along with onion and garlic. The three are fried together before adding to a dish. Meat, chicken and fish are often marinated in a paste of raw ginger and garlic before cooking. Ginger paste is added to creamy coconut milk in several south Indian dishes. Ginger tea is prepared by adding finely sliced or grated ginger to the brew when boiling it. In Chinese cookery, fresh ginger is used both boiled and fried. Food that needs a long simmering time is often flavored with slices of ginger, because the slices release their flavor quite slowly. Many like the taste of raw ginger and enjoy eating finely shredded ginger with soaked grams. It is said to be healthy as well. Why not try it some time?