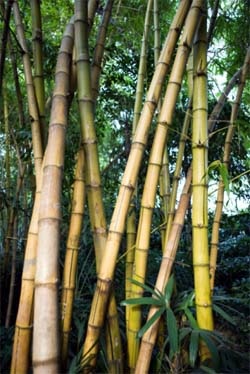 Did you know that the bamboo is actually a giant, fast-growing grass that has a woody stem? It belongs to the Poaceae family. Bamboos grow in diverse climates, from mountains to tropical regions and are said to have more than a thousand species. The heaviest concentration is found in East and South-East Asia and the islands of the Indian and Pacific Oceans. Another kind of bamboo called ‘Arundinaria’ grows in the southern United States along riverbanks and marshy areas.

The hollow stems of the bamboo that you see above the ground are called ‘culms’. They grow from a thick underground stem called the ‘rhizome’. The new bamboo shoots sprout from the parent plant's rhizomes. The new shoot grows very fast and reaches its full height within just a month or two. Once it has matured, a bamboo Culm remains exactly the same size for the rest of its life, not growing even an inch higher or wider.

Some bamboos are so small that their culms are only about 4 to 6 inches long. But giant bamboos have culms that can be up to 130 feet long. The culms of some Japanese bamboo species grow as fast as 1 foot a day and produce flowers and seeds quite soon. While there are others that have flowers after 12 to 120 years of growing and produce flowers just once during their lifetime.

The bamboo is very flexible despite its length. It may sway dangerously in strong winds but rarely breaks. This flexibility is because of its hollow culms and nodes. Its Culm, branches and leaves stay green throughout the bamboo's life.
How many uses of this giant grass can you think of?
Did you know that the needle in Alexander Graham Bell’s first phonograph was made of bamboo? And that Thomas Edison used bamboo as filaments in the world’s first light bulb in 1882?

Bamboos are used in various ways, especially in Asia. Bamboo seeds and young shoots are used in many Chinese cuisines. The leaves are used as fodder for animals. The pulped fibers of bamboos (such as Dendrocalamus strictus and Bambusa arundinacea) are used for making fine quality paper. The stems are used for making planks needed for making rafts and houses. Scaffoldings made of large and small bamboos as well as ladders at building-construction sites are a common sight. The bamboo is said to be twice as stable as oak and harder than walnut and teak. Bamboo stems are also used in making furniture, walking sticks, fishing poles, garden stakes and many other things used in our daily life. And of course you see them in ornamental landscape gardens. I’m sure you can think of many more examples.

It might interest you to know that although the life span of a single bamboo is not very long, the bamboo grove stands forever. This is because the fully grown bamboo sends the nutrients prepared by its leaves down the Culm right down to its rhizomes. New bamboo shoots are produced every year from these rhizomes and ensures the survival of the bamboo grove. Next to China, India has the largest bamboo forests.