Cardamom - The Queen of Spices 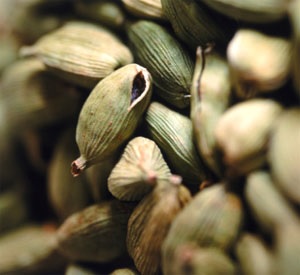 Cardamom, often dubbed as the “grains of paradise” is a pungent, aromatic herb which is very versatile. It is one of the highest priced herbs in the world and is widely grown in southern India. Popularly known as elaichi, cardamom is a tropical fruit of the ginger family known as Elettaria Cardamomum.

Cardamom is broadly grouped into two categories, namely small cardamom (chhota elaichi) or true cardamom and large cardamom (bara elaichi). The former is commercially far more important and also far more popular than the latter. In fact it constitutes one of the most important and valued spices of the world. It is also the second most important national spice of India (the first being black pepper), known as the “Queen of Spices”.

Cardamom has a history as old as the human race. It is mentioned in ancient Vedic texts. It is mentioned by Theophrastus in the fourth century BC and later by Dioscorides in 5th century BC. Cardamom grew in the gardens of the King of Babylon in 720 BC. It was used as early as 4th century BC by Indian Ayurvedic experts and by ancient Greeks and Romans. Cardamom is believed to be a native of India. It was probably imported into Europe in 1214 AD. By 1000 AD it was an article of trade from India westwards. The Chinese mandarins are said to have chewed the pods when they were granted an audience by the Emperor to ensure that their breath stayed fragrant when they stood before the ‘Son of Heaven’.

Whole cardamom pods come from India while the decorticated seeds are imported from Guatemala. Indian cardamom is considered to be of premium quality. The Malabar type, rounded in shape, has a pleasantly mellow flavor generally regarded as superior. The Mysore type, ribbed and three cornered, has a slightly harsher flavor but retains its original green color.

Indian cardamom is known worldwide for its quality. India exports about 90% of cardamom to the other countries of the world and earns substantial foreign exchange on this account. Indian cardamom is valued all over the world for its superior quality, unique flavor, rich content of oil, attractive shape and color.

Enclosed in the fruit pods are tiny, brown aromatic seeds which are slightly pungent in taste. Cardamom pods are generally green but are available also in bleached white pod form. Cardamom is the third most expensive spice in the world as each seed must be handpicked.

Cardamom is a spice that is very versatile – it can be used in beverages, desserts and main courses, in sweet and savory dishes as well as in fruit based dishes. It is used in a variety of cuisines today, primarily in and around the Indian subcontinent and in Scandinavia. It is also used in Danish pastries, Saudi Arabia and North Africa.

In Indian cooking cardamom forms one of the main ingredients of garam masala, a combination spice for many vegetarian and non vegetarian dishes. It is also an important ingredient in curry powder which is widely used in Indian cooking. In Kerala the Malayalees use cardamom quite liberally in some of the state’s well-known culinary creations, for example the traditional Kerala stew is redolent with cardamom.

Whole green cardamom pods are as esteemed as the seeds they contain – many pulaos, curries and hot dishes call for cardamom to be added whole. It slowly infuses the dish with its essence and the shell disintegrates as it cools. Cardamom is often used to provide aroma to biryanis, pulaos and kebabs.

Cardamom milk is very popular in the plains of North India and in Bengal. Cardamom is also used to flavor tea and coffee and also pastries, breads, fruits and pickles. The Europeans are not particularly enamored by cardamom and only the Scandinavians use it in some dishes where it is used more extensively than cinnamon. In Sweden and Finland cardamom is widely used in confectionery. The Americans use it in baked foods and the Russians in cakes and confectionery. The Arabs love to marry it with coffee. They also use it to flavor meat dishes and sweetmeats. Connoisseurs of Masala tea in the Indian subcontinent would not exchange cardamom for any other spice in the brew.

Tea and coffee made with cardamom are pleasantly aromatic and refreshing. In India we also tend to associate cardamom with the paan (betel leaf). Launga elaichi ka beeda is a part of folklore and also of Hindi film songs.

Throughout the Arab world cardamom is one of the most popular spices with cardamom coffee being a symbol of hospitality and prestige.

This versatile spice has several medicinal and therapeutic uses. It has excellent food value. It is low in fat and high in proteins and vitamins A,B and C. The seeds contain 10% of volatile oil.

Ancient Egyptians chewed cardamom to whiten their teeth and simultaneously sweeten their breath. As early as 4th century BC, Indian Ayurvedic medical texts used the spice to remove fat and as a cure for urinary and skin complaints. Cardamom was used in perfumes by ancient Greeks and Romans and also recommended by Apicius, a famous Roman epicure to counteract over- indulgence in drinking alcohol. During the days of Charaka and Susruta the noted physicians of the 1st and 2nd centuries AD, cardamom was acclaimed as a cure for many diseases.

Today the therapeutic value of this spice is widely recognized and Ayurvedic physicians use it for the treatment of various diseases. It is used as an adjunct to carminative drugs and is official in the British and US pharmacopoeias.
In Kerala’s Malabar region the elaichi, ila as it is called in Sanskrit has long been famous for its medicinal properties. Ayurvedic texts mention it as a powerful carminative and digestive, so it is often chewed after meals. It is also a delicate herb that improves appetite. Cardamom seeds are the basis of medicinal preparations for indigestion and flatulence. It possesses carminative property. It helps subside the air and water elements in the body. It relieves gas and heartburn and is useful for nausea and vomiting.

Cardamom also helps increase the secretion and discharge of urine. It is very useful in treating diseases like gonorrhea, cystitis, nephritis and other genito urinary disorders.

Cardamom is believed to be a sex stimulating food. Its use has been found beneficial in the treatment of sexual dysfunctions like impotence and premature ejaculation. The spice is also a mood elevator and a decoction prepared from it has been found valuable in overcoming depression.

It is also useful for treating hiccups and found beneficial in the treatment of oral disorders like pharangytis, sore throat and hoarseness. It also brings relief from headache. Cardamom has also been used as an insect repellant.

In Arab culture serving cardamom to a guest was a sign of hospitality. It was a custom at the royal courts in Delhi and Agra to offer a cardamom to a guest. The rule was to stretch out one’s palm with a few pods on it and this offering had to be accepted in a pinch between two fingers.

Cardamom oil is an essential factor in food items and in the preparation of certain medicines. It is used in both pharmacy and perfumery, for flavoring liquors and bitters, and in the preparation of tincture. Cardamom oil is also used in perfumes and as a stimulant. Cardamom was a favored ingredient in love potions. The aphrodisiac properties of cardamom are extolled in the Arabian Nights.

he Nawabs of Awadh, whose courts were a byword for gracious living, chewed green cardamom seeds covered in silver and gold leaves that had been dipped in tobacco-laced rose water for their daily nicotine fix.

For the noblemen of the courts of Delhi and Agra, jewelers used to craft dainty miniature caskets and barrels in silver and gold to serve as cardamom containers.

According to experts, cardamom has been under- used in Indian cooking because its high cost discourages its liberal use. There is also the unfortunate question of quality. Very often paanwaris, halwais and professional cooks cut costs by using sub standard cardamom – kani elaichi – with only the shell and no seeds sans taste and scent.

All this notwithstanding, cardamom is a very versatile spice having a wide range of culinary and therapeutic uses. It is an indispensable part of our daily cooking and most Indian households stock cardamom, rightly called the Queen of Spices.