Looking Back at Kartthika maaha ...

Karthika is truly, a magical month!—magical for more than one reason. Incidentally, it is the eighth month in our national calendar; correspondingly, it falls in the months of October/November of Gregorian calendar. It is by this month that the rainy season usually comes to an end … and here begins the winter as the temperatures take a dip across the country. People, who had been hitherto bolted inside their dwellings by the hammering rains for almost two-three months, start coming out on to roads—indeed it is in Karthika that human activity reemerges in the country side…

The sky becomes clear and the moon starts shining brightly.… there is indeed a certain pleasant hue in those bright moon rays of Karthika … their spread over the lush green canopies that are standing still in the countryside is a treat to watch as the green leaves sparkle with silvery glow. The milky-white moonlight lain on the floor, in between the trees, makes one wonder if a painter had stroked it care-freely with his brush dipped in milk. Moon-lit nights of Karthika with Pedon ki shaakhon pe soyi soyi chaandni (slumbering moon on the branches of trees) are unique—a dip in the night temperatures coupled with a nip in the air that together makes them pleasant … cheering the young and the old alike.

Religiously too, it is a very sacred month for Hindus for more than one reason: one, it is believed that Lord Vishnu who goes to sleep on Ashadha suddha ekadashi wakes up on Karthika suddha ekadashi; two, it is on Karthika pournima that Lord Shiva is said to have killed Tripurasura, a demon, to restore peace; three, it is believed that in Karthika, Ganga, the goddess of river Ganges, enters into all rivers making all of them as pious as Ganga itself, etc.

That being the belief, every morning of the Karthika, devotees rush to take a dip in the flowing waters of the nearby river or a stream, canal, or as a last resort in their village tanks well before the Sun rises, and visit temples, mostly Shivalayas to pray. During Karthika month, women folk too get up early in the morning and bathing with cold water … draping the water-oozing hair in a dry towel, rush to the holy Tulasi (basil) shrub in the backyard, light a clay lamp at its base and in its irradiance, pray to the holy shrub in silence or by singing songs, or by chanting mantras, as one feels at ease. Kids too, getting up quite early and sitting in the deck under the eaves, particularly boys … shivering in the morning chill, watch the ritual of their mothers decorating the surroundings of the Tulasi with muggu (rangoli)and adorning it with colourful petals of different flowers––of course, at times being helped by girls in all these preliminaries, of course, quite enthusiastically and at times in their over indulgence adding more work to mothers than any help––and praying Tulasi by circumambulating around it in that morning mist while the young girls follow them behind. It is quite a pageant to behold for the rest of their life!

In the evenings, people adorn their homes, even the humblest of homes, by lighting small clay lamps on either side of the entrance to their compound … to dispel darkness and perhaps also to aid people walking through the just hardening muddy lanes and by-lanes that were till yesterday battered by the incessant rains and are still dotted with cesspools and slushy spots. Lighting a lamp is indeed an inextricable part of Hindu sensibility—they treat lamp as “Suryamsa sambhavo deepah”, an aspect of the Sun. Thus, from birth to death, perhaps even beyond, lighting of a lamp accompanies virtually all-important activities of an individual’s life. Karthika is, perhaps, a mere reminder of this Hindu belief that describes lamp as Amritamaya (full of nectar).

In Karthika evenings, some people also perform Akasa Deeparadhana. It calls for the erection of a tall pole—usually by tying two to three long bamboos one over the top end of the other––at the entrance of a house. A pulley is hung at its top. Through the pulley, a rope is run, on one end of which a brass dome is tied. Every evening of Karthika month, a clay lamp is lit and placing it in the brass dome is pulled up while the gathering chants …Deepam jyothi parabramham / Deepam sarva tamopaham / Deepena saadhyathe sarvam / Sandhya deepam namosthuthe … and is left to hang at the top end of the pole for the whole night. As the brass dome has perforations all around, of course, from a little above the base, it not only guards the burning wick from the winds but also allows light to radiate. In those days, when electricity poles were still to dot the village lanes, these akasa deepalu (sky-lamps) were a thrill to watch, particularly for us, kids. Indeed every evening, we used to storm the house of a teacher in the Shivalayam veedhi, in whose front yard akasa deepam was hoisted, simply to enjoy the thrill of watching it being pulled up the tall pole, craning our necks farther and farther as it climbed up and up and blinked in pride from that towering height

Besides the religious purport, there appears to be an element of social purpose behind these akasa deepalu. With the ceasing of rainy season, as human activity picks up in the villages, people start moving in between villages. In those days, there were hardly any roads, as we understand them to be today, between the villages. They were all mere mud trails formed under the wheels of bullock carts or foot prints of travellers. And as these trails get evened out under the rains, it becomes difficult for travellers between the villages to trace the route rightly, till at least fresh trails are formed. And in the nights, it becomes all the more difficult to trace one’s winding path through the undergrowth. That aside, with the onset of Karthika, days suddenly start winding up early as nights become long. During this transition, travellers often get caught in the sudden creeping in of darkness, making their travel back home more challenging. It is perhaps to function as pole stars in such trying circumstances and facilitate locating a village from a distance by the travellers that these akasa deepalu, perhaps, came into vogue.

Incidentally, dwellings of the past, particularly in the villages, are invariably known to have pial on either side of the entrance gate with a roof over them … which are essentially meant for catering to the needs of such travellers, for whom it was in order to sleep on them for the night and walk away early in the morning to their respective villages. And interestingly, on either side of the entrance door, there used to be a well-designed pigeon hole-like opening in the wall in which a housewife usually puts a clay lamp in the night to lighten the path. Such was the community consciousness in those days! 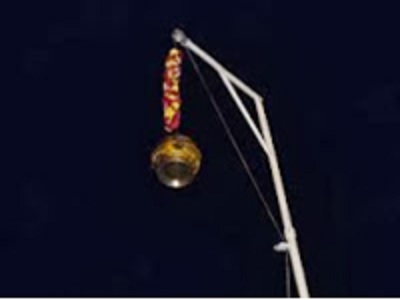 Another interesting societal activity during Karthika month is Karthika Vana Samaradhana or simply called Vanabhojanalu—offering a collective prayer to the gods besides enjoying a community feast in a garden. Elite gatherings are also known to perform Satyanaravana vratam as a part of Vana Samaradhana. It is always a collective affair of a village — money is collected from the participating families @ ‘x’ for members to procure the necessary groceries etc., for the feast. It is preferably arranged on Karthika suddha ekadasi. Food is cooked in the garden by the hired chefs. Before the feast, everyone assembles under a usiri — Indian gooseberry (Phyllanthus emblica) — tree and offers prayers to it. Then, spreading mat rolls under the trees, women and children are served the feast first. In the days of no TV and other social entertainment, Vana Samaradhana was a great event for the villagers, particularly for women, who rarely had an opportunity to walk beyond their courtyards, that too in broad day light, and enjoy the nature in the company of their near and dear. In those days, even we, the kids, used to look forward to vanabhojanalu for it offered lots of fun and frolic, that too, more in that sylvan surroundings…...

That takes me back to my very home where my mother used to light a modest earthen lamp every day at twilight … and as the fluttering wavy cotton wicks soaked in vegetable oil… emitted light … as it spread fast across … the ill-lit corners got lightened up … while the well-lit corners till then suddenly becoming ill-lit … amidst this interplay of darkness pregnant with mysteries disappearing and reappearing… a rare sense of comfort used to dawn on us… as a child I could see that comfort glow in my mother’s face as she stood motionless for a minute before the lamp with her palms cemented together just to namaskar the jyothi that tapered into space … perhaps transcending itself into darkness—of course, no mantras or any such sounds… mere communion in silence—silence that transcends to gods like the tapering jyothi transcends into darkness and beyond it into gods … I don’t know what it really was and is but whenever I recall my mother rushing every evening, Karthika or no Karthika, at that dotted time dropping whatever work that was on hand and lighting the lamp in the devudi guoodu (the seat of god) , with devotion and saluting it with reverence, my heart sways in joy.

All those days of clay lamps, akasa deepalu, vana samaradhanalu … simple pleasures of innocent days … have all gone… and fluorescent lamps, neon lamps, sodium lamps have come in … spearing one’s eyes with an insolent aggressiveness … proclaiming, of course, progress… but the paradox of light gifting blindness… a rare insight into the excesses of the current era and the forgotten beauty of darkness… beauty of the shadow of the moon in that splashing gentle waves of sprawling tank… the sonorous music that the leaves of the giant fig tree on its bund played out … all have become events of past … memories of today … Yet as a poet mused: “One is always at home in one’s past” … at the slightest provocation, I tend to slip into that past—the sweet past of the childhood days …..a weakness, of course!