Apple that changed the World of Science 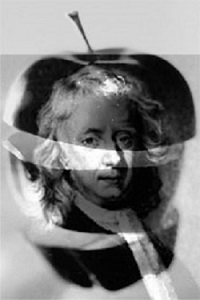 It was a late afternoon in 1666, young Issac Newton, a book under has arms strolled into an orchard in the heart of England. He sat beneath a tree and the most famous apple in history, fell setting in motion a chair of events that would change the world of science for ever.

Newton developed the theory of gravity as a result of that apple. It just so happened that on that very day Newton was struggling with the problem of what it was that kept the moon in its orbit around the earth and the planets in their course around the sun. There was definitely some strange attraction between objects which was invisible to the eye but must exist. However, Newton wondered, how could the planets stay orbiting around the sun, and the moon orbiting around the earth? There were no strange attractions holding the earth and the moon together so how could these things happen unless some unknown, unseen force was at work? When the apple fell, Newton knew that the apple has been pulled to the earth by the same invisible force that kept the planets and moon in then orbits – the force of gravity. 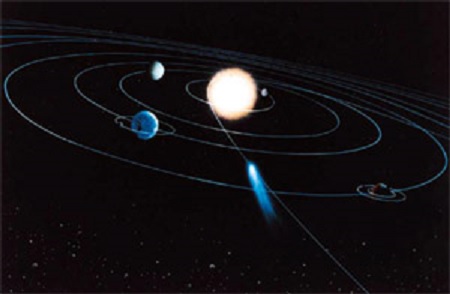 But why did the planets not crash into the sun and the moon smash into the earth in the same way that the apple had crashed to the ground.

Newton struggled with this problem for days. He remembered a game he played at school. To win he had to whirl a pail of water around his head without spilling a drop of water. He was astonished how the water always stayed in the pail as it swung around. Suddenly he realized that there must be another force that had the effect of pushing on the planets and was equal to the pull of the sun. This pushing force was the force that kept the water in the pail as it was spun around. He called this force the centrifugal force and it only came about when one object spun around another and moved fast enough.

He wrote out mathematical formula to see if his idea could work. It worked he realized that the force of gravity must get weaker as the distance between the objects increases, using the advanced mathematics - the calculus, he discovered the inverse square law.

After 20 years of the fall of apple, Newton completed his famous book ‘Principia’. This was the pinnacle of scientific achievement. In addition to gravity and the centrifugal force the book contained Newton’s three laws of motion.

The first is the concept of inertia i.e. the tendency for all objects to resist the change of movement. In order to move an object, force must be applied to overcome its inertia. ‘’Inertia’’ is used to describe a lazy person. In case the object is moving in a straight line, it will continue to do so, unless affected by an outside force. However practical life force of friction or wind resistance slows down and finally stops the motion.

Newton’s second law of motion was that the force applied to the object equals the mass of the object multiplied by the acceleration with which it will move. The third law of motion is that every action has its equal and opposite reaction.

Newton’s work has become the foundation for modern science. His discovery plays a part in almost every modern construction bridges, ships, railways to formula one racing cars, towering sky scrapers to rockets sent in space.

Newton found reasons and explanations where only suggestion and ignorance had reigned. However, Newton has very humbly accepted that he had been picking the pebbles on the sea shore like a child. He had not entered into the entire ocean of knowledge.