Now to speak of a plant that grows in the desert. The most important one is cactus.

The name "cactus" originally belonged to a prickly plant found in Italy called Spanish artichoke or Cynara cardunculus. But now we know that every plant with prickles is not necessarily a cactus. Cactus grows in hot, dry desert country, where it hardly ever rains. You find many kinds of cactus in North and South America, and especially in Mexico. And of course wherever there are deserts, including India. A cactus doesn’t have leaves. It stores up water inside its thick skin. A cactus plant can be very tall or really tiny.

Did you know that there are 1,650 different kinds of cacti? 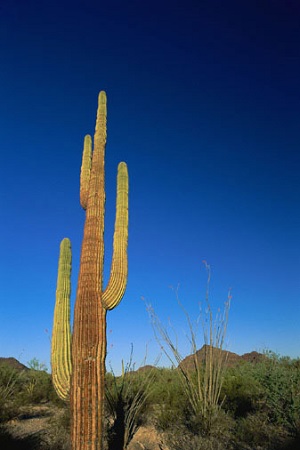 Another kind is called the old man cactus because of its woolly white beard. The prickly pear cactus has a fruit that can be eaten. Indian fig is also a kind of prickly pear. People living in warm countries grow quite a lot of it. They use the seeds to make oil. You sometimes find prickly pears in the market and fruit stands. People also eat Cholla cactus. In fact, most cactus fruits look like berries and are usually edible. You can make sugary candy with another kind. Barrel cactus really looks like a barrel and has a juicy pulp, rather like a water melon. Travellers stranded in the desert often eat it. In the olden days the watery juice inside a barrel cactus often saved people’s lives.

Most cacti bloom in the spring for a very short period, sometimes for only a few hours.

One of the most famous of the cacti is the night-blooming cereus called C. grandiflora. Its sweet smelling flowers bloom after sunset and last only a single night. In many places the flowering of this cactus is celebrated with festivals. Many people grow cactus just because they look pretty and are quite different from ordinary plants. The cactus flowers are beautiful, appearing in shades of red, yellow, orange, purple and pink. Some cacti, such as the Christmas Cactus (Zygocactus) and the orchid cactus (Epiphyllum), are specially cultivated for their beautiful flowers and are sold in the market for a lot of money.

Cactus is used for many things. People plant them round their houses to make a thorny fence. Those living in deserts sometimes use dried up cacti as firewood. Some are used for making medicines and simple home remedies or used as stock feed. You can have your own cactus garden if you want to. Plant them in small pots or in a flower box and keep them in a sunny spot. It does not matter if you forget to water them as they need very little water to stay alive. In fact, they are the easiest plants in the world to take care of.  Just remember not to touch them if you don’t want to get pricked!