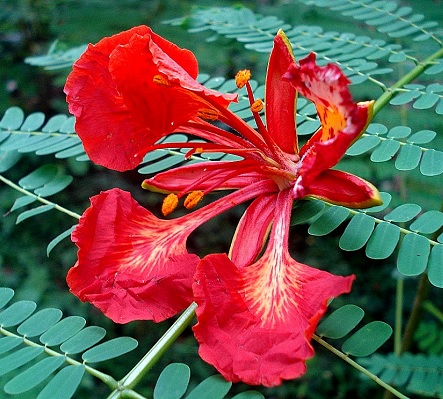 Come April and you see the gorgeous Gulmohur trees in full bloom, lighting up the road sides, parks and other places with their huge clusters of dazzling red and yellow flowers which continue to bloom right up to August. Even where it stands alone it is a wonderful sight. Did you know that it has been described as the “most colorful tree in the world”? The scientific name of the Gulmohur is Delonix regia (also known as Caesalpinia regia or Poinciana regia) and it belongs to the Fabaceae or the pea family. This tree is known by many other names, such as royal poinciana, flamboyant, flame tree, peacock tree and so on.

The Gulmohur is a deciduous tree that grows up to a height of 25 to 40 feet. The flowers are large and striking. They have four spoon-shaped spreading orange-red petals which are about 3 inches long and one upright slightly larger petal (known as the standard) which is marked with yellow and white. The flowers are followed by brown flattened pods containing up to 40 seeds. In the Caribbean Islands people use the pods for fuel. And they call the pods "woman's tongue" because of the rattling noise they make when the wind blows them! Some others call them “shack-shack” because of the sound they make when shaken. The leaves, lacy and fern-like, have many pairs of divided leaflets and have a feathery look. They are of an attractive, light green color that complements the brightness of the flowers perfectly. In places that are particularly dry it sheds its leaves during the drought but in other areas it is virtually evergreen. That is why it has been described as a semi-evergreen tree.

Although the tree originated in Madagascar it is now grown extensively all over the world in countries that enjoy tropical or near-tropical climate. It can also tolerate drought and salty environment and can therefore be cultivated near the coasts, though not along the beach itself. It is widely grown as an ornamental tree and because of the shade it provides. It might interest you to know that in Australia it is considered “a weed” because its dense shade and root system prevent the growth of other plants below it.

There are many legends about the different names of the Gulmohur. Some claim that it is known as ‘gulmohur’ in India because its bright red color reminds one of the rose (gul) and the leaf spread is rather like the spreading feathers of a peacock (mor). The Poinciana is the national flower of St. Kitts and Nevis. It was named after Monsieur de Poincy, the first French Governor of St. Kitts because it was he who first introduced the tree in that region. In Spain the tree is called Arbol de Fuego which means “tree of fire”. In Costa Rica and some other places in Central America it is known as “Malinche” after a beautiful maid of the same name. When Costa Rica was attacked by a stronger country the commandant is said to have fallen in love with the exquisite Malinche who persuaded him to leave her country and people alone. The people of Miami (Florida) love the tree so much that they have an annual festival to celebrate its flowering.

Gulmohur wood is white and soft and is easy to work with. But it is seldom used for making things because it lacks durability. If a tree dies and dries up people use it as firewood. But even then the Gulmohur does something really important - it adds beauty and elegance to the world we live in.

Can YOU think of a new way to celebrate the flamboyant Gulmohur?