The Humble Papaya: Fruit of the Angels 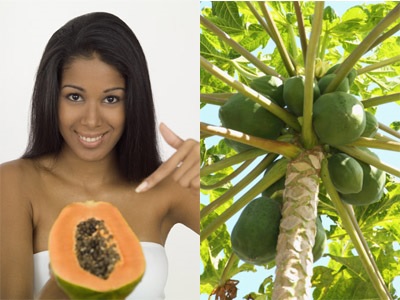 The humble papaya (Botanical name: Carica Papaya) is a storehouse of vitamins and nutrients. Native to Central America, it was introduced into India by the Dutch sometime in the 16th century. From here it spread to all the South Asian countries. Papaya is now grown widely in various parts of the tropical world, including India, Australia, the Phillipines and South Africa.

A tropical fruit with a sweet taste, it is grown commercially in tropical areas. Brazil, Chile, Indonesia, India and Mexico are the leading producers of this fruit.

The papaya is invaluable as a health tonic as it contains all the principal constituents of food. It is rich in vitamins A and C and also contains ample amounts of proteins, minerals, fibre and carbohydrates. Besides, it is low in calorific value and makes for a healthy breakfast. 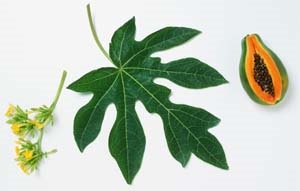 As a source of beta carotene which is a precursor of vitamin A, papaya is unrivalled by any other fruit except perhaps the mango. One half of a papaya has 59 calories, little to no fact, one gram of fibre and nearly a day’s worth of vitamin C and beta carotene, as well as a fair amount of potassium and folic acid. Since papaya is relatively cheap, available in all seasons and in most places, it gives maximum nutritional returns for the money spent.

The fruit has been revered for its medicinal value since time immemorial. It aids digestion by helping to assimilate the food better, because of the presence of a digestive enzyme, papain. Found in the raw (green) papaya, this enzyme overcomes deficiency of unhealthy mucus in the stomach and cures intestinal disorders.

Milked while unripe, the enzyme papain was consumed by Indian and Sri Lankan women to prevent pregnancy and by Far Eastern monks to kill sexual desire. Raw papaya was also believed to cause miscarriages, and hence avoided by pregnant women.

The juice of the raw papaya is also believed to have properties to destroy parasitic worms like round worms. A tablespoon of the juice mixed with the same amount of honey and diluted with some luke warm water can be taken to combat worms. Children should be given half the dosage.

Raw papaya juice also cures swellings and wounds infected by pus. If applied on the face, it is believed to be effective in healing pimples and freckles.

The ripe fruit rids the body of constipation, bleeding piles and chronic diarrhoea. Regular consumption of papaya can help prevent night blindness, an ailment caused by vitamin A deficiency, which is common in many Indian children. Pieces of papaya laid on wounds and surgical incisions have been reported to speed up their healing. Beta carotene, which is present in large quantities in papaya, is also an antioxidant and cancer preventer.

In its ripe form, papaya is used in jellies, pies, juices, salads, ice creams, marmalades, squashes and sherbets. It is delicious when eaten fresh for breakfast, drizzled with lime juice. It can also be shaken up and blended for drinks; baked for chutney or skewered and sheesh-kebabed with shrimp. Unripe, it is used as a vegetable in curries and salads and also as a meat tenderizer.

Papain also shows up in shampoos, skin creams and contact lens solutions. It is also used by breweries to clarify beer, and in tanning, wool and food industries.

When buying papaya, look for smooth skin. If firm, allow to soften at room temperature. It is a delicate fruit and cannot be stored for very long.

According to legend, this humble fruit once saved the life of a British Major, whose thigh was bleeding profusely after a jeep accident; a passing doctor broke a papaya and pressed it to his wound, which arrested the bleeding. This inspired a movie “The scent of the green papaya” that was nominated for a 1994 Academy Award for the best foreign film.

A word of caution – the black seeds of the papaya have been found to contain traces of a toxic substance called carpine, which is said to lower pulse rate and depress the nervous system. Fortunately the fleshy part of the fruit is completely free of carpine.

Finally, Papaya was named ‘the most nutritious fruit’ by the Centre for Science, USA and Christopher Columbus called it ‘the fruit of the angels’