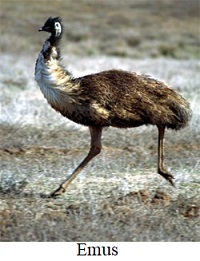 Back during the last ice age, there were beavers the size of black bears living in North America. They weighed about seven times more than beavers do today! Like their modern cousins, these giants were water-lovers, living in and around swamps, lakes, and ponds. They died out when the climate got warmer and the wet places they hung out in disappeared.

Each year thousands of female green turtles swim more than 1,000 miles from the coast of Brazil to tiny Ascension Island in the South Atlantic Ocean. There they haul themselves onto the sandy beaches, scrape out shallow nests, and deposit their eggs. Then they swim back to Brazil. 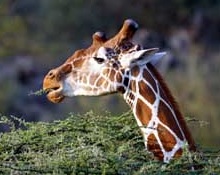 How Giraffes Compensate for Height?

They may reach the foliage in high trees without difficulties, but this comes with its disadvantages. For the blood to reach the head, a heart twice as strong as normal is needed. Also, the blood vessel system should be complex so that the blood doesn’t rush to the head when the giraffe bents over. In addition, the skin of the legs must then be extremely tight to prevent blood from pooling at the hooves.

It is commonly known that the Giraffe is the tallest animal in the world, sometimes reaching a height in excess of 18 feet. Along with it's length neck, the giraffe has a very long tongue – more than a foot and a half long. A giraffe can clean its ears with its 21-inch tongue! Giraffes are the only animals born with horns. Both males and females are born with bony knobs on the forehead.

So why do the frogs have brightly colored bodies and huge red eyes? The bright colors are a defense mechanism. If the green camouflage fails and a predator spots a sleeping frog, it swoops in for what it thinks will be a tasty meal. But the awakened frog’s eyes pop open, revealing their startling bright red color! Also, when the frog rushes to get away, it un-tucks its brightly colored legs.

The predator is often so surprised by these sudden flashes of color that it is momentarily confused and hesitates. And while it does, the frog has a split second to make its escape!