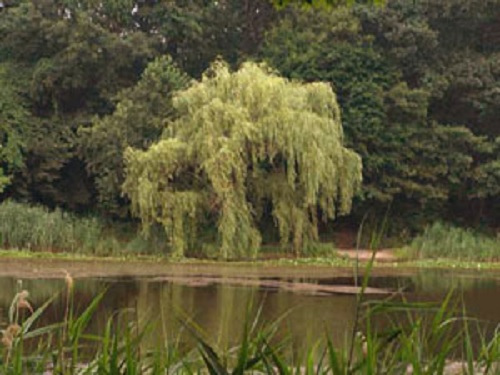 'I do think it is nice of Mona's mother to call us for lunch next Saturday' said Tinku walking back from school with her friends.

'We can play in her lovely garden in the afternoon' said Sonu.

'Well' said Ritu thoughtfully, 'I don't know if other people will think it lovely. It's terribly overgrown at the back and sort of jumbled up with trees and creepers growing into each other. You can barely tell where one begins and the other ends. My mom would call such a garden messy and untidy'.

'Mona's parents are doctors and have no time to look after the garden' said Ricky at once.

'That's just what makes Mona's garden so lovely' said Bablu, 'We can play about as much as we like without being afraid of spoiling anything or treading on flower beds!'

'To speak nothing of climbing trees' added Ashish, 'There are so many lovely, climbable ones.'

'I only hope it doesn't start raining, that's all' said Ricky.

'I don't know why you keep on harping about rain' said Tinku in a cross voice, 'It doesn't rain all the time. I'm sure it won't this sunday.'

But it did start pouring by the time they were half way through lunch, shattering Tinku's hope for a bright and sunny day.

'And now we won't be able to play in the garden after all' said Tinku looking at the dark clouds.

'I told you so' said Ricky in a triumphant voice, 'It always rains at Duliatal!'

'That's how it usually is at the hills' said Mona's mother, 'Cheer up! It will clear again soon.'

'Yes, but the whole garden will be sopping wet and we can't climb trees' said Ashish.

'But you can listen to stories from Booa-dadi' said Mona's mother, 'She is here on a visit and knows lovely stories. You will love them.' Booa-dadi was Mona's mother's aunt. She lived in Nainital and came to visit them every year.

Every one cheered up at once. It was not often that they had the chance of hearing stories. At last everything was cleared and everyone sat on the carpet with Booa-dadi at the centre.

'There are a lot of stories about Duliatal and the places near by. Do you know any of them?' she asked the children.

'No one has ever told us any' added Mona.

'I suppose that's because none of you belong here. All the local people know them' said Booa-dadi.

'What do you mean, we don't belong?' asked Bablu puzzled, 'We all live here, don't we?'

'It's not the same thing' said Booa-dadi with a smile, 'Duliatal isn't your real home, is it?'

'No, I suppose not' said Ricky.

She was quite right. Most of the children at Hilltop School had their homes in different parts of India and were here because of their parents. Ritu's father was a police officer, Bablu's father was in postal service, Mona's parents were doctors in the local hospital, Ashish's father was a businessman, Ricky's father had a bakery and Sonu's father was a retired army officer. Tinku's father, the most recent arrival, was here because he was writing a book and had come to Duliatal to collect data. All of them lived in rented houses and knew that they would go away some day.

'Please tell us about Duliatal' said Tinku, 'Was it any different long ago, when you were our age?'

'It was much livelier and people were constantly coming over from Nainital to spend week ends here' said Booa-dadi, 'Nainital was a cantonment then and a very popular one. Do you know how the hill station at Nainital came to be built?'

'No' said everyone together, 'please tell us.'

'In 1839, more than a hundred years ago, an Englishman named Barron got lost while trekking in the Almora region. It was he who discovered the Nainital lake and decided to build a colony round the lake for English people. The land round the lake belonged to a local man called Narsingh. But he refused to sell his land. So Barron played a mean trick and got it from him.'

'What trick did he play?' asked Bablu curiously.

'He pretended to be friends with Narsingh and took him rowing in the lake' said Booa dadi, 'He already knew that Narsingh couldn't swim a stroke. Barron took him to the middle of the lake and told him that if he didn't sign away his property then and there he would push him in!'

'What a mean trick!' cried Ritu, 'My father would have locked him up if he'd been there!'

'What did poor Narsingh do?' asked Mona, 'Did he give in?'

'He hadn't much choice' said Booa-dadi, 'He was terrified of water and the lake was thought to be bottomless. So he signed away his rights in Barron's notebook. That's how he built the township of Nainital.'

'Yes' agreed Booa-dadi, 'He was an unprincipled businessman and was out to make money. There are many like him in the world, there's the pity!'

'Oh please tell us, Booa-dadi' cried the children together.

'The story goes that once upon a time Lord Siva and Parvati were passing this way in the guise of human beings when Parvati felt thirsty' began Booa-dadi, 'They knocked at the door of the only hut which stood here. It belonged to an old woman who lived by herself and was too feeble to work. But when Parvati asked for water she gave her all she had collected for herself, knowing full well she could not get any water before the next day. After they left the old woman lifted the pitcher and found it full of milk.'

'How wonderful!' cried Tinku, 'Wasn't that kind of Parvati?'

'Yes. And the milk was inexhaustible.' said Booa-dadi, 'No matter how much the old woman poured from it, it remained full.'

'I wish we had one like it' said Ashish who loved milk.

'But the villagers did not believe the old woman when she told them about Parvati's visit and gift. They simply called her mad. When one of them threw down the pitcher scornfully the milk simply flowed and flowed and finally turned into a lake of milk. People called it Dudhiatal or the lake of milk at first because the water was very white and as tasty as milk. Much later the name changed to Duliatal. Possibly because the English people couldn't pronounce it.'

'That's a lovely story' said Tinku, 'I wish it were true!'

'It's true enough if you believe that everything has been created by God' said Booa-dadi.

'Booa-dadi, are there many lakes here?' asked Tinku eagerly, 'Do they all have stories?'

'I don't know if there are. But yes, there used to be sixty-six lakes in the locality when Nainital came to be built because that's what Barron wrote in his diary. Other historians have mentioned it too. They called the place 'the Westmoreland or Lake District of Kumaon'.

'Sixty-six! My goodness! Are they there still?' cried Bablu.

'No, most of them have dried up and people have forgotten about them' said Booa-dadi, 'not many know about Duliatal either, it's in such a remote corner!'

'I'm so glad we know the story of Duliatal' said Tinku.

And all her friends agreed.