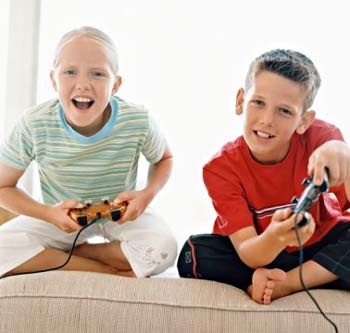 Ha! Ha! Ha! But as we laughed the car’s engine stopped working and the car stopped.

“Damn! Just 2 kilometers from Mussorie” said Abhinit. “Okay, Relax. We can walk down.” I said. It was a New Moon Night. No torch, No light… No Moon. “Oh! I can see a dim light over there!” said the driver. We all said, “Let’s Run there!” When we reached, we saw a very small cottage. As soon as we entered, we saw an old lady cooking food. She told us to come and join “Ok”. As we waited for the food, I saw, her legs were upside down! I went to her and Whoosh! I threw some of the boiling water on her and she disappeared.

We ran from there like a rabbit. As we were walking, I saw the board saying “Welcome to the unusual city”. “Huh? We had to enter Mussorie”, said Abhinit. There was a huge door saying in bold letters “Do Not Enter”.

As we opened the door, we saw a very big amusement park. We played many video games. We saw a game, named The Pool. When we pressed the start button, We Were Inside the Game.

There was a huge red pool filled with blood. There were many dead bodies in it. We ran away from there. I think we ran about 2 kilometers. There was a board saying “Level-2”!

There were many people after us, to kill us. We ran, but one guy caught us. He hit me with his sword and we were back on Level-1.

“I have played this game on my computer; we have to win the king’s crown on Level-3. In this game, we have to save the princess kidnapped by the aliens”, said Abhinit.

We again ran 2 kilometers to reach Level-2. There, I took out my lighter and when they came to kill us, we burned them. “Wooo! Mission Accomplished!”, Abhinit said.

Finally, on Level-3, I saw the princess. She was very beautiful and as white as snow. She gave us a stick. I did not know that it was a magic stick. Many people, in fact a whole army, came and took away the princess. Before going she said, “Please save me, you would get the crown in the BSK room”.

Abhinit asked, “What BSK Room? Where is BSK Room?”

We ran after the princess. There were many people covering her. I did not know how to use the magic stick, but I tried. I said, “Awaka Dabra” and Bam! All the aliens died!

Abhinit got the princess and we ran for the crown.

We went to the BSK room. Aliens were sitting and protecting the crown. “Awaka Dabra”. But it made no difference to them. The princess told me to say “Kill”. I said it, it that spell also made not difference. We had to fight them….. Hand Vs Guns!

First, we beat them like anything, but then, AWWW!!!

I got a bullet on my left leg. But then also we fought and fought. Abhinit died.

I took the crown and gave it to the princess. She did a magical spell and Abhinit and I were again alive and free and out of that game – Straight to Mussorie. Abhinit’s memory was erased. But still I have written the story and gonna to mail this to Abhinit to make him remember about the real fighters, The Kids.