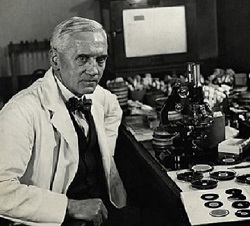 Sir Alexander Fleming (1881-1955) was a Scottish bacteriologist who discovered penicillin which became a major advance in antibiotic therapy. He studied medicine at St Mary's Hospital Medical School in London. Later, Fleming went to become its Professor of Bacteriology in 1928. During his studies he noticed that a bacterial culture was being contaminated by a mould which was producing a substance which checked bacterial growth around it. He named it penicillin.

Further studies revealed that penicillin killed organisms which caused certain infectious diseases, but it had no ill effects on animals and humans. Then It was found to be effective in pneumonia gonorrhoea. In 1945 Fleming shared the Nobel Prize in Physiology or Medicine with Ernst Boris Chain and Sir Howard Walter Florey "for the discovery  of penicilin and its curative effect in various diseases".

Penicillin, the first antibiotic used in man marks the start of the antibiotic era. In 1928 Alexander Fleming (later Sir Alexander Fleming) noted that some colonies of staphylococci were destroyed when the medium of the culture-plate was contaminated by the mould later classified as Penicillium notatum, and Fleming named the antibacterial substance as penicillin. At this stage penicillin was not available in quantities sufficient for clinical trials in man.

Research continued on penicillin until 1939 when Howard Walter Florey and Ernst Boris Chain at Oxford, England started intensive efforts to make penicillin available in sufficient amounts to carry out clinical trials. Crude Penicillin G became available for limited clinical trials in 1941. The supplies were so scanty that the antibiotic was recovered from the patient's urine and reused for further trials. In 1942 various centers in USA undertook mass production of penicillin and by 1943, sufficient quantities were produced to serve the allied forces during the Second World War. In 1944 penicillin became available for limited civilian use. The biosynthesis of penicillin up to

1958-59 depended upon the growth of Penicillium notatum and Penicillium chrysogenum (which gave a higher yield) in vat cultures. Several penicillin compounds designated as F,G,K,S,O etc. were found. But only Penicillin G  survived as the most satisfactory compound. Later synthesis of penicillin was also achieved, and Semisynthetic Penicillins

were developed. The beta-lactams (penicillins & cephalosporins) have a bactericidal effect on susceptible bacteria.

Introduction of penicillin in 1943 became an effective weapon against death, and ranks as one of the greatest accomplishments of medical research.