The Panchakanya in ancient epic literature are Ahalya, Draupadi, Kunti, Tara, and Mandodari, and in this re-issue of his famous research which commenced more than twenty years ago, Dr. Pradip Bhattacharya — the most senior Mahabharata scholar in India today — examines what it is about these unique figures which has so sustained their myth for almost three thousand years: through innumerable different kinds of media, from poetry to prose novels, from cinema and television, from local dance traditions and pan-Indic popular lore. The book is encyclopaedic in this respect and a work of fine intellectual inquiry; a multitude of artistic dimensions of inquiry supply this book with a unique and compendious approach to these ‘five virgins.’ 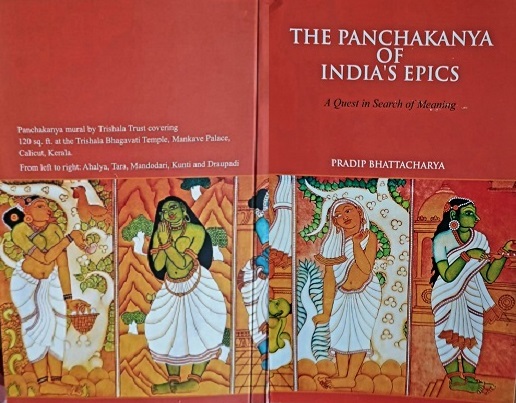 Bhattacharya begins his book with fifteen terms that depict or illustrate the qualities and stages of ancient and Sanskritic femininity; this range of subtle complexity is telling of how sophisticated is the original myth of these five morally inspired women. Let us recall, however, that Draupadi was not actually fully mortal, being born from a ritual fire rather than from human parents; in fact, apart from Kunti, none of these women were born of mortal mothers.

Feminine chastity has often been a source for agonistic contention in the poetry of Indian antiquity, but it is often a chasteness which is renewable and vital, where virginity is not something that can never be retrieved but is in fact an aspect of poetic femininity that is to be repeatedly exchanged and preserved. In that sense, femininity, like the ideas of morality itself, is conceptual and immaterial, it is a form of human consciousness and in this emotional economy there is a currency involved rather than a finite substance.

Bhattacharya begins his study with a quick survey of Panchakanya rites which exist today, in which these five ‘maidens’ are invoked and dramatised in various festivals and theatres. What it is that is so actively redemptive about these young women, the author asks, so that when these stories are re-enacted nowadays there is moral consequence for a spectating audience?

Ahalya, who is ‘flawless’, figures in both the epics, Mahabharata and Ramayana, and in several of the Puranas. She is also a character in many Twentieth Century novels and even in a television film. Ahalya was seduced by a disguised Indra who could not resist her impeccable beauty and for this defenceless infidelity she was turned to stone by the curse of her much older husband. Later, the touch of heroic Rama restored her to life. As the author asserts regarding the heroine Ahalya, ‘In the unique type of sexual encounter with non-husbands that is neither rape nor adultery lies a key to the mystery of the five virgin maidens.’

Tara, one of the two Ramayana kanyas, is renowned for her fine judgement and beauty. Mandodari, the other of these elect maidens, is likewise shrewd and correct; she is the wife of demon Ravana. Self-effacing, innocent, beautiful, she too appears in many other pre-modern and modern traditions: in poetry, ritual, dance, and in prose narrative. These two young women are competent and wise wives whose bidding is rejected by their husbands, with deadly consequence; they are strongly ethical figures.

Kunti and Draupadi are — in their separate ways during the epic Mahabharata — both responsible for the bheda or partition that occurs leading to the dreadful contention at Kurukshetra. Kunti, mother of the Pandava heroes, does not disclose that Karna is her firstborn and so the legitimate ruler; and it is the implacable wrath of Draupadi that drives her menfolk towards ultimate combat. Curiously, both women possess five partners with whom they enjoy intimate marital relations; similarly, both women select their primary husbands through the svayamvara ceremony. Along with Satyavati, the ancestral mother of the poem’s creator, Vyasa, these are central icons of womanhood not only in bronze-age antiquity but also in contemporary India. These woman are great moral authorities in their families, especially Kunti, who is the centripetal element among the Pandava half-brothers.

Kunti is of the Yadava clan and — through the discreet guidance of Krishna and somewhat of Bhishma — it is this clan which ultimately triumphs after the great Bharata war, insofar as Yadava scions occupy the thrones at Hastinapura and Indraprastha. Kunti is thus subtly instrumental in this political progress.

Draupadi is arguably the most abjected of these five women, being so psychically injured in the sabha at Hastinapura and hence, she possesses a rage unlike any of the others. She is not ravished, but worse, severely abused and it is this anger which drives the central plot of the epic poem. For this reason Draupadi has become an emblem for many metropolitan feminists in India today, especially after the late Twentieth Century film version of the Mahabharata by Chopra. Of all her husbands, however, it is Bhima with whom she appears to share the greatest affection and intimacy. She and her mother-in-law Kunti are the two women in the poem who are constantly exhorting and reminding their menfolk about right ksatriya dharma, they are the ones who repeatedly pronounce these warrior truths and conventions.

Says the author, ‘The kanyas remain quintessentially virgins and, except for Kunti, hardly ever assume the position of mother.’ They display no supernatural abilities, despite their more than mortal origins, and they all experience extreme conditions of loss, whereby their grief becomes profound. ‘The kanya, despite having husband and children, remains alone to the last.’

The signal strength of this book lies in its exhaustive reference to many diverse and historically various sources, from early Indo-Aryan slokas to the post-modernist silver screen. Bhattacharya is meticulous in both summary and delivery of his research data and his analyses of the material are conceptually rigorous, bringing much to our understanding of the social and literary generation of the feminine in India today. He concludes this excellent study with the statement that, ‘It is the ability to distinguish the masculine power of logos, the power of words, of thought, of will and of acting in the outside world that makes the kanya so significant to women today … The past does indeed hold the future in its womb.’