In today’s media world there are very few journalists who have not sold themselves and have remained unbiased. The power of the pen being such that journalists or columnists get sucked into the power- play of different ideologies, even different shades of opinions. Politics is the art of the possible and when people from media are not true to their profession they walk across to whoever offers them the highest bid. Thus there are elements of sale and purchase in the profession. There are, of course, others who consciously descend to the journalistic depths for love of money or for sheer hatred. It is thus difficult in the current times to identify a journalist or a columnist who is unbiased and whose credentials are clean.

For a long time I have been reading the columns of Tavleen Singh, initially in India Today and currently in the Indian Express in its Sunday edition. I have found her writings objective and free of bias. She does her reporting from the field and her opinions are formed by what she observes and hears there. No wonder she has remained in the forefront among journalists of corresponding calibre. How she maintains her equilibrium and is not swayed by temptations of power and glory is something inexplicable. Perhaps, it is because she has independent sources of sustenance. And, of course, her live-in partner of thirty-odd years has been a solid support for her. Even then one must concede that she has refrained from falling prey to the big, wild world of politics infested more with wolves than with humans – where it is difficult to keep oneself stable but very easy to succumb to its false charms. 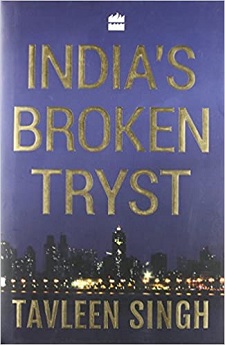 Having read her columns I eagerly took up her book “India’s broken tryst” when it came my way. It is a sweeping coverage of post-independent India and its politics from Nehru down to Modi. As the book was published in 2016 it covers only the first few months of Modi’s regime. But its pages are packed with human content from Nehru’s period down to virtually the present day. The most outstanding feature of this period was how Indian National Congress, after 50 years of its rule, left the country almost at the same place where it was at the time of independence in 1947. During this period China, South Korea, the “East Asian Tigers” all became economic giants with China emerging as a super power of the world – able to tell off the US not to mess with it. While it was at the same level of development as India in 1948, China quickly shifted gears to hit double digit growth. We in India during this period were, apparently, happy with, what has been disdainfully called, the “Hindu Rate of Growth” of around 3% with official and political corruption hitting all time high.

Tavleen travelled several times through Uttar Pradesh. Having seen it from close quarters she has described the state’s poverty in graphic terms giving vivid details. The uncontrolled population, absence of healthcare and primary or secondary education have contributed immensely to perpetuation of poverty in the state’s villages. Years of lack of governance has deprived the village community of the wherewithal to survive with dignity. Come to think of it, decades of Congress rule did not eradicate poverty, malnutrition, illiteracy and  absence of healthcare and civic amenities that are available to a civilized society made the situation more abject reducing the people to the level of wretched of the earth. Indira Gandhi’s slogan “garibi hatao” survived as only a slogan without making a dent on poverty in the state, indeed the entire country.

The same is true of the era of Sonia Gandhi, daughter in-law of Indira Gandhi, who had contested elections from Rae Bareli for the last two decades or so and yet the situation in her constituency and its villages are in a shamble. She or her son Rahul Gandhi who won from Amethi did not do one bit for their respective constituencies. This was more reprehensible as Sonia was the de-facto prime minister running the UPA II government by remote control on the advice of her Leftist friends brimming over in the National Advisory Council. And yet, superseding the Prime Minister Manmohan Singh did not bring any succour to her constituents or kudos to her or her Advisory Council.

Tavleen Singh says Sonia cannot stand honest criticism and can be vicious in her response. Just because Tavleen used to write uncomplimentary pieces against her Sonia Gandhi had construction at Lavasa being carried out by her partner stopped which was later rescinded by the judiciary. This, however, stalled the project for three years. This was conceptually the first hill town to be built after independence on the Western Ghats. The builder, Ajit Gulabchand, derived inspiration from the Italian hillside town of Portofino.

Tavleen Singh has given pride of place in the book to the pavement dwellers of South Mumbai. Sharing, as she did, a luxury flat with her partner in the NCPA Apartments she curiously became an altruistic friend of many of the dwellers of the nearby jhuggis and jhopris and homeless people. She tried and rendered assistance to them with love, money and her precious time. But, what is important is that through their troubles and tribulations and the rigours of their interfaces with petty bureaucracy and the magistracy she reveals the State’s corrupt, cold and heartless treatment of the poor. Their crushing poverty was bad enough, the unsympathetic treatment given to them by the agents of the so called “welfare state” was worse.

The book covers only about a year and a half of Modi’s regime. She started almost as a “Modi Bhakt” and was impressed by the changes wrought by him in Gujarat. She was one of the very few journalists who espied a Modi wave in late 2013. Very few politicians saw it coming and the Congressmen, of course, were sanguine that Sonia would lead them back once again to the Raisina Hill. Modi, the “chaiwalla”, as Mani Shankar Iyer said, just had no chance. As Modi chose Varanasi as his constituency she invested her time in it and stomped through its filth and grime to interview people just to get the sense of what voters thought of Modi. She saw unmistakable signs of Modi romping home victorious.

She was on the same page as me in so far as Modi was concerned. Without caring much for the Hindutva Brigade we wanted Modi to win as he looked like one politician who could turn the tide in favour of the country. But soon after he formed the government his party’s motormouths started issuing statements that embarrassed the new prime minister. Modi’s procrastinations in responding did not help. That is when he disappointed many of us. Tavleen, too, expressed it but, later, in her columns was more vehement.

Written in a racy style the book is eminently readable. I must say that I have never come across a book of political history as absorbing and interesting as this one. As it gives one sense of recent history it is all the more interesting. Its protagonists walked the earth when we too were around bringing in an element of familiarity.