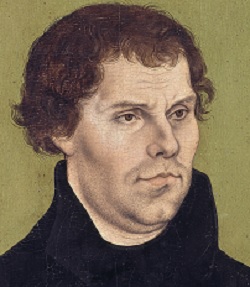 Martin Luther (1483-1546) was a German Christian Church reformer, and founder of protestantism. He launched the Protestant Reformation making fundamental changes in the Roman Catholic Church. He was a miner's son born into a pious family at Eleben in Eastern Germany. He studied philosophy and classical literature at the University of Efurt, and joined the Augustanian order of monks. In 1507 he was ordained as a priest and became a professor of philosophy and theology at. Wittenburg.

In Luther's time the Roman church gradually wielded great political and spiritual power, filling the gap by the collapseof the Western Roman Empire. Political power often breeds corruption and so it also happened in the church. There were widespread abuses, and one of them was the selling of indulgences. Here a believer paid money to the Church, and the church would guarantee his escape from the wrath of God's judgementin the afterlife.

Luther began to speak out against the corrupt church practices, and a growing discontent emerged within the church itself. On October 31, 1517 he posted a document on the door of the Castle Church in Wittenburg. It was titled as "The 95 Theses Against the Abuse of Indulgences", and accused the Archbishop of Mainz of fraud in the sale of indulgences, who was alleged to have pocketed the money.

This action attracted a great support by the people. Pope Leo X

(1475-1521) demanded that Luther must retract his charges. But Martin Luther refused and in 1521 he was excommunicated . Many church members followed his lead, and broke away from the church. Later, Luther himself organised a new religious movement that embraced the teachings of Christianity, but rejected the political authority of the Pope in Rome. Today, Lutheranism is a dominant religion in Germany, and parts of North America.

The revolution launched by Martin Luther did not destroy the Roman Church, but actually saved it. He forced church officials to confront their shortcomings in the church. Luther he created an alternative form of christianity, but compelled Rome to curb the political abuses.

Thus, Martin Luther was a German christian reformer and was the founder of protestantism, and leader of the reformation. He was deeply concerned about the problem of salvation. Later, he retired from the leadership of the protestant movement.