- An Enduring Icon or An Irrelevant Monolith

When Robert Zimmerman ask you to

“dance beneath the diamond sky
with one hand waving free,
silhouetted by the sea,
circled by the circus sands,
driven deep beneath the waves,
forget about today until tomorrow,”

it’s more than a humble request; he is imploring you. 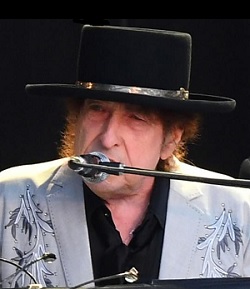 When Bob Dylan sings of Johanna, about how “the ghost of electricity howls on the bones of her face", these visions of Johanna have taken my place”, he is asking you to believe in the impossible, in the surreal and the supernatural, in the extraordinary vision of the true artist. In the pantheon of great, bona-fide artists, Dylan stands supreme, as a songwriter, lyricist, narrator, historian, observer of the world, prophet, philosopher, itinerant traveller, a modern Homer and Virgil rolled into one.

He sang about the nuclear war and Armageddon, sensitive, frightening subjects, long before anyone even thought about them as suitable material for songs. For a singer in his mid-twenties, to have this vision, foresight, intelligence and eloquence, to have the musical and lyrical nous, to bring delicate, difficult topics so vividly to life and to turn them into symbols and portents, to make them into timeless music, is a most remarkable feat. But then Dylan is no mere or ordinary singer/songwriter; he is something much more, a totemic, modern and even post-modern, protean historian and chronicler of our time. While getting older, he has changed as all artists must in order to move with the times, to survive, to discover fresh inspiration, to engage in an eternal journey to find a new muse, new horizons and a telepathic mojo.

An artist can never stand still or look back at his output; that is an anathema to him. In the case of Dylan, his repertoire is such that anything new will always be compared to and judged by, his vast canon of evergreen, lyrically dense often obtuse, but always meaningful, vignettes steeped in rich imagery, with the knack of putting himself and the listener, right in the middle of a song, like characters in a play or a Wagnerian opera. These centrifugal actors are then moved around and shuffled, from verse to verse, appearing, disappearing and reappearing in the context of a song, to move it forward, to imbue it with emotion and feeling, as it reaches its conclusion. They could be in a historical or current setting, there could be action or they could be voicing the writer’s stream of consciousness thoughts, rather in the manner of James Joyce; they are ambiguous and peripheral, sometimes functional, occasionally colourful. They are ordinary, often in extraordinary circumstances, like interlopers dropping by for a brief period, before moving on. This is what makes Dylan so masterful; he makes the unreal very real, the words bathed in cinematic and painterly imagery, the characters waiting in the wings when the moment is right.

In Tangled Up in Blue, when he sings, “I must admit to feeling uneasy when she bent down the tie the laces of my shoe, tangled up in blue”, it captures a moment, in a very few words, where everything is so clearly defined: the setting, the reunion between the two characters moving in different directions, the range of emotions produced by the very simple act of tying shoelaces, in a bar in Delacroix where the narrator stops for a beer. Geography is very important to Dylan and when it comes to analysing his songs; the characters are placed in a particular place at a specific time while they are on the move. The paradox is that they could be anywhere and in any time, even somewhere nondescript. But the context makes them come alive before our eyes; the music just enhances our appreciation of the writer’s point of view.

As a singer, Dylan is rather limited in terms of his range. He is a wonderful singer of his own songs, but not a technically great singer per se. Over the years and decades, the voice has been reduced to a nasal croak or a groan; this is the price he’s had to pay for singing difficult and different songs, often very intense, personal and emotionally raw, moving and powerful. Performing live, his limitations become clear as he changes the musical arrangements or sings in a different key so as to work within his limitations. But this adjustment or adaptation is necessary in order to survive, though he has often mutilated some of his songs on stage by changing the arrangements to such an extent that the songs are not recognisable. However, when he is in the right groove and mood, in a recording studio, at ease with himself and his environment, he doesn’t just sing songs, he captures and embodies their true spirit and meaning, the pitch, the intoning, the phrasing, the coaxing, the entreaties, the rhythm and the rhyming, fusing together to turn it into a transformative and mystical experience. He doesn’t just sing, but releases and liberates words from their shackles so that they have an independent life of their own. His words are often bathed in history and mystery, rooted in the past, present and future, together or separate, till their identity and meaning is both clear and ambiguous, paradoxical and contradictory.

His latest record, Rough and Rowdy Ways, is his 39th studio album; it is a collection of new songs, his first since 2012’s Tempest and should be a cause of celebration. The pace is relaxed, the voice mellow and assured, without any flourishes, the instrumentation sparse, minimal and supportive, the songs seem to flow seamlessly; the imagery is rich, imbued with visions of the past and present, the tone largely autobiographical. The songs are typically eclectic, short, medium-length or very long, imbued with the writer’s musings, reflections and ruminations; they collectively seem to represent a mosaic or a map of an ever-changing world, the omnipresent old man chronicling historical events and figures, as he watches and narrates, being a part of the past and present, an outsider who was once an insider. There are historical references galore, famous names are given a front-row seat and locations are given their rightful place in this rich tapestry of mythical and real history, The assassination of President Kennedy in 1963 seems to act as a spur so that subsequent events and changes are examined in the aftermath of this cataclysmic event. It is a very satisfactory collection of songs, a mature work from an august master; one or two of the songs sound quite similar in tone as if they were done in the same session, but Dylan cleverly shifts a key or two, adds an extra chord, a recurring melody so that the songs are subtly different, as in the case of Key West, which is reminiscent of Lou Reed’s Walk on the Wild Side. Murder Most Foul has a grand historical sweep to put it into a wider context of societal changes, described by Dylan in a half-spoken, half-sung lines as if he was having a dialogue with himself.

Dylanologists, as his fans are called, will enjoy themselves, scouring and analysing the dense lyrics for hidden meanings, deciphering layers within the structure of songs, names and references to pore over to see the exact context of these songs and whether they are allegories, mere stories or multi-stranded narratives. But it would be foolish to join this club because it’s a lifetime’s obsession. His former paramour, Joan Baez, once argued that Dylan is an ocean, even many oceans that one can dip into without ever getting close to each and every corner. His songs are novels and short stories, poems and polemics, odes, elegies, tales of love, affection and beautifully drawn characters. It is not an exaggeration to say that he is a universe, independent of, and within our own, universe, an inexhaustible reservoir of separate and connected stories from the hinterland of a continent. He is the modern Dickens and Tolstoy, each song an unfinished novella.

In the seventies, when he was struggling for inspiration, Dylan sought the guidance of the painter and philosopher Norman Raeben. Under his tutelage, he learnt to think differently, gaining a fresh perspective. He was taught about the holy trinity of love, beauty and truth, in the manner of the English poet, John Keats; he also realised it was possible to compress time, to write consciously about what he felt subconsciously, that reminiscences could be imbued with stream of consciousness thoughts, to produce stories that were within a certain time frame, but could exist outside it too. A keen student, Dylan came up with Blood On the Tracks in 1975, a collection of very personal and painful songs that is now considered one of the greatest albums ever; it literally overflows with pain, separation, brief moments of joy, anger, torment, loneliness and betrayal.

The present Dylan is content, unencumbered by the weight of history, expectation, fading powers and old age. Picasso and Dali continued to work into their eighties. He can afford to look forward and smile; look back with pride upon a body of work that is a touchstone for others to emulate; but no-one will get even close. The older Dylan is the new norm, not just pure gold, but an eternal beacon, a ray of hope and sublime constancy.

The 11-minute song, Sad-Eyed Lady of the Lowlands should never end!