This year is the 60th anniversary of the Apartment, and though heralded on its initial release, it has tended to be forgotten, often dismissed as a mere tragi-comedy, a lightweight, likeable but inconsequential film, in comparison with the great director’s other substantial, socially conscious and more driven films of the forties and fifties.  Perhaps therein lies the dilemma of it not being taken seriously: it has sophistication, but no swagger; it is witty and pleasing on the eye, without memorable set-pieces except the climactic scene where Shirley MacLaine runs through the streets of New York, seemingly on cloud nine in a transcendent moment; it is sharp and incisive in its portrayal of the human condition, but without the cynicism and wickedness which have characterised many of the director’s great films. It just goes about its business of telling a story in a quiet, understated way in a modern New York while keeping stylistic and dramatic flourishes at bay.  Its luminous simplicity is its great strength; its tone and symmetry are so perfect as to beguile and bewitch you.  It washes over you like a great wave until you recover your poise in the aftermath of its wake and realise the full impact of what you’ve just seen. 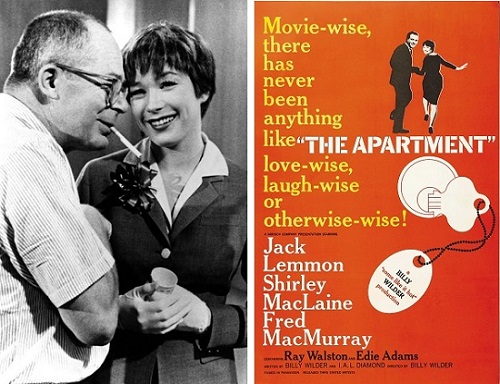 The central driving thrust of the film is loneliness. The irony is that in a big city, with people mixing in confined settings and working in a claustrophobic environment, it is hard to envisage being lonely and alone, given the social and professional interaction that is at work both in offices and outside in bars, restaurants, cinemas, theatres, sporting arenas and other such places. The two main characters in the film, an insurance clerk played by Jack Lemmon and the elevator girl, played by Shirley MacLaine, are both lonely and allow themselves to be used by their superiors. Their lonely existence recalls the pain suffered by the policeman in Nick Ray’s On Dangerous Ground made nine years earlier. Here the policeman lives alone in a big city; he has no close friends and is stripped of all humanity by the criminal underworld he has to deal with every day. Sent out in the country to find his true self, a blind girl discovers his loneliness when she tells him: “People who are never alone are the loneliest in the world”; it is hard to contemplate a person being lonely in a big city given the opportunities for socialising with kindred spirits. But that is the reality of living in a metropolis, especially if your work is your raison d’etre; you are swallowed by the noise, the vibrancy and the social culture, the demand and pressures of making a mark, along with diffidence, introversion and lack of social skills.

The Lemmon and MacLaine characters, C C Baxter and Fran Kubilek, are both fragile and damaged souls lost in the overcrowded city. She has an ongoing romance with the personnel manager who wants to leave his wife and children for her, but never does and his empty promises show him to be an unreliable, immoral character. Thus she lives only for the present since the future with an older man is not promising. Baxter is sincere but has very low grasp of what he is or his moral compass; he allow himself to be used by his philandering superiors, even on cold winter evenings with him watching his apartment from outside on the pavement. He has no family and there are no photographs of his parents or any siblings; we never get to know where he comes from. Thus he is a lone outsider in a big city, on good terms with his doctor neighbour, but beyond this there is a void; the fact that he suffers for the sins of others gives him a redeeming, almost Christ-like quality until the moment of enlightenment and awakening arrives, when his true mortal self comes to the fore.

It is typical of Wilder that by the simple device of two keys, one to Baxter’s apartment where he saves Miss Kubilek’s life and the other to the executive washroom after his promotion, that he elevates the film to something quite remarkable, achieving greatness on the simplest of premise. One of the keys we have seen throughout the film; the other we only see once, may be twice when Baxter returns it to Mr Sheldrake, the personnel manager, before walking out of the office. This is his moment of awakening, his epiphany, his liberation and release. These scenes are handled with such care and spartan simplicity that they achieve a grandeur and majesty on a human level.

Hollywood was changing by the time the Apartment came on the scene. In many ways it is a link, the bridge between the old and new systems. Directors like Kubrick, Frankenheimer, Ritt, Penn with Peckinpah soon to follow, had a more radical, obsessive, fiercely independent, daring and more contemporary approach to film-making with the man at the helm being the complete auteur; although they worked within the studio system, they challenged it so that films were within the system and outside it too. Often they were revolutionary in their idealism, technique and style. By contrast, Wilder worked according to the studio diktat and knew how far to go with these restrictions; he was comfortable in his metier and had a great belief in his convictions; he was a craftsman and knew how to mould the system to his benefit. The old studio system, often hackneyed, archaic and formulaic, was soon to give way to dealing with difficult, psychologically dense, more modern themes.

The Apartment came out a year after Some Like It Hot and suffered because of it for years. While the latter is a great comedy film, with a trio of top stars, it appears dated today. It tries too hard for laughs; some of the gags are too stretched and unconvincing; it is an uneasy amalgam of a gangster film and a farce, sometimes too frantic to stand up to repeated viewings. The Apartment by contrast has great balance and symmetry; described as a tragi-comedy, it is neither and both; this paradox works to its advantage. It has humour and warmth; melancholy and pathos; empathy and sympathy for the two leads; thus we have rapport and feelings for both of them. They have been dealt a bad blow by fate, condemned to disappointment and rejection, used and abused, their innate decency stripped away till they are ridiculed and diminished.

Orson Welles once said that black and white was an actor’s best friend. The Apartment shimmers and glows in its monochrome radiance. The cinematographer, Joseph LaShelle, captures the moods of the city and the subtle, nuanced performances of the two leads with great clarity. The casting of Lemmon and MacLaine is so perfect it’s impossible to imagine anyone else playing the two characters; both capture the full range of emotions perfectly, without straining or stretching, or reaching for unnecessary histrionics, helped by Wilder’s guiding hand leading the film seamlessly, from melancholy, humour, to eventual joy. By the end, the two are no longer alone; at the finale, in the eponymous apartment, she tells him to “shut up and deal” cards. Verily they now hold all the aces.

Ultimately, the Apartment is a fabulous humanist film When the Lemmon character achieves redemption, he does so for all of mankind, for every single John Doe in the world; starting from a customised fool, to an amoral careerist on an upward ladder with his own executive washroom, to his moral awakening at the end of a difficult year, he has come a full circle. After handing the key to the said washroom to Mr. Sheldrake, he tells his manager he wouldn’t understand before walking out of the building; but we do and applaud him for it. The world suddenly becomes a better and richer place with an act of defiance from a subjugated, diffident man now standing very tall.