‘Pinging Pangs’ aroused my curiosity for two reasons-the choice of the title and its unconventional looks, akin to a cheque book.  This slim volume features fifty poems by N. Meera Raghavendra Rao, who, in her new role as poet has clearly demonstrated that she can engage readers through prose or poesy, also leave them asking for more. 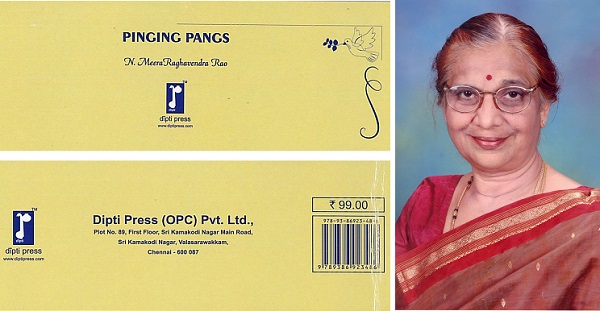 A veteran journalist, photo journalist, teacher, writer, blogger, author of ten books, reviewer, interviewer… amongst many other hats she wears, hence, it is no surprise that N. Meera Raghavendra Rao has been ‘inspired’ to take up poetry as a medium to express her ‘take on life.’ N. Meera Raghavendra Rao’s book of free verses with a significant foreword by R. Chitra, senior journalist, talks about people, places and happenings in our everyday lives, which leave us with a multitude of emotions, opinions, thoughts and learnings. Every poem has a message, either direct or cryptic. There is also an element of humour in many of the verses.

‘An Interesting lady…’ on page1 brings in visual images of the finely attired guests seated in the wedding hall, indulging in small conversations, patiently awaiting the entry of the newly married couple.   In her unique humorous way, the poet writes-

‘……she picked up a conversation
Wanting to know all about me
Noticed she wasn’t interested…...’
And in the concluding lines
‘And broke into a song immediately
Which was more welcoming
Than futile conversing!’ (page 1)

In Age- A Leveller!... and Why I stood out…..  the need to accept all facets of life,   aging gracefully in particular is well illustrated, with a powerful message that the clock cannot be turned back!

“Mine gray and his jet black,
Attempting to turn the clock back…’(page 5)

Often, there is a lot of learning from the helpers in our neighbourhood; the raconteur-poet reveals an interesting tête-à-tête with her ‘neighbour’s maid’ in ‘Tea for Two….’

The above lines also offer insights into the lifestyle of the poet. Her morning walks fulfil the exercising routine, also leaves her with the opportunity to exchange pleasantries with the familiar faces in the neighbourhood. After all, a cheerful smile can brighten another’s day, provided one has the heart to smile.

In ‘Tea for Two,’ the concluding lines leave much to interpret about the unsung heroine aka the maid, who, despite her penury has a heart of gold.

‘Collecting her cup of chai
She asked for a second cup
Offering the chai to me
Requesting me to give her company.’(page 11)

The very mention of ‘street food’ evokes mixed feelings in every one of us.  The poet is no exception, her ‘five senses are engaged,’ while her ‘nose starts protesting’ as she  listens to the ‘cacophony’ and ‘men chatting while gorging on puris vadas and bajjis’ in ‘Street Food….’  Eventually, the mind wins the battle!

‘Though tempted to touch and gobble
I resist to avoid trouble! (page 21)

Chennai’s Potpourri has some appealing verses. Three small poems caught my attention. The first one ‘Granny’s Spectacles,’ (page 29) is about a mischievous little girl who is frightened when ‘everything appeared blurred’ and her ‘granny disappeared.’

The second poem ‘Authors and Readers’ (page 33) talks about the mushrooming growth of ‘authors everywhere’, while ‘readers are elsewhere.’ The punchlines are:

‘And you are not bothered
When you find it’s not the one you authored!’(page 33)

Personally, this poem reminds me of the innumerable  ‘Likes’ on Facebook that prove to be the only telltale signs of  friends or acquaintances who have stopped by for that split second, before racing off to the next post on the social media site.

‘Those music lovers’………with its candid humour talks about the air-conditioned concert halls ‘with attached food stalls.’  The last two lines in the poem blurt out the truth:

‘Some enjoy music glued to their seats
Others enjoy the everyday Fest!’ (page 35)

The poet talks about the Indian fondness and partiality to the ‘fair person’ in ‘Oh, to be Fair….’

‘As Indians we are brown or dark
Probably with a few exceptions.’ (page41)

Why then are we obsessed with ‘someone who is fair?’(page 41)

From fairness, the poet moves on to ‘designer blouses’ and the fashion statements of women that leave a ‘dent in women’s purses.’  The title is explicit - ‘In today gone tomorrow.’(page 43)

In the Divinity section, ‘Power above...’ delivers a compelling message that prove to be maxims for life:

‘Let not arrogance overtake you
And humility elude you.’ (page 56)

The poet talks about ‘Destination weddings…’ where each one is busy performing their roles:

‘And the bride and groom
Looking brighter than the Moon
Eyes focused on each other
And those of wedding guest
On the multicuisine spread.’(page 71)

Unfortunately, the onset of the pandemonium has temporarily halted such dream weddings, most weddings at present are occasions with extended families around.

Endearing Madras…. (page 75) is filled with nostalgia of a ‘home for decades.’

The lines ‘with no hassles whatsoever,’ ‘was within one’s reach,’ ‘there was no cause for complaints’ and ‘Today it is Madras of old no more’ reveal a twinge of melancholy  that increasing urbanization and technology have brought about  in Madras aka Chennai  that is about three hundred and eighty years old. However, the optimistic temperament of the poet surfaces in the last two lines:

“But for me Madras is the SAME
Endearing and Enticing as BEFORE.’ (page 75)

My mother’s golden words…… (page 83) touched the core of my being, for, it brought reminiscences of my biological mother.

Such motherly advice held young brides in good stead as they learnt to adapt, accept and tolerate the members in the ‘adopted family. The Indian way of life promoted the ‘My family’ sentiments, never permitting feelings of ‘I, me and mine.’

The book also has lines for an ‘unforgettable aunt,’ who was not a relative,  ‘true friend,’ a neighbour who doubled up as a mentor and ‘a good man’  where the poet pays tribute to her sibling.  These micro verses reveal the amicable nature of the poet, projects her as a person who values relationships in life.

In conclusion, this book of poems can be browsed without a dictionary - even as I write this, I recall Shashi Tharoor interviewing Sudha Murthy, where the author reveals the need to write in simple English. People may be reading the book while cooking, while doing other domestic chores, so they cannot rush to get a dictionary…   ‘Pinging Pangs’ will leave you energized and active….

So, grab a copy today.

About the poet: Meera Raghavendra Rao, a postgraduate in English Literature, with a diploma in Journalism is a freelance journalist, author, reviewer and blogger has published around 2000 articles (including book reviews) of different genre which appeared in The Hindu, Indian Express and The Deccan Herald.  Besides, she is the author of 10 books: Madras Mosaic, Slice of Life, Chennai Collage, Journalism-think out of the Box, to mention a few. Her book ‘Feature writing’ published by Prentice Hall, India and Madhwas of Madras published by Palaniappa Bros. had two editions. She has interviewed several I.A.S. officials, industrialists and Social workers  on AIR and TV, was interviewed by the media subsequent to her book launches and profiled in Tiger Tales, inhouse magazine of Tiger Airlines.
Her blog: https://justlies.wordpress.com/