What is Consciousness? - A Conjecture

Since time immemorial mankind has always wondered what is consciousness and where is it located in the brain. Some recent scientific discoveries may provide a possible answer.

Awareness is an outcome of thought. It is the thinking brain that makes us aware of our existence and externalities. If we can understand what is thought and from where it originates in the brain then we may shed some light on the mystery of consciousness.

It is an accepted fact that thought is produced when brain neurons fire. There are close to 100 billion neurons in the brain (the exact figure is not known). For simple thought like what is the colour of flower, open the door etc. small portions of neurons fire but in deep concentration leading to Samadhi and Sanyam (combination of concentration and contemplation on a single subject or object) almost all the neurons fire to produce a deep thought.

Activation of neural pathways trigger firing of neurons. This activation is triggered either by signals from sense organs or stimulation of certain memory space in the brain. Neural pathways help neurons to communicate with each other. During this communication electrical signal from a neuron is converted into chemicals (neurotransmitters) and transmitted across the synaptic cleft to another neuron where it is again converted to electrical signal for onward journey. 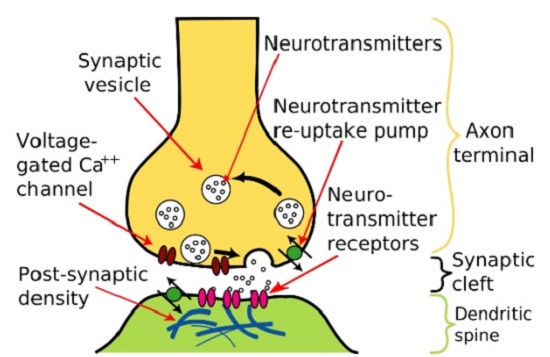 Synaptic cleft is a tiny space of about 20 nanometers (nm) between two neurons and is the place where the neurons exchange information via neurotransmitters (NT). 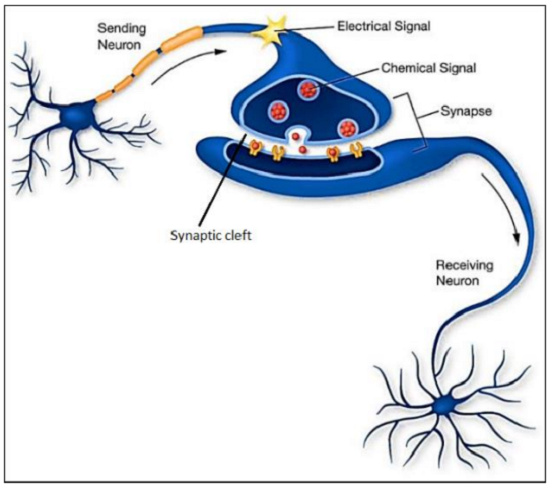 A neuron has three parts. At one end is dendrite which accepts NT from other neurons; the central nucleus which is the heart of neuron and a long nerve fiber called axon whose end (synapse) releases the NT for transmitting to other neuron. Why did nature produce this type of communication system where the electrical signal from the neuron is first converted into chemicals (neurotransmitters), and transmitted through synaptic cleft and again converted back into electrical signal?

A possible answer could be that during this conversion in synaptic cleft photons are produced which are the signature of thought. This information was discovered in late 2010s when scientists detected very low energy photons (in far infrared region) were being emitted during the firing of neurons and transfer of neurotransmitters across the synaptic cleft. Scientists are still not sure in what way brain uses these photons but speculate that somehow they may help in increasing communication between various parts of the brain. I conjecture that these photons from large number of neural pathways synchronize to form a three-dimensional hologram which we can call a thought.

The emerging science of synchronization might help to explain how photons might synchronize to form a thought. This field emerged when it became possible to explain successfully how a very large number of fireflies start glowing in a synchronous manner in a short time after their random initial firing. Similarly, it also explained how large number of cells in heart synchronized to produce pumping action. Thus the synchronization of fireflies glowing, heart cells beating (peace maker) etc. are all outcomes of a spontaneous order by which a large number of similar objects or oscillators work or fire in unison to produce the desired end result.

These signals synchronize spontaneously since they are influenced by each other via a positive feedback-type mechanism. For example in case of fireflies this feedback is through their light signals where they adjust their phases so that they synchronize and in heart cells it is through mechanical coupling. In a similar way it is possible that the weak photons produced during firing of neurons synchronize and form a thought-hologram. This is the genesis of consciousness and internal awareness.

The synchronization of weak photons is guided by an entity called ‘I’ (ego, will, etc.) which acts like a symphony director and helps provide the necessary energy and focus to maintain a given thought for a longer time. Ego “I” also
compares this thought constantly with signals from outside to provide us a sense of reality. This is the genesis of surrounding awareness.

We still do not understand completely how “I” can influence this process, but just like the music conductor who determines which part of the orchestra plays for how long, ‘I’ decides how long a particular thought will remain in the “vision” field. This process is called concentration and seems to also exist in animals.

The production of weak photons for thought formation could also be the reason why many Yogis have experienced seeing white light during intense meditation. Similarly the observation of white light by persons during near death experience (NDE) could be an outcome of nearly all the brain neurons firing during the final exit.

Since synaptic cleft plays a major part in thought production it is important that it is kept clean. It accumulates a lot of NT debris during the waking cycle.

The cleaning of cleft takes place during sleep when the cleft expands and the cerebrospinal fluid which floods the brain helps flush out the debris. With inadequate and disturbed sleep the cleft starts getting cluttered with debris.

Sleep deprivation in the long run may lead to dementia and other mental disorders since the neural pathways are reduced.

Memory resides in the arrangement of neural pathways firing. With strengthening of synapses in these pathways strong memories and a powerful brain results. Such a brain produces wisdom and happiness. That is what Patanjali has said in his Yoga Sutras.

Since the firing of neurons for a thought is from different parts of brain there is no single place where we can say that the thought originates. Thus the consciousness exists but one is not sure where in brain it is. This is just like music which one can never say where it is but when played by musicians exists!

Originally published in a different avatar as Where thoughts originate in the brain. February 2020.